Confidence in Housing Market High as Concerns about Finances Linger

New Freddie Mac research shows the uncertainty renters and homeowners have about their ability to pay their rent or mortgage during the pandemic. This survey, of which two-thirds of respondents are homeowners and one-third are renters, shows that although homeowners and renters continue to feel the economic pressure of the pandemic, those figures have improved and are down from the all-time high reached in October and November of 2020.

Key points within the survey include the following:

Throughout 2020, more than half of surveyed renters remained concerned about their ability to make housing payments, fluctuating between 54% (April) and 71% (November) during the year. In December, renter concern showed a slight improvement at 67% and dropped to 63% in February 2021. Meanwhile, over the course of 2020, homeowner concern about making payments fluctuated between 33% (June) and 55% (October), ending the year at 45%. Those numbers have further improved to 41% in February 2021. As of December 2020, 27% of homeowners and 35% of renters had asked for a housing payment postponement, most commonly due to uncertainty over making payments beyond the next one. By February of this year, those numbers dropped to 19% of homeowners and 28% of renters.

Confidence in the Housing Market is High

Confidence in the housing market fluctuated between 48% (April) and 69% (October) but remained high overall, averaging 60% in all of 2020. As of February 2021, confidence has improved to 66%. During 2020, renters were more likely than existing homeowners to buy homes, with many shifting into homeownership through the late summer and early fall. The likelihood of homeowners to sell their homes (18%) and renters looking to purchase a home (34%) has held steady since the beginning of 2021. Likewise, refinance activity remains strong, with nearly a third of homeowners indicating they were likely to refinance their home within the first six months of this year. 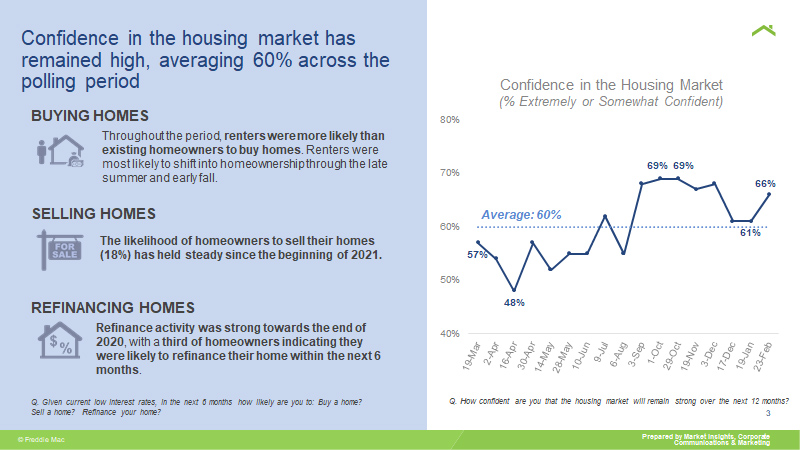 While many homeowners and renters are struggling financially, 72% of currently employed respondents were confident they will maintain the same level of income through the first half of this year. As of February 2021, 43% of respondents were living payday-to-payday and had just enough to get by, while 17% didn’t have enough for the basics until the next payday. Forty percent cited that they had enough to go beyond payday. 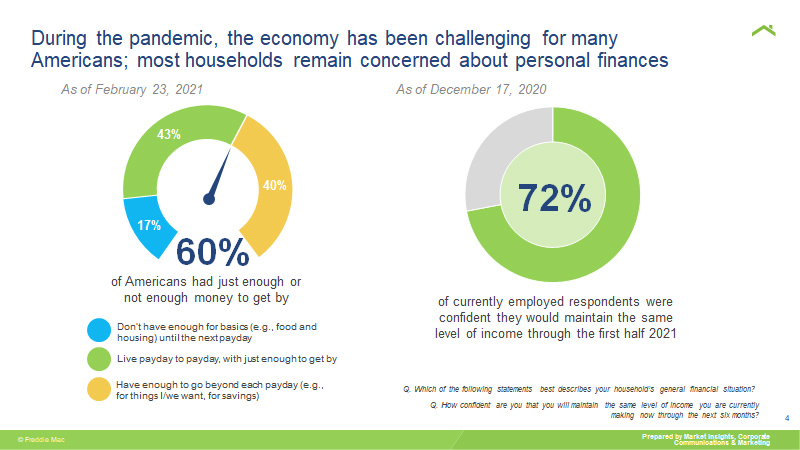 Partnering with Heart+Mind Strategies, this COVID-19 Tracking Poll has been fielded on a biweekly or monthly basis, depending on market conditions since March of 2020 where 1,000-1,035 individuals responded to the questions based on what they have been experiencing during this uncertain time.