New consumer research from Freddie Mac found that the pandemic disrupted the homeownership goals of single female heads of households (SFHOHs). Although, some SFHOH renters believe they will buy upon their next move, nearly 60% of SFHOH renters surveyed indicate they feel homeownership is out of reach indefinitely.

Freddie Mac's survey confirms this demographic has experienced rising housing cost burdens and reduced confidence in wealth building over the past year, further illustrating how the pandemic's economic fallout has hit the country’s most economically vulnerable populations.

Events over the past two years have disrupted wealth building among SFHOH.

Many women had their work situation disrupted during the pandemic. Among those that dropped out of the workforce, a staggering 75% have not yet returned. Black and Hispanic women more frequently struggle to provide for their household and fear they will not recover financially in the next year — if ever. Generation X and younger respondents also struggle financially and feel stressed about the future. 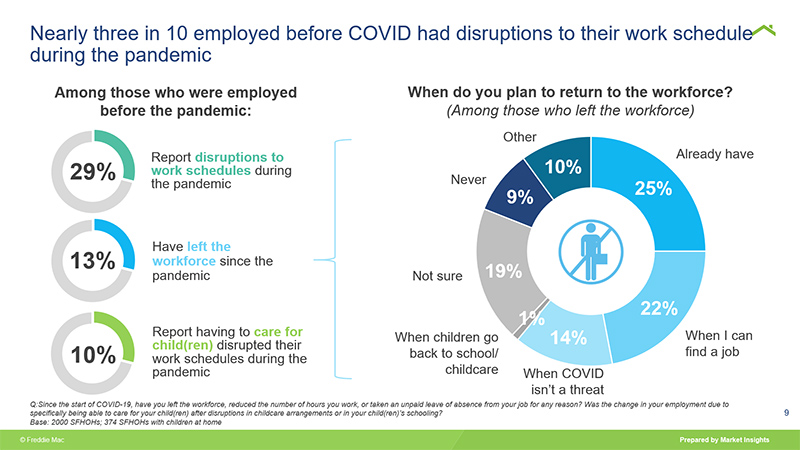 Over half of SFHOH renters are "cost burdened," spending more than 30% of their income on housing, with Black and Hispanic women fairing worse.

The survey responses showed that SFHOH renters who are "cost burdened" are represented similarly across race, with majorities of Black (52%), White (55%) and Hispanic (55%) populations spending more than 30% on rent. However, a closer look found that Hispanic and Black SFHOH renters are more likely to be cost burdened, with 57% of Hispanic and Black respondents, not having enough to cover the basics or living payday to payday; compared to 47% of White SFHOH renters. 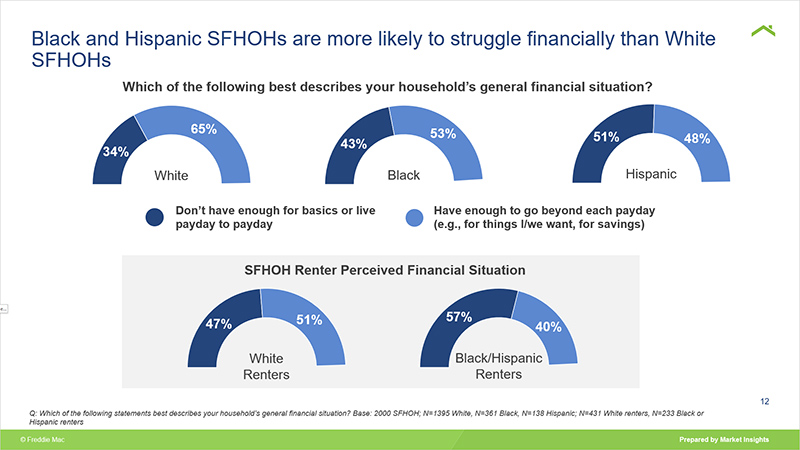 SFHOH renters experience numerous obstacles to owning a home and many don’t think homeownership is an option for them.

Nearly 60% of SFHOH renters do not believe they will ever be able to afford a home. Moreover, 82% say they don’t have enough money for a down payment or closing costs. Roughly 75% also believe a mortgage would be higher than their rent or they don’t earn enough for a mortgage payment. 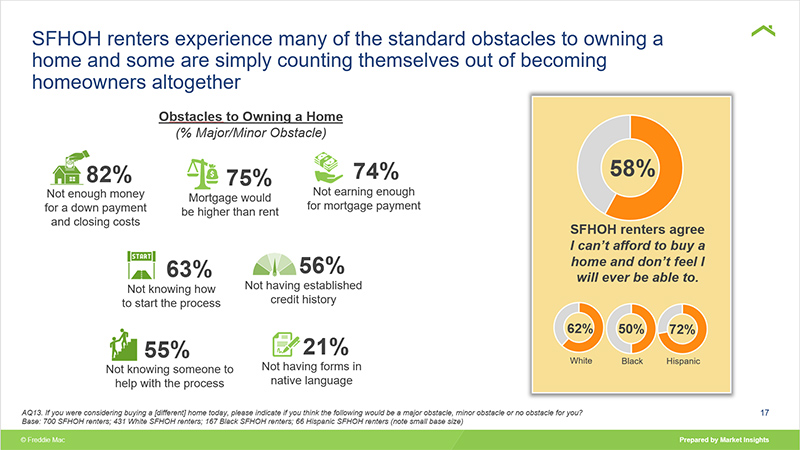 Opinions, estimates, forecasts, and other views contained in this document are those of Freddie Mac’s economists and other researchers, do not necessarily represent the views of Freddie Mac or its management, and should not be construed as indicating Freddie Mac’s business prospects or expected results. Although the authors attempt to provide reliable, useful information, they do not guarantee that the information or other content in this document is accurate, current or suitable for any particular purpose. All content is subject to change without notice. All content is provided on an “as is” basis, with no warranties of any kind whatsoever. Information from this document may be used with proper attribution. Alteration of this document or its content is strictly prohibited. © 2022 by Freddie Mac ©2022 by Freddie Mac.

Majority of Aging Adults Likely to Age in Place