Quarterly Forecast: The Economy is Recovering from a Deep Contraction and Housing is Rebounding, but the Outlook Remains Highly Uncertain

The effect of COVID-19 has been felt around the world and across the United States. As states have begun easing restrictions, the economy is rebounding but continues to be constrained.

Interest rates fell to all-time lows in April and May and remain very low. Recent data has shown the devastating impact of COVID-19 on the labor market, consumer spending, and housing. The Federal Reserve made two emergency rate cuts to a range of 0 to 0.25%, citing the disruptions and economic damage caused by COVID-19.

The Fed is urging bold action going forward, warning that the economic impact from COVID-19 is “without modern precedent.” In April, the unemployment rate spiked to 14.7%, but it declined to 13.3% in May. The improvement was driven by a higher than expected rebound in employment by 2.5 million. While the rebound in employment is undoubtedly good news, employment remains 20 million below February numbers and will take an extended period of time to recover.

Due to the deterioration in the labor market, the wages and salaries component of income fell 8% in April—the largest monthly drop since data collection began in the 1950s. However, due to the CARES Act, the stimulus led to a 90% or $3 trillion increase in government income transfers to consumers. The massive rise in supplemental income to consumers from the stimulus more than offset the decrease in wages and led to an 11% increase in total personal income—the largest monthly increase on record.

Although consumer income rose substantially in April, consumer spending declined 14% and this decrease was broad based across many consumer segments. The combination of a large increase in income growth combined with a large drop in spending led to a spike in the savings rate, which rose to a record 33% in April, up from 12.7% in March. Historically, the savings rate has risen during deep recessions as consumers build up a cushion of precautionary savings. But, the record rise in savings rate reflects both the impact of the shutdown by state and local governments on consumer spending and a behavioral change in consumers in the face of a recession.

Housing market data turned negative in late March and hit a trough in mid-April but has since been rebounding.  As of mid-June, purchase applications rebounded from April’s lows and reached the second highest weekly level of the year, which represents a 12% increase from a year earlier. It is a remarkable rebound from mid-April’s trough when purchase activity was down 30%. After the Great Recession, it took more than 10 years for purchase demand to rebound to normal, but during the COVID crisis, it took less than 10 weeks for demand to bounce back.

Heading into the summer, the housing market is clearly rebounding faster than expected with a recovery in purchase demand and muted home price response due to the economic downturn. However, the future is much more uncertain than usual. It is clear the stimulus has cushioned the economic impact of the pandemic on consumer balance sheets in the short-term. However, despite the stimulus the pandemic has caused a tremendous amount of damage to the labor market and small businesses that is still unfolding. On the housing front, the recovery in purchase demand may reflect deferred sales and perhaps pulled some demand forward as prospective buyers not impacted by the downturn take advantage of the record low rates. There are still great unknowns about the evolution of the recovery and future policy response, so our outlook for the housing market is cautiously optimistic. 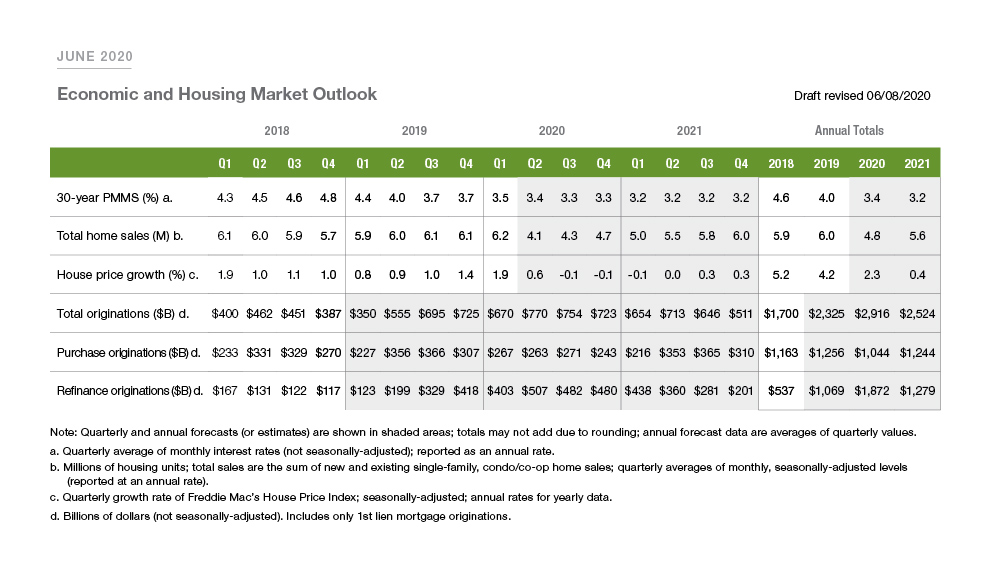