For example, Bankrate and Zillow report weekly average 30-year fixed-rate mortgage rates, and the Federal Housing Finance Agency provides a Monthly Interest Rate Survey (MIRS), which includes annual mortgage interest rate data back to 1963. The various survey measures usually show the same general trend in mortgage rates, but there are differences from week to week, and in some cases, persistent differences in the level of rates reported by various sources.

Because the PMMS is widely covered across the industry and in the media, various stakeholders, as well as consumers, are often interested in understanding why the PMMS rates sometimes differ from other surveys, other reports, or the rates their lender is quoting on the day Freddie Mac releases its survey. Freddie Mac is also interested in understanding why various measures of mortgage rates can differ and ensuring that it maintains the accuracy and reliability of the PMMS.

This Research Note considers differences in the PMMS and the Mortgage Bankers Association’s Weekly Applications Survey (WAS), another widely tracked survey for the mortgage market.

Before getting into the details of the PMMS and WAS, it’s helpful to take a step back and see what makes up the mortgage rates that borrowers pay, especially for the conventional conforming 30-year fixed-rate mortgage, the most popular product in the market today. Most, but not all, conventional conforming 30-year fixed-rate mortgages in the United States end up in a mortgage- backed security. The lenders who originate the mortgage loans and sell them into the secondary market need to cover the costs of origination, servicing, securitization, and funding of the loans, and those costs are passed on to borrowers through the mortgage rate they pay.

Funding costs are determined by market forces in the liquid Mortgage-Backed Securities (MBS) market. Approximately $200 billion in MBS are traded in the market every day. MBS pricing is anchored by Treasury yields, which indicate the cost of borrowing for the least-risky borrower in the market—the U.S. Treasury. Mortgage rates tend to move up or down with Treasury yields. 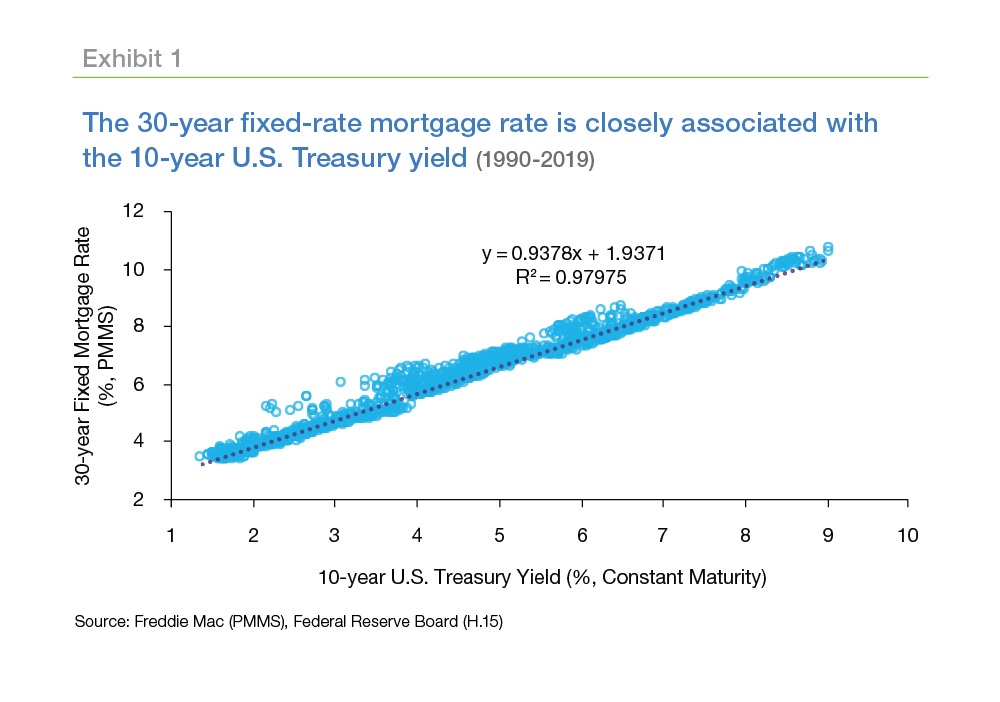 Although there is a positive relationship between the 10-year Treasury yield and the 30-year fixed-rate mortgage rate, these rates do not move in lockstep every week. As a result, the mortgage-Treasury spread, that is, the arithmetic difference in these rates, is not constant. These rates can vary based on shifts in investor opinions on the riskiness of mortgages, imbalances in the supply of Treasuries and mortgages, and fluctuations in our survey results, among other things.1During episodes of market turbulence, such as the 2008 financial crisis, the mortgage-Treasury spread can increase significantly. But, once the turbulence subsides, the spread tends to narrow, and the close correlation between the Treasury yield and mortgage rates returns. As shown in Exhibit 1, 98% of the weekly variation in average 30-year fixed-rate mortgage rates since 1990 can be explained by weekly variations in 10-year Treasury yields.

The Freddie Mac PMMS is a primary market survey, which means it does not use data on loans purchased or funded by Freddie Mac. Instead, Freddie Mac surveys originators across the country and across different types of lending institutions and estimates what a typical consumer might see if they shopped around for mortgage rates. The PMMS sample includes a mix of lender types which is roughly proportional to the level of mortgage business that each type commands nationwide.

The PMMS is focused on conventional, conforming fully-amortizing home purchase loans for borrowers who put 20% down and have excellent credit. From week to week, the composition of borrowers in the market changes, but the PMMS keeps the loan product, loan purpose, and borrower profile constant. By keeping the loan profile constant, the PMMS captures weekly movements in rates excluding composition effects, which allows for easier comparison over time. For example, in periods when mortgage rates decline, the share of refinance loans typically rises. If on average, refinance loans have higher mortgage rates than otherwise similar purchase loans, then the decline in the national average rate would be somewhat offset by a shift toward more refinance loans.

The PMMS also calculates “points” by adding discount points and origination points. A point equals one percent of the loan amount. Discount points are used by consumers to buy down their mortgage interest rate. Therefore, an inverse relationship exists between the number of points paid and the given mortgage rate. Origination points are paid by consumers but are used to cover the costs of originating the mortgage, such as compensation for the loan officer, application processing costs, etc. The points quoted in the PMMS represent the average points charged for mortgages offered at the PMMS rate during the survey week, and they have historically averaged around one point.

The survey is collected from Monday through Wednesday, and the results are released on Thursday at 10 a.m. Eastern Time (ET).

The rates captured in the WAS are the averages of lender reported rates and are not currently weighted to reflect application volumes. Like the PMMS, the WAS reports on points and fees, which include discount points paid by the borrower and origination fees charged by the lender.

Differences between the PMMS and WAS 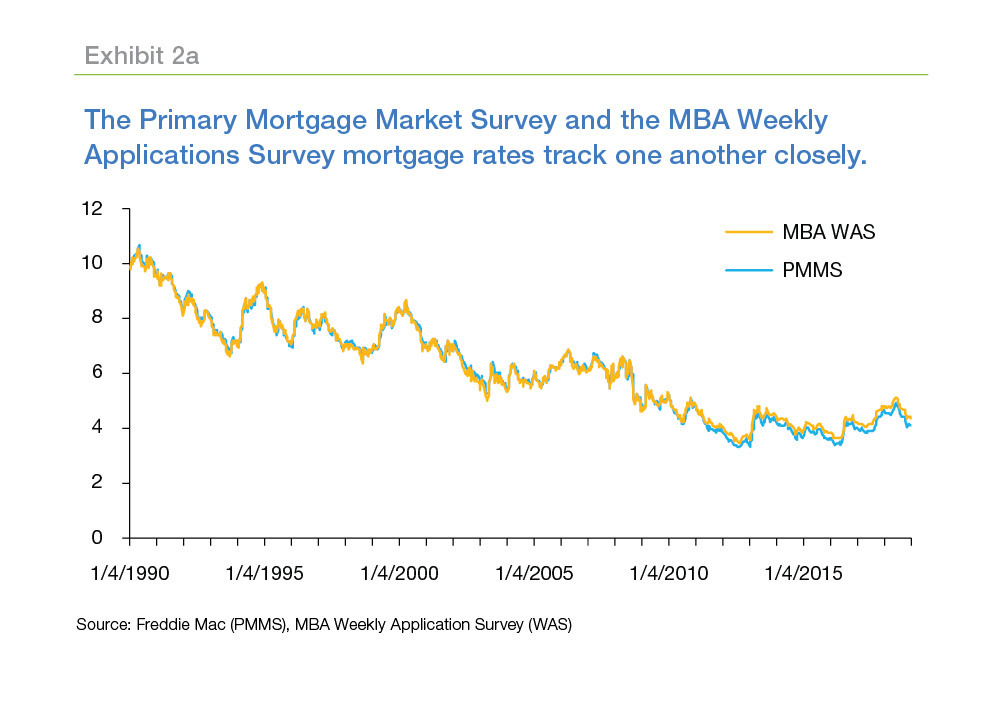 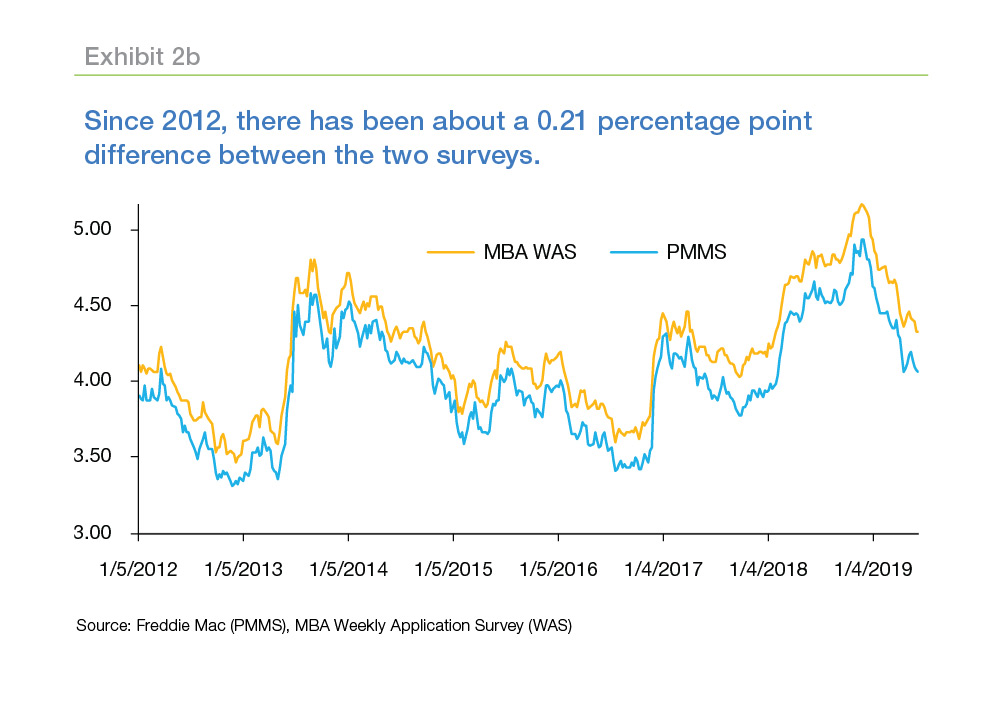 What can explain this divergence?

To analyze the difference between the PMMS and WAS rates, Freddie Mac ran a variety of scenarios using data collected through its Loan Product Advisor underwriting system to replicate a sample of loans similar to the applications tracked in the WAS and constructed a close approximation of the MBA’s average rate. As shown in Exhibit 3, when the sample of applications received through Loan Product Advisor was restricted to 30-year fixed-rate conventional applications, with a loan-to-value (LTV) of less than or equal to 80% and an unpaid principal balance (UPB) greater than or equal to $200,000 in the conforming space, the Loan Product Advisor and WAS rates were almost identical. 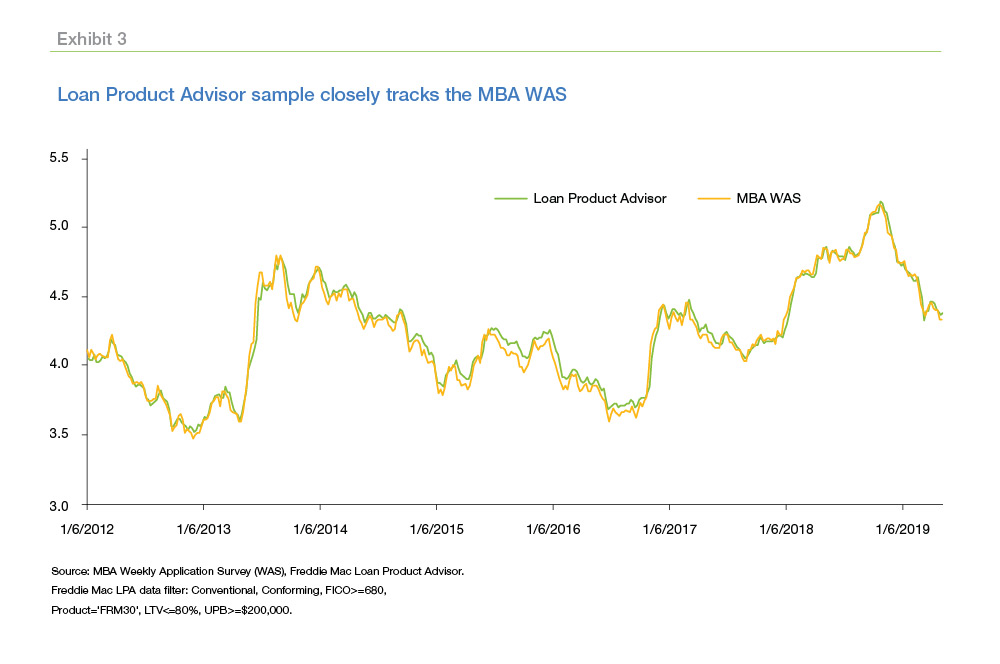 Therefore, understanding the difference between the Loan Product Advisor sample and the PMMS data helps explain why the PMMS and WAS have diverged.

Exhibit 4 displays the differences in the PMMS data and our adjusted Loan Product Advisor sample. 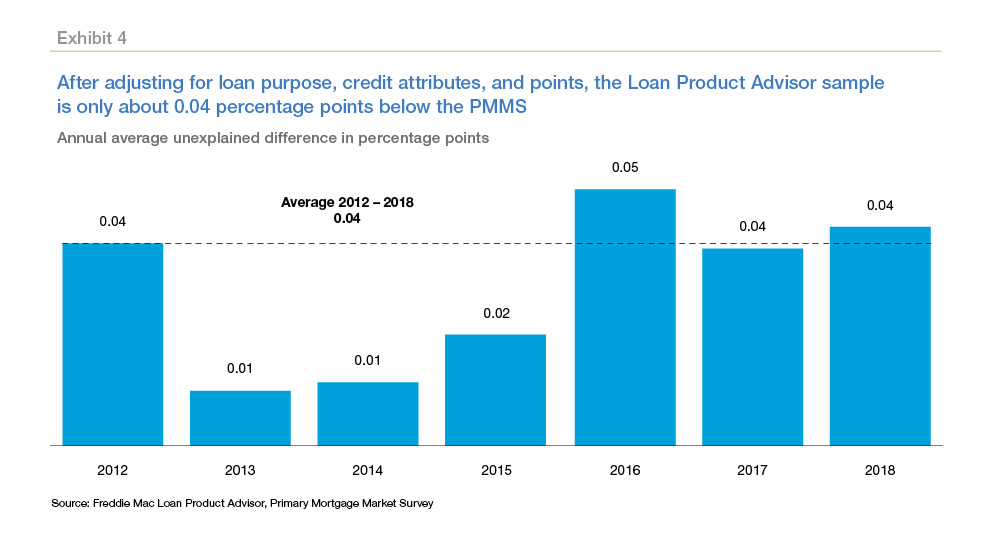 The remaining difference between the PMMS and WAS data remains unexplained but is likely due to sampling variability, differences in coverage including timing, and differential weights on lenders.

For example, with respect to sampling variability, Freddie Mac’s internal analysis suggests that the weekly PMMS has a margin of error of about 0.05% for the 30-year fixed-rate mortgage. With respect to coverage and timing, the PMMS is constructed to reflect originations, while the WAS measures applications, only about 75% of which are covered by the survey and not all of which will become originations (during the same survey period or at all). With respect to weighting, the PMMS is constructed to reflect a composition of mortgage originations weighted in terms of the size and type of lending institution as well as geographic coverage while the WAS is not weighted to reflect application volumes.