This past year was a busy year for the mortgage market. While the economy was in recession, record low mortgage interest rates contributed to refinance activity reaching near record highs. Many borrowers saved thousands of dollars by lowering their mortgage rate through refinances. This Research Note highlights some of the key trends defining refinance mortgage activity in 2020.

Despite an economy rocked by the COVID-19 pandemic, mortgage market activity in 2020 increased. With mortgage rates reaching historical lows in 2020, mortgage refinancing activity reached its highest annual total since 2003. There were an estimated $772 billion in inflation- adjusted 2020 dollars in single-family first lien refinances in the fourth quarter 2020. For full-year 2020, there were about $2.6 trillion in inflation-adjusted refinance originations, more than double the volume in the prior year, but still less than the $3.9 trillion in 2003.1

According to Freddie Mac’s Primary Market Mortgage Survey, the 30-year fixed rate mortgage rate averaged 3.1% in 2020, a decline of about 90 basis points from a year earlier. Also, in 2020 house prices rose 11.6% on a year-over-year basis. Homeowners took advantage of record low mortgage rates and increased homeowner equity to refinance their properties, reducing their monthly payments and extracting equity through cash-out refinances.

With mortgage interest rates falling rapidly throughout the year, we saw an increase in repeat refinances. Repeat refinances include loans that were refinanced two or more times within a 12-month period. In 2020, 10.1% of refinances were repeat refinances, up from 7.8% in 2019, but less than the 16.6% in 2003. 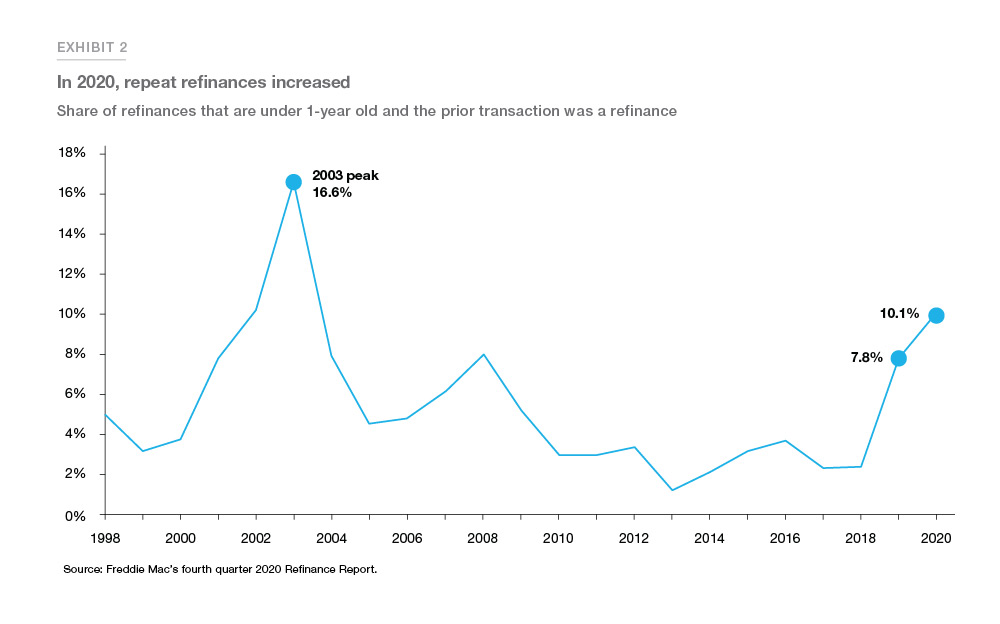 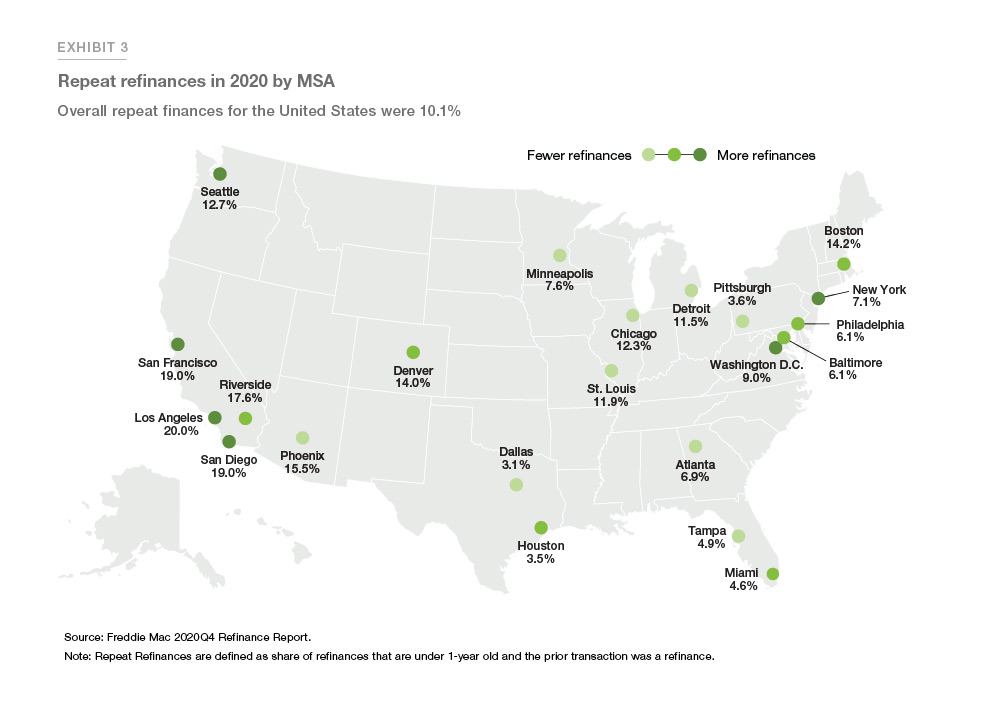 On average, borrowers who refinanced their first lien mortgage in the fourth quarter of 2020 lowered their rate by more than 1.25 percentage points, the largest reduction since the second quarter of 2015. A year earlier, refinance borrowers lowered their rate by about 0.70 percentage points, on average. Exhibit 4 compares the average mortgage rate of the old refinanced loan against the average mortgage rate of the new refinance loans for each quarter from 1994 through 2020. 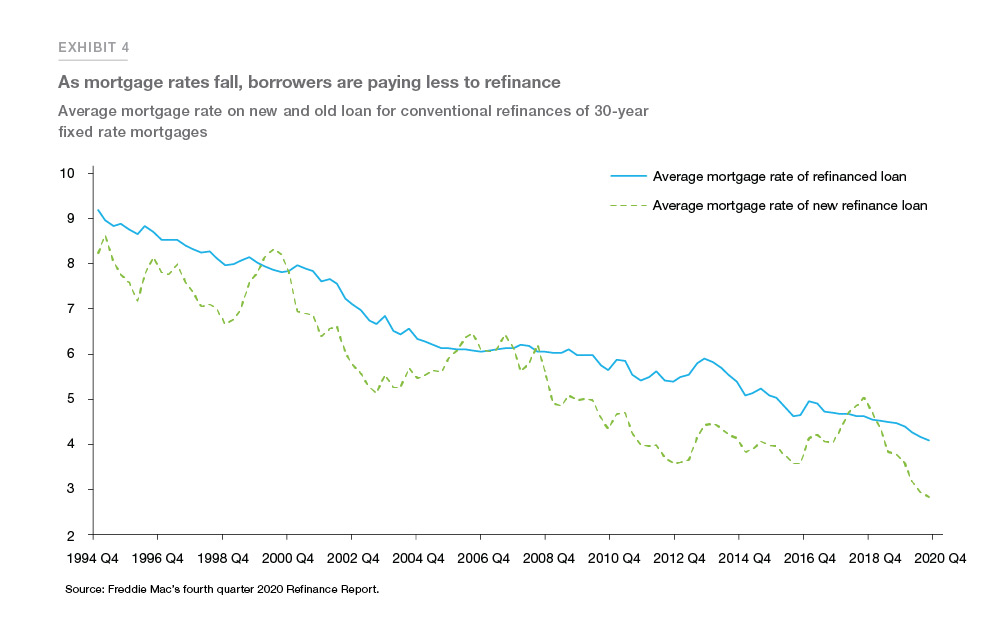 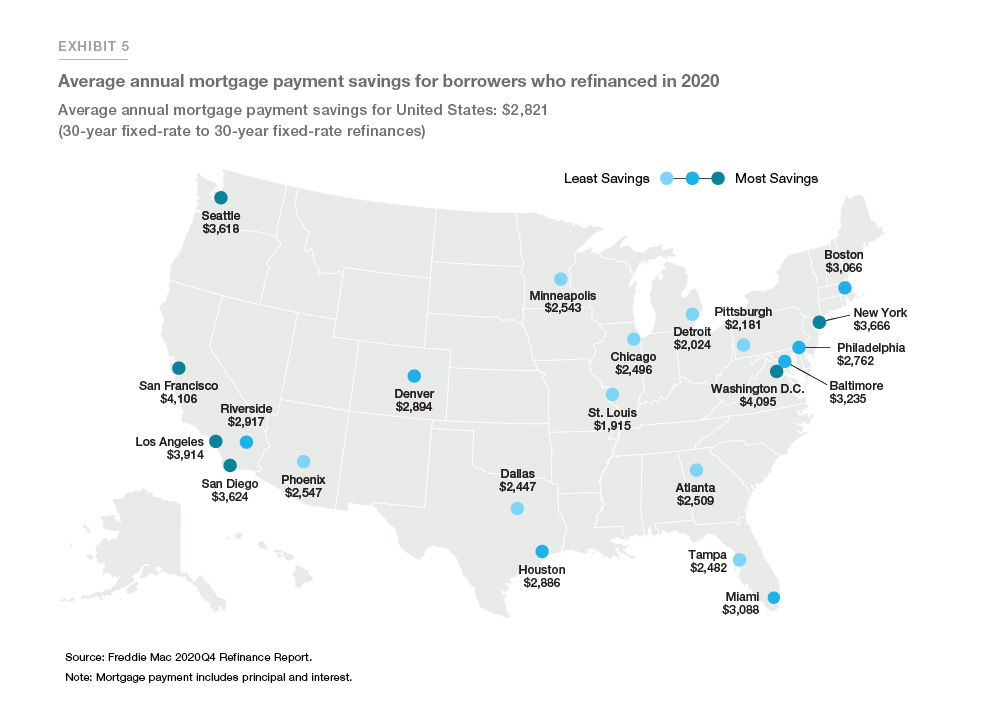 About one-fourth of refinance borrowers shortened their term

Of borrowers who refinanced in the first quarter of 2020, about 24% shortened their loan term, down from 28% in the prior quarter (see Exhibit 6). The difference between the 30-year and 15-year fixed rate loans averaged 0.52 percentage points. Borrowers tend to refinance into shorter term products when the mortgage rate difference between the longer and shorter-term products is larger. For example, in the first quarter of 2014, the difference between the 30-year and 15-year loan products was 0.96 percentage points—resulting in more than 37% of borrowers shortening their loan term. In terms of product distribution, more than 98% of refinancing borrowers chose a fixed-rate loan. Fixed-rate loans were preferred regardless of what the original loan product had been. 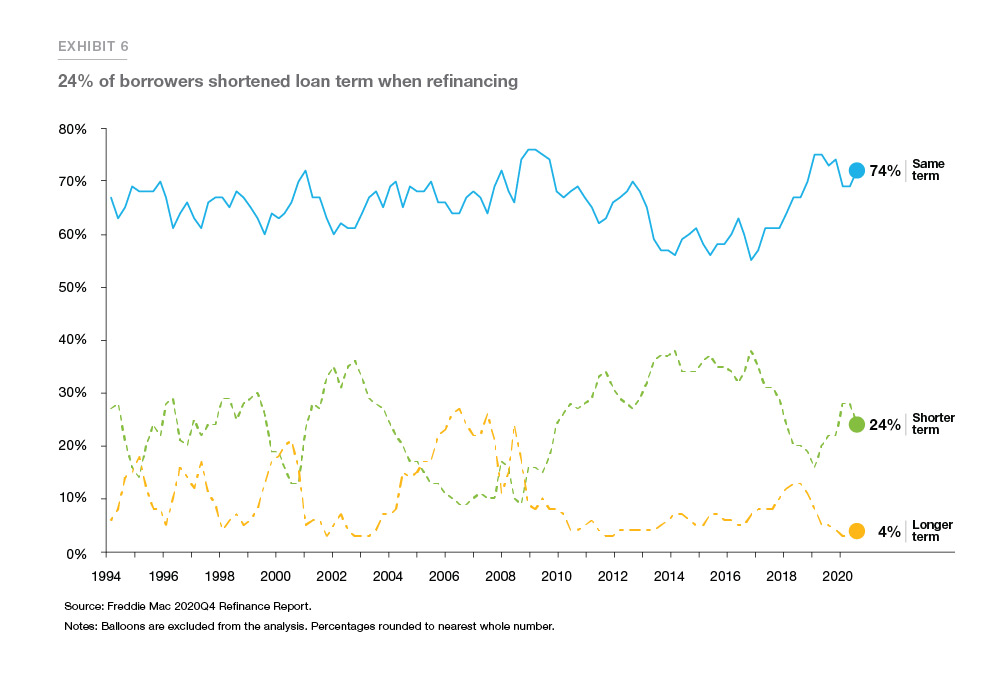 Homeowners are cashing out more

Based on Freddie Mac's Quarterly Refinance Statistics, "cash-out" borrowers, those that increased their loan balance by at least 5 percent, represented 38% of all refinance loans in the fourth quarter of 2020; an increase from the previous quarter, but much lower than the 89% share reached during the third quarter of 2006. The total cash-out volume increased to $48.4 billion but was lower than the volumes reached during the early 2000s housing boom. Adjusted for inflation in 2020 dollars, in the fourth quarter of 2020 an estimated $48.0 billion in net home equity was cashed out during the refinance of conventional prime-credit home mortgages, up from the $34.3 billion a year earlier and substantially less than the peak cash-out refinance volume of $108.1 billion during the second quarter of 2006 (see Exhibit 7). 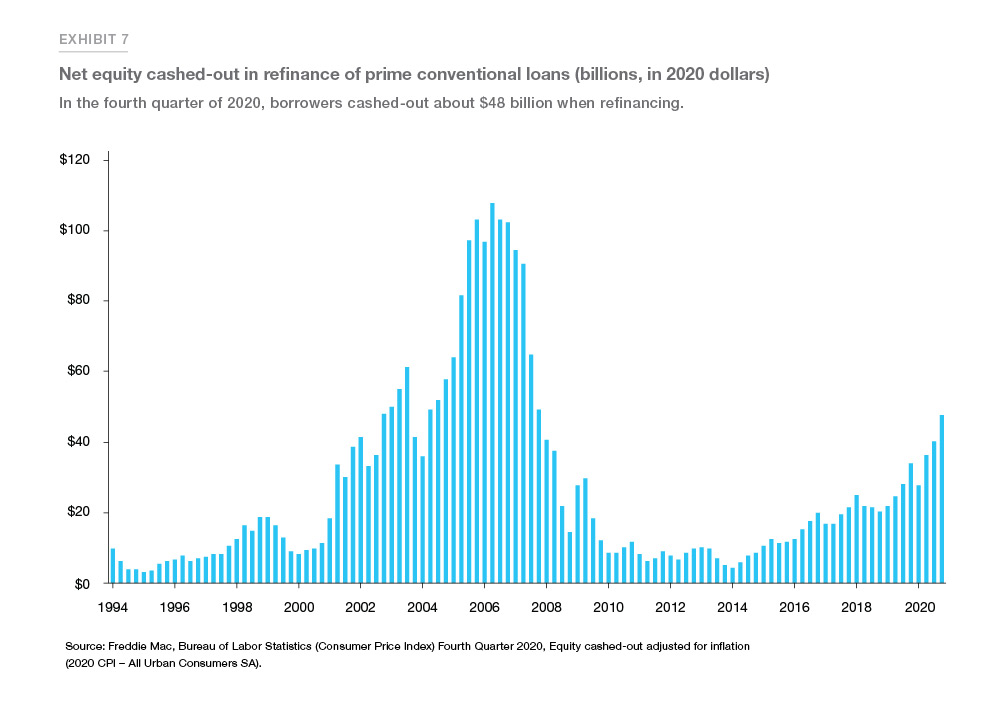 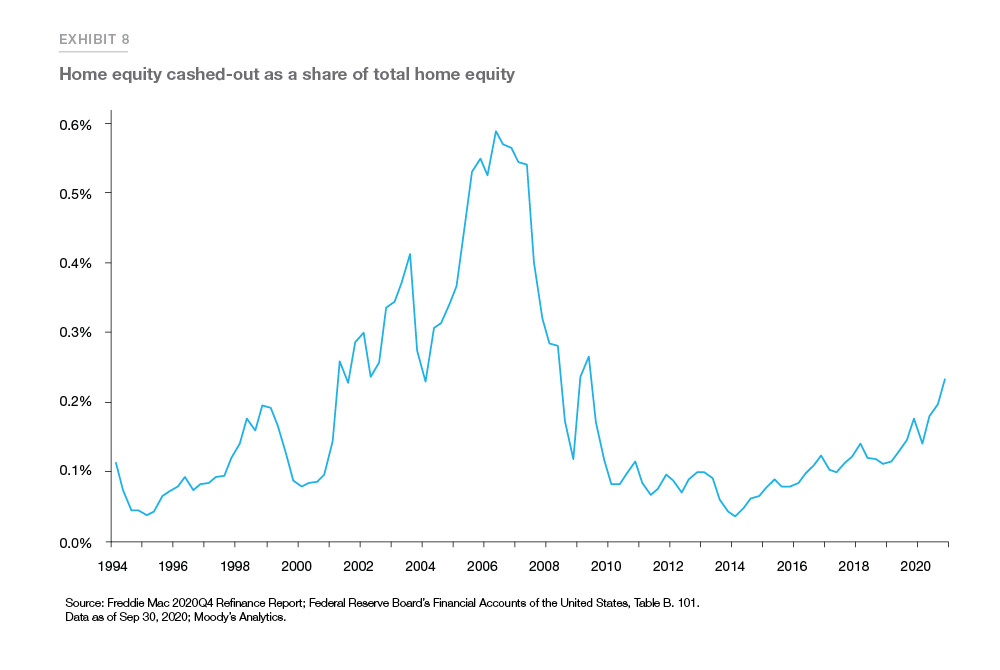 When borrowers get a mortgage loan, they have the option to pay discount points and buy down their interest rate. By paying discount points—expressed as a percentage of the loan amount; i.e. 1 point for a $300,000 would be $3,000—borrowers can lower the rate on their mortgage. The amount of points paid by a borrower can be combined with the contract rate on the mortgage to calculate an effective rate on the mortgage. Typically, analysts assume that one point paid upfront translates to 0.2 percentage points in interest rate, though the borrower’s own translation between rate and points could be different depending on factors such as how much the borrower discounts future cash flows. 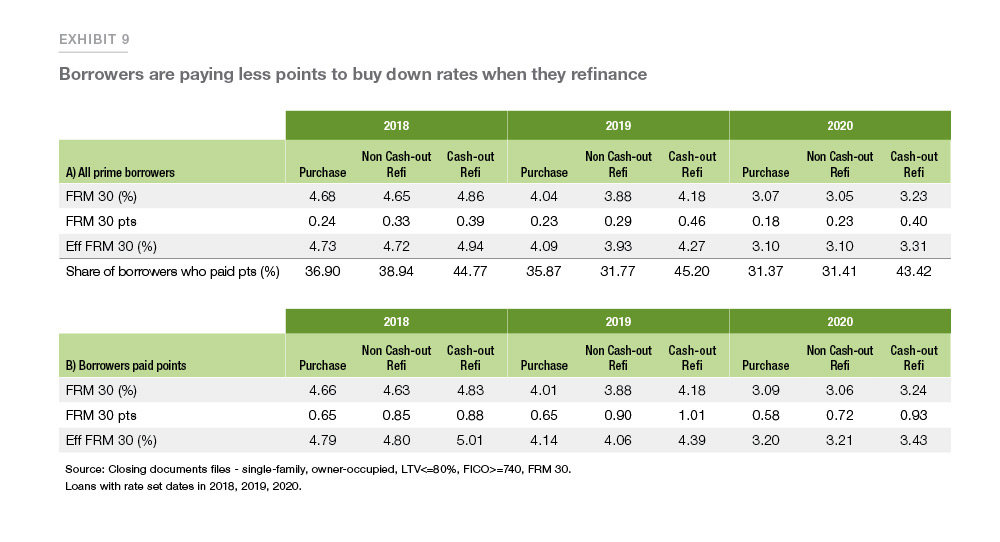 Who saved from refinancing in 2020?

With mortgage rates reaching multiple record lows in 2020, refinance borrowers locked in thousands of dollars in savings on average by refinancing, sometimes more than once. Some homeowners also took advantage of the opportunity to tap equity through cash-out refinancing, while others sped up the rate at which they paid down their principal by refinancing into a shorter term. With mortgage rates still near a record low, we forecast that refinance volume will remain strong in 2021. Though there are still many homeowners who could benefit from refinancing their properties, without an unexpected drop in mortgage rates, the volume of refinances will likely contract this year relative to the near-record setting levels we saw last year.