In a recent "Perspectives" piece about the housing supply shortage, Freddie Mac's Chief Economist, Sam Khater highlighted the growing deficit that the industry has been facing, not only during the pandemic but even before the pandemic hit. In 2018, we estimated the housing shortage to be 2.5 million units.1 In this Note we provide an updated estimate for the national housing supply shortage with data through 2020 and delve into the reasons for the severe deficit.

Our analysis estimates the housing shortage not only based on the actual number of households but also considers the latent demand and the number of vacant units. A well-functioning housing market requires some vacant properties for sale and for rent.

Exhibit 1 shows the updated target housing stock numbers. As of the fourth quarter of 2020, the U.S. had a housing supply deficit of 3.8 million units. These 3.8 million units are needed to not only meet the demand from the growing number of households but also to maintain a target vacancy rate of 13%. Between 2018 and 2020, the housing stock deficit increased by approximately 52% (See Appendix 1 for detailed calculations of the Housing Supply Deficit). 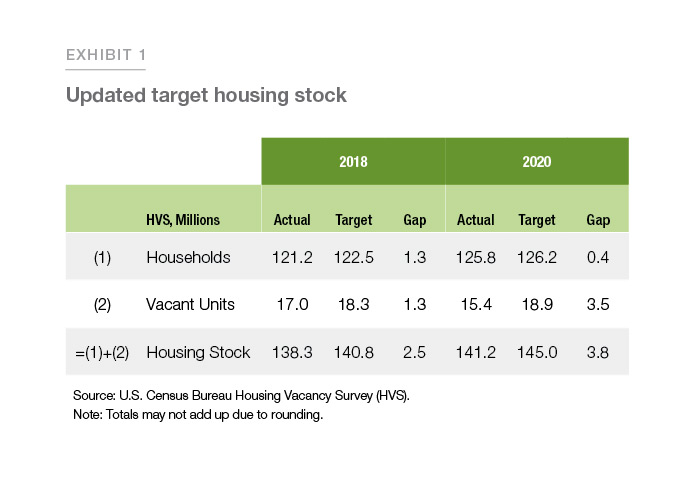 The evolution of the housing supply shortage

For years, tight housing supply has been the sore spot for an otherwise healthy housing market. Inventory of both new and existing homes for sale is currently at a historical low. There are various reasons why housing supply has not been able to keep up with the rising household demand. A few of the most often cited reasons for housing shortages are the lack of available construction labor (81% of the construction firms surveyed by Associated General Contractors of America in 2020 cited this issue2), land use regulations, zoning restrictions preventing supply from picking up in areas which have the most demand, NIMBYism (not in my back yard), lack of land developers and land to develop.

In recent years, increasing raw material costs have also been adding to builders' woes, especially during the pandemic when lumber prices increased more than 150%. But one of the most important reasons for this shortfall has been the severe underbuilding of entry-level homes, where most of the demand exists, especially now given the large cohort of Millennials entering the housing market. Given the significant impact of this factor, we discuss the entry-level shortage in some detail below. 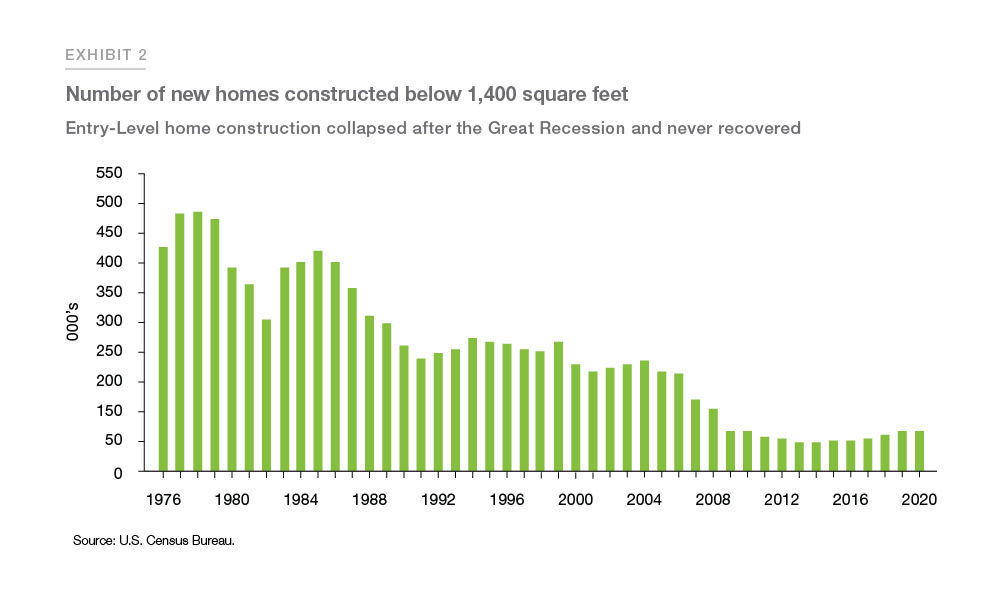 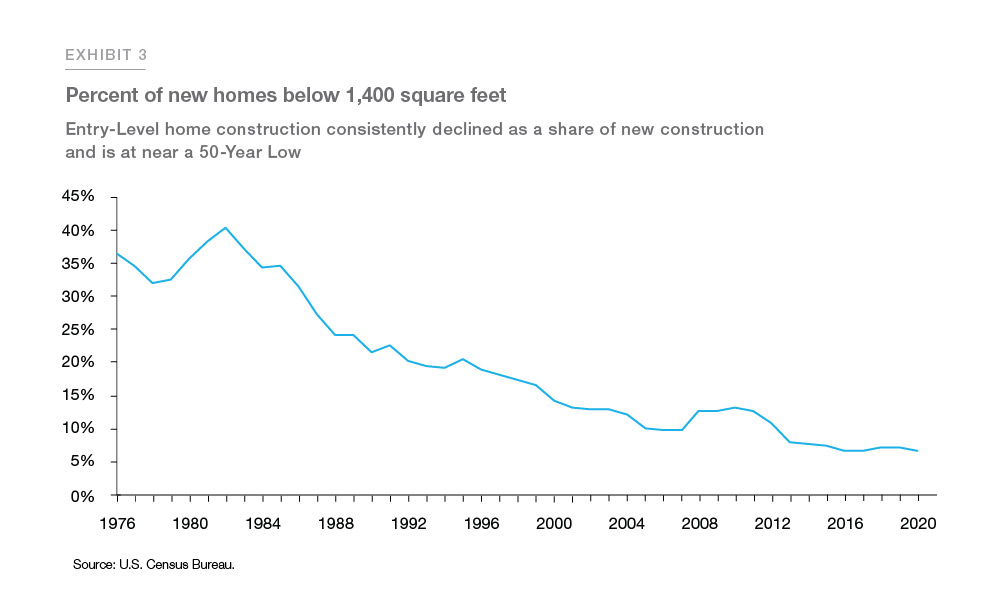 However, the decade long average for construction of single-family homes masked a troubling trend. In the second half of the 1980s, the share of new entry-level supply decreased from 40% of our nation's new single-family housing units in 1982 to 24% by 1989, a large decline that continues to today.

The 2000s saw a substantial rise in new housing supply in reaction to new mortgage rate lows and new subprime and Alt-A products that led to record home purchase demand by the middle of the decade. As a result, new single-family housing supply rose to 1.7 million in 2006 – the highest construction level in sixty years. Despite the record increase and level of new single-family housing supply, entry-level supply continued its downward trajectory. During the 2000s, new entry-level housing supply averaged 150,000 units per year, compared to 207,000 during the 1990s. Even at its cyclical peak during the 2000s, entry-level supply reached only 186,000 units in 2004, the same year that homeownership peaked during this period. This trend is indicative of the impact of entry-level housing supply on homeownership, which is well below the peaks of prior expansions.

The ongoing housing shortage is large and rising, in part due to the effects of the COVID-19 pandemic. Our estimates suggest that the shortage has increased 52% from 2.5 million in 2018 to 3.8 million in 2020. And given the low mortgage interest rate environment, the high demand and the need for more space, we expect this shortage to continue into the near future. In fact, the decline in entry-level supply is even more pronounced than the overall shortage. The share of entry-level homes in overall construction declined from 40% in the early 1980s to around 7% in 2019.

The U.S. is currently experiencing an increase in housing demand that is well beyond what record low mortgage rates would typically yield as many people are spending more time at home. This high demand has driven the housing supply shortage even higher and has also caused home prices to rise over 12% from a year ago. We do not expect housing demand to decrease in the near-term, especially given the demographic tailwind. For example, Millennials at a population of 72 million, are now the largest demographic in the U.S., and they are at their peak first-time homebuying age – the age where homeownership soars the most. This can be seen in Exhibit 4a, which indicates the percentage point change in homeownership by age group. The exhibit indicates that the largest change in the homeownership rate is for those under 25 years of age to those between 25 to 29 years of age. This change is also reflected in the increase in the homeownership rate of the 25-34 year olds, which has been increasing since 2016 after recovering from the impact of the Great Recession of 2008-09 (Exhibit 4b). Given the large young adult cohorts entering the housing market, the demand for entry-level single-family homes should remain high for the rest of the decade. 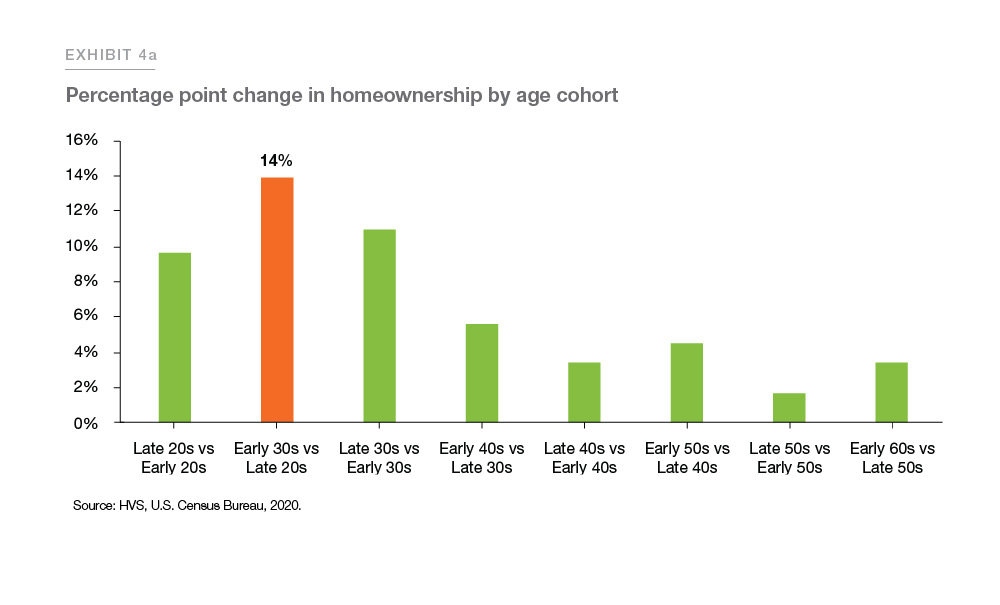 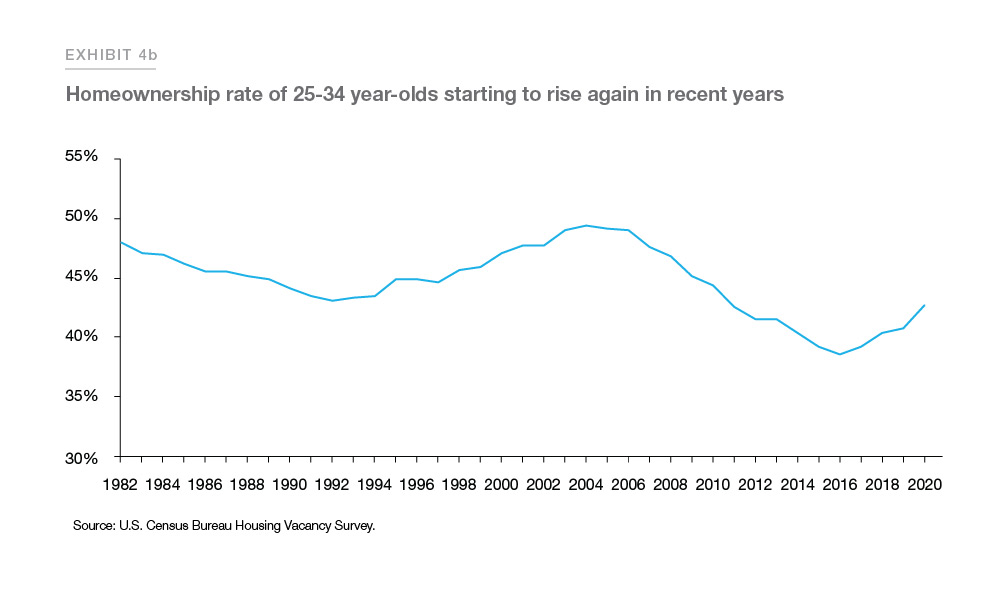 The calculation in Exhibit 1 is based on the following data sources and assumptions.

2 See "How to Adapt to the Skilled Labor Shortage in Construction" (https://www.propelleraero.com/blog/how-to-adapt-to-the-skilled-labor-shortage-in-construction/)

3 See "See two Freddie Mac Insights on the topic: The Housing Supply Shortage: State of the States" (http://www.freddiemac.com/research/insight/20200227-the-housing-supply-shortage.page) and The Major Challenge of U.S. Housing Supply