The COVID-19 pandemic has increased interest in homeowner mobility. There has been a growing trend of moving away from urban areas as housing preferences have shifted towards larger homes that are more conducive to remote work and virtual learning. As a result, more and more people are moving to suburbs and rural towns. One would assume that this trend was the product of pandemic, but our research shows that it was not. The movement away from urban areas began well before any of us heard of the phrase ‘COVID-19.’ Moreover, that movement is to rural areas within metro areas, suggesting that while people may be leaving cities, they are not necessarily moving far from the advantages that cities offer.

To identify the movement of people and where they are purchasing homes, we combine the Home Mortgage Disclosure Act (HMDA) data, which provides detailed loan-level information with the Urbanization Perceptions Small Area Index (UPSAI) from the U.S. Department of Housing and Urban Development (HUD).1 There are various methods used to classify areas into urban and rural (ranging from classifying metro areas as urban and non-metro areas as rural to using the urban rural classification from the census). We rely on the UPSAI classification of census tracts, because unlike other classifications, it includes how residents perceive their neighborhood (see Appendix). According to the UPSAI classification, 52% of the census tracts are perceived as suburban, 27% as urban, and 21% as rural.

Where are people buying homes?

To understand the trend of where home purchases are being made, we compare HMDA data from 2010 through 2019 (the latest year for which HMDA data is available). We find that there has been a notable decline in the share of home purchases in urban areas between 2010 and 2019 and most of the increase (as a percent) is taking place in the rural areas (Exhibit 1a). The share of single-family, owner-occupied home purchase loans in urban areas declined from 22% in 2010 to 17% in 2019. Home purchase loans in suburban areas have remained approximately the same, at around 62% while those in rural areas increased from 17% to 21%.

Digging deeper, we find that home purchases in rural areas outpaced urban areas over the last ten years and were higher than suburban purchases since 2013 (Exhibit 1b). Zooming in on this period from 2013, we find that rural growth was faster than urban and suburban growth.

To better understand what is driving this trend of moving away from urban areas to rural areas, we examine some of the attributes of urban, suburban and rural homebuyers and analyze the changes that took place over the last 10 years. 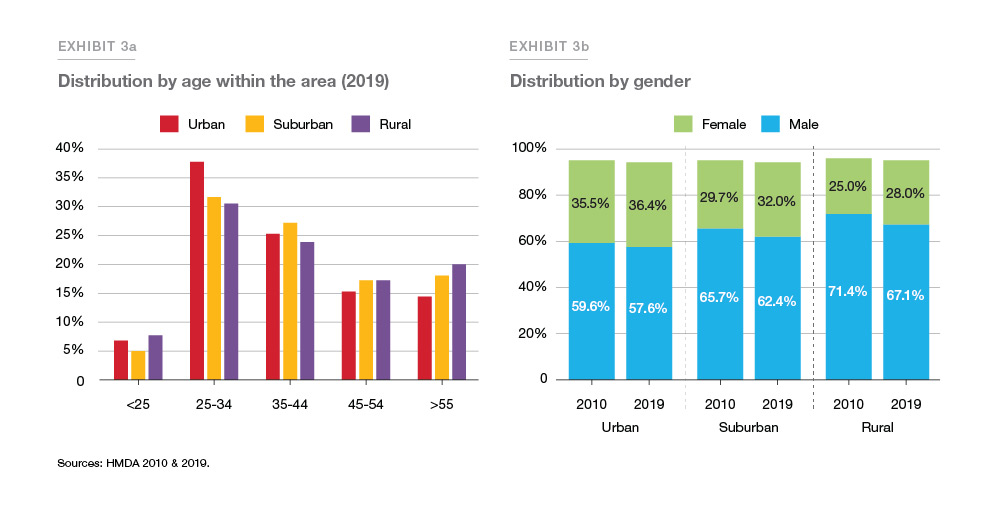 The U.S. is becoming more and more diverse, and these trends are reflected in home purchases in all areas, though rural areas are the least diverse among the three areas we examined. The share of Non-Hispanic White borrowers is largest in rural areas. Specifically, in 2019, the share of home purchases by Non-Hispanic Whites was highest in rural areas at 75%, followed by 59% in suburban areas and 51% in urban areas. The share of Hispanic homebuyers has increased in all three areas between 2010 and 2019. 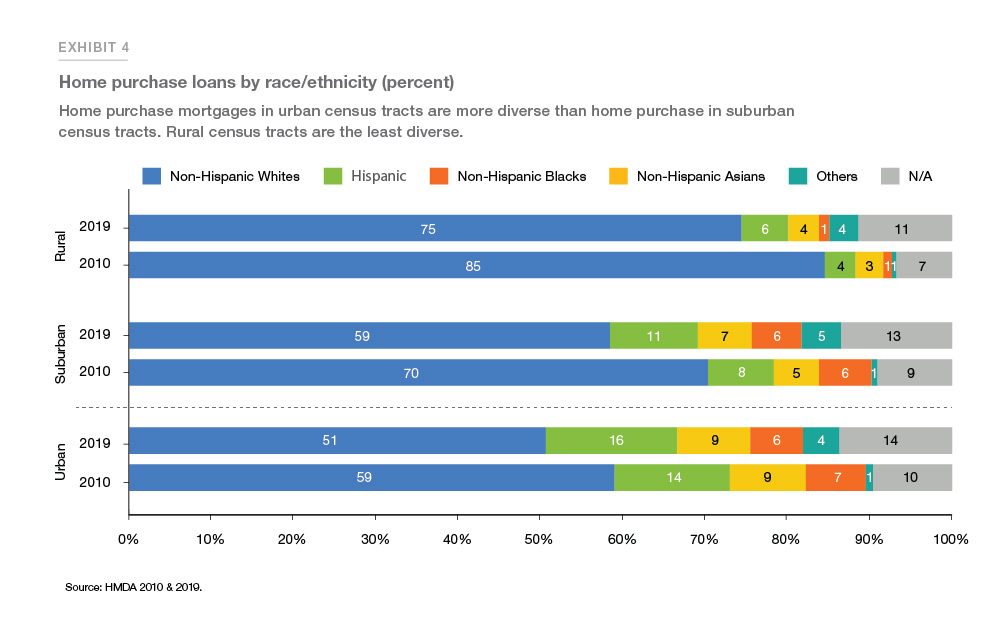 With respect to credit attributes, we look at the LTV and DTI of the borrowers that purchased homes in 2019 in urban, suburban and rural areas. We chose the standard threshold of LTV>80 and DTI>43 to see what share of borrowers fall under these characteristics.5 We find that the share of homebuyers with greater than LTV>80 is higher in rural areas at 71.3% followed by 67.9% in urban areas and 66.2% in suburban areas. In terms of DTI, the share of loans with DTI > 43 is highest in the suburbs and lowest in the rural areas. This could be happening because the property values in rural areas are lower than in urban and suburban areas so their debt to income ratio is also lower (Exhibit 5).

Incomes and loan amounts increased the most in urban areas between 2010 and 2019 (Exhibits 6a, 6b). Loan amounts are lowest in rural areas as compared to urban and suburban areas (Exhibit 6c).

Our analysis of 2010 and 2019 HMDA data also highlighted an increasing shift towards conventional loans in all three areas. On the other hand, the share of Federal Housing Administration (FHA) loans declined in all three areas. In 2010, when the country was just emerging out of the financial crisis, more borrowers relied on FHA loans given tight credit conditions. Slowly, there has been a movement away from FHA loans towards conventional loans. In fact, the share of conventional loans increased from 2010 to 2019 for all three categories. The share of Farm Service Agency (FSA)/Rural Housing Service (RHS) and Veterans Affairs (VA) loans is highest in rural areas. With respect to their shares the share of FHA/FSA/RHS loans have declined while the share of VA loans increased between 2010 and 2019.

Understanding the characteristics of borrowers in urban, suburban and rural areas helps Freddie Mac serve these areas better while working to achieve our goal of making home possible.

Jed Kolko et al use the data collected in the 2017 AHS on the question of 'how you perceive your neighborhood'. They use this data to build a model which identifies the characteristics of each of these areas defined as urban, suburban and rural. They identify 21 attributes which define the regional and neighborhood characteristics. These attributes range from population and housing density to employment and business density and some structural attributes as well along with demographic attributes. They find that the density is usually 100 times more in urban than in rural areas. (Exhibit A1.1) They then apply these characteristics to the ACS census tracts to define them as urban/suburban/rural. 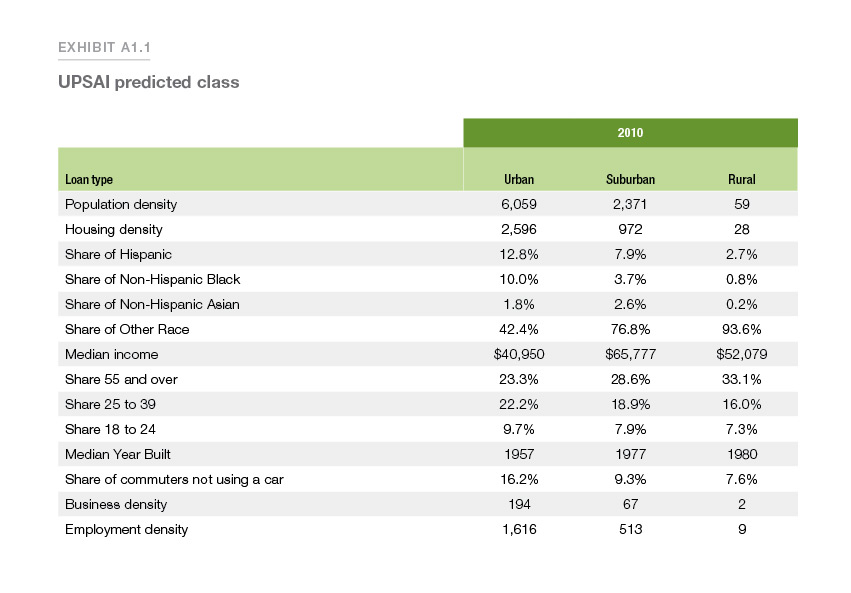 4 Our analysis focused on 2019 because HMDA started reporting borrower age in 2018.

5 For conventional conforming loans, LTV > 80 requires the purchase of a private mortgage insurance (PMI). Therefore, we use this cut off of 80% LTV, which excludes non-QM loans.