After housing's best year in a decade, what's next?

The year is drawing to a close and it is time to take stock of where housing and mortgage markets have been and where they likely are headed.

Though there are a few weeks left, 2016 will by many measures end up being the best year for housing in a decade. Home sales through October are the highest since 2007 and construction as measured by housing starts has reached the fastest pace since 2008. Home prices, not adjusted for inflation, are at record highs erasing the losses experienced during the downturn.1

The picture is mixed for next year. Economic growth appears to be accelerating in the latter half of 2016 and the labor market remains at full employment, but rising interest rates threaten to slow and possibly turn back housing's momentum. As we indicated last month, we think housing will stall a bit in 2017 as higher rates reduce home sales, curb the pace of growth in housing starts, and slow house price growth.

But the fundamentals favor improvement in housing markets. Population and income growth should support housing demand going forward. We anticipate that, after housing absorbs the shock of higher interest rates over time, it resumes on its upward path, and 2018 ends up being a strong year for housing markets despite forecasted increases in mortgage rates. 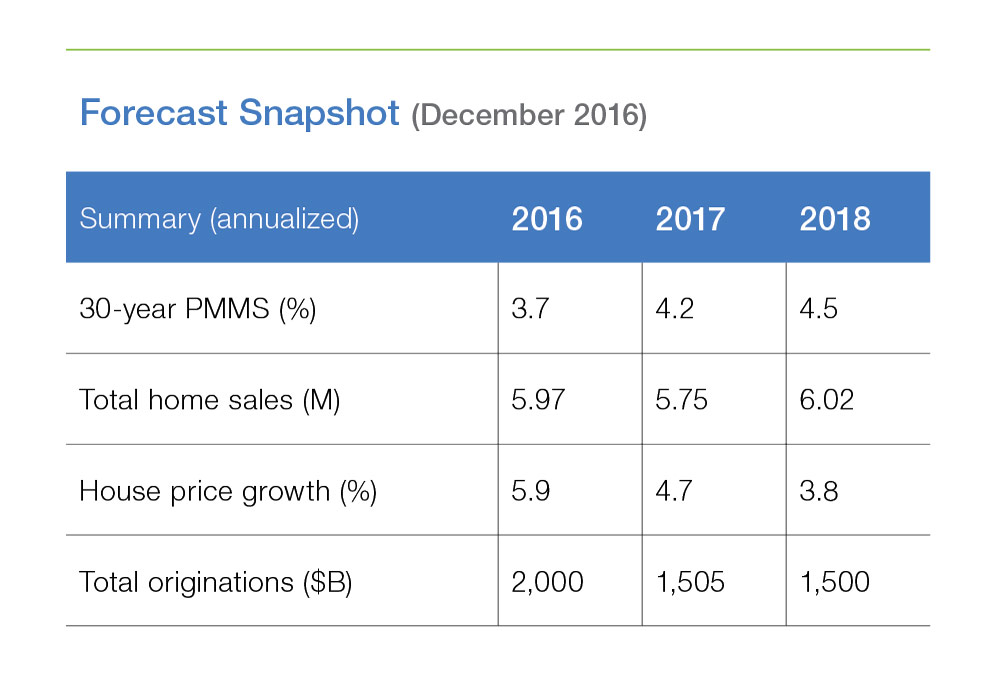 2016 year in review: Housing's best year in a decade

The biggest economic surprise for 2016 was the decline in interest rates throughout most of the year. In December of 2015, the Federal Reserve Open Market Committee (FOMC) raised the federal funds rate for the first time since 2006 and most analysts expected to see more increases in 2016. However, concerns about overseas economic growth, particularly in Europe, contributed to declines in mortgage rates to start the year and they continued to drift down through early summer. But the late June Brexit vote roiled markets, sending the 10-year Treasury to its lowest-ever yield and pushing 30-year fixed mortgage rates below 3.5 percent. Rates remained low throughout the rest of the summer and into early fall. At the beginning of September, rates drifted upward until they stood at 3.54 percent on the Tuesday before the U.S. election. Interest rates rose substantially following the election, increasing by more than 0.5 percentage points in just a few weeks. Rates rose above where they started the year, and as of early December, they are the highest they've been since October of 2014.

The decline in mortgage interest rates early in the year helped to support housing markets. Given the strength in the labor market and pent up demand, we forecasted housing would have performed well even with modestly higher interest rates. The surprising decrease in rates help to spur housing activity to the highest levels we have seen in a decade. Existing home sales through October are the highest level of any year since 2006.

Yet despite low mortgage rates and strong demand, new home construction did not pick up as fast as we had forecasted last year. The lack of available skilled labor appears to be constraining home building activity. For much of 2016 housing starts remained essentially unchanged from the year prior and well below long-run averages. The lack of new home construction is contributing to supply-constrained markets and making it difficult for prospective buyers to find a home.

Rising home values are helping to improve the equity position of American households. The value of the housing stock has improved substantially since 2011, while mortgage debt outstanding has declined resulting in higher home equity. Total housing equity stood at $13 trillion at the end of the third quarter of 2016, up $7 trillion from its low in the first quarter of 2009. The improved equity position of American households leaves them primed to expand borrowing in coming years.

Not only has mortgage debt outstanding remained low relative to the value of the housing stock, but many households took advantage of near historic low interest rates to refinance in 2016. Over the last year ending in September 2016, Freddie Mac helped nearly 823,000 families refinance, saving them on average $2,400 in interest payments in the first year. Our latest forecast has $1 trillion in single-family mortgage refinance originations in 2016, the highest total since 2012. Borrowers also are starting to take advantage of their increased equity through cash-out refinances. We estimate that borrowers cashed out approximately $42 billion in the first three quarters of 2016, up $10 billion over the same period in 2015.

In this month's outlook, we extend our forecast to include 2018. Over the next two years, we anticipate that economy will keep growing at a modest pace, inflation will pick up and the labor market will stay at full employment. Interest rates will gradually rise as the Federal Reserve continues on its path of policy normalization. Housing markets will slow a bit in 2017 (see last month's Outlook for more analysis), but they will recover after they absorb the initial shock of higher interest rates.

1 Though with significant variation across states. As of September 2016, about 6 percent of homeowners with a mortgage are underwater per CoreLogic.