Twenty-somethings Dan and Susan dream of buying a house. Their rent keeps going up, and they want a place to call their own. But saving for a down payment is tough, especially with the price of houses in their area going up every year.

For Dan and Susan, and hundreds of thousands of young adults like them (ages 25-34), rising housing costs are deferring their American Dream. While rising home prices may be good for homeowners, they are pushing homeownership further into the future for many potential buyers. Higher home prices weaken affordability, and first-time home buyers are particularly impacted because prices have increased most for the lower-priced homes they would typically buy.

Young adults comprise a large share of first-time home buyers, and they have largely been excluded from the benefits of the rapidly rising home values of recent years. Unable to buy, many young adults have continued to rent, and rising rents have made it more difficult to save for a down payment. Conversely, some young households prefer the flexibility and convenience renting can offer and currently have no plans to buy a home.

Homeownership rates for young adult households have declined 8 percentage points from their 2004 peak (Exhibit 1). Although the rate has ticked up modestly in recent quarters, the overall level remains about 3 percentage points below the historical average. 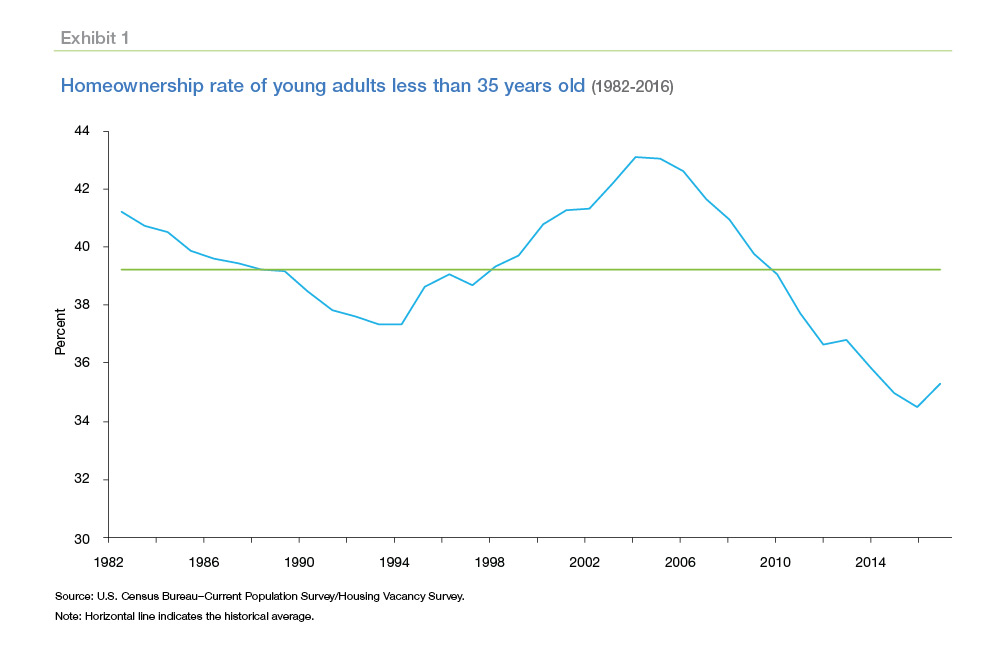 Higher housing costs are the main factor explaining the drop in young adult homeownership rates. We find that they explain about half of the decline. Changes in sociological factors such as declining marriage and fertility rates explain much of the rest.

In a pessimistic scenario, the homeownership rate of young adults only increases to 55.9 percent by 2025 – 2.2 percentage points less than baseline.

The overall level of homeownership for young adults, adults between the ages of 25 and 34, remains about 3 percentage points below the historical average.

What accounts for the young adult homeownership gap?

Extensive literature studies the determinants of and obstacles to young adult homeownership, with many papers emphasizing the importance of socioeconomic and demographic characteristics (see Appendix A.1 for a summary of studies on homeownership by young adults). The consensus is that changes in life-cycle trajectory and economic conditions influence the choice to rent or buy. Our research refines prior studies by focusing on the role housing costs play in young adult homeownership.

Similar to our previous research on Young Adult Household Formation, we built a statistical model to estimate the relationship of homeownership to a variety of economic and demographic factorsusing 2016 ACS data.1 The main results are summarized below. Full details of the model can be found in Appendix A.5.

Main results of our model

Conversely, higher housing costs decrease the likelihood of homeownership. For example, our model shows that a one percent increase in the average price of a home decreased the likelihood of homeownership for young adults by 11 percent in 2016. And where that home is located matters a lot. Young adults living in metro areas – where employment opportunities and amenities abound—are 5 percent less likely to become homeowners compared to young adults living outside metro areas.

High housing costs account for about half of the gap in the homeownership rate between young adults in 2000 and 2016, and this significant role is likely to continue.

1 We used household-level records from the U.S. Census Bureau’s 1-in-100 national random sample of the population from the Decennial Census (for the year 2000) and the American Community Survey (for 2016), made available through the Integrated Public Use Microdata Series (IPUMS). We included a variety of demographic and economic controls to model historical trends in young adult homeownership and to simulate future scenarios.

2 Census Bureau defines multigenerational households as those containing three or more generations, and we used the same definition in our analysis.

What factors matter most? 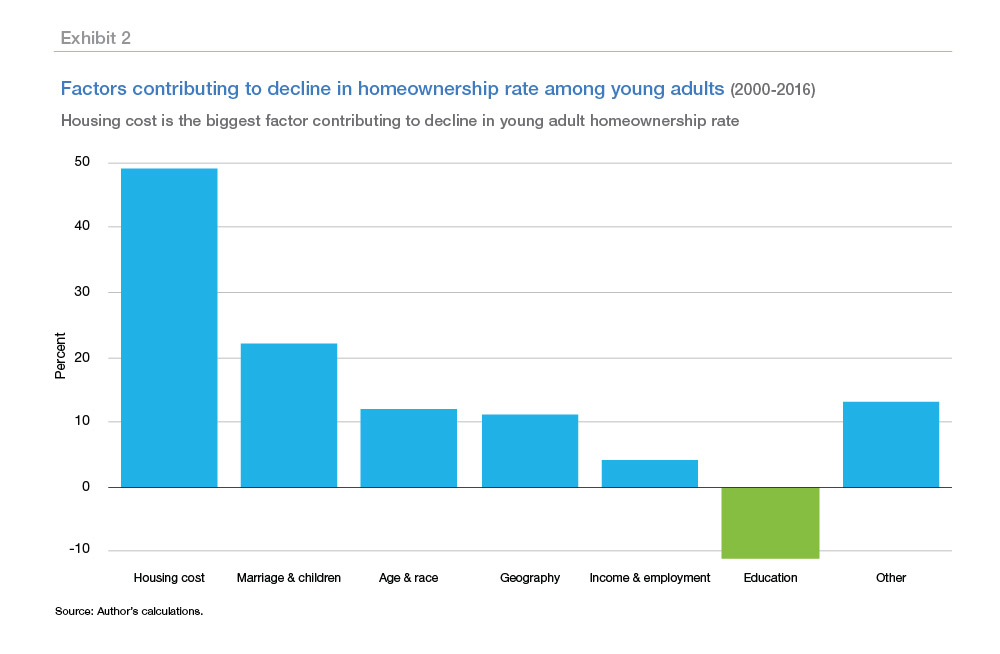 Almost 50 percent of the gap is caused by high housing costs, as measured by average home prices and rents. To put this in perspective, around 700,000 young adults did not buy a home between 2000 and 2016 because of increases in inflation-adjusted home prices and rents (Exhibit 3). 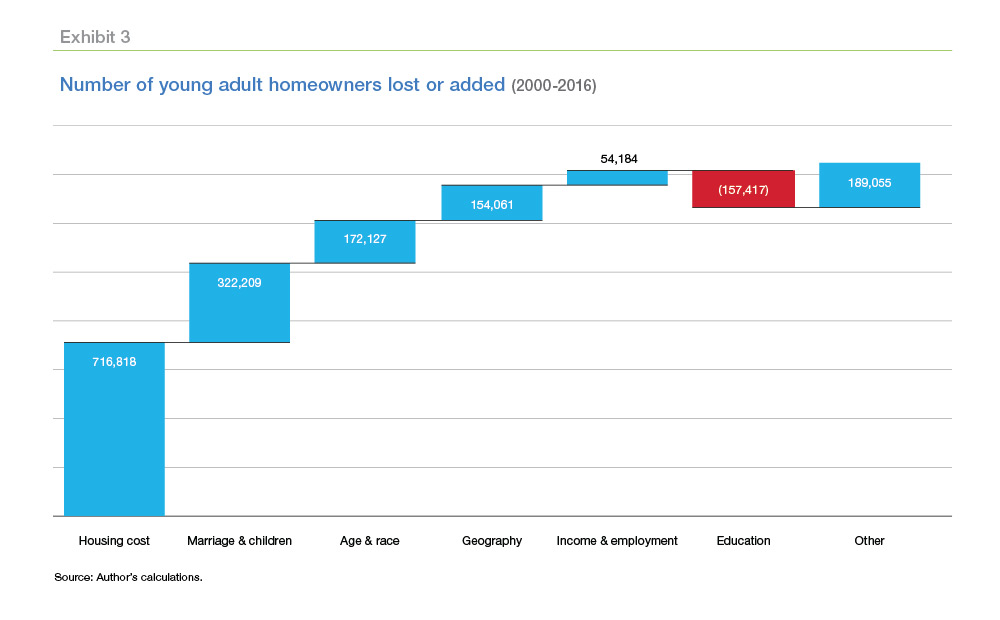 About 13 percent of the homeownership gap for young adults cannot be explained by differences in demographic variables, housing costs and other observable factors. This remaining portion of the gap may be due to unmeasured characteristics such as preferences, creditworthiness, borrowing constraints, disparity in financial wealth across groups and student debt.

Up, up, and away? The rising cost of housing relative to income

Rising housing costs have made the affordability of homeownership a major concern in the United States. House price appreciation has shown no signs of slowing down. By contrast, incomes have grown only modestly and have not kept up with the rise in house prices. As discussed, the impact of house price appreciation and income on the likelihood of homeownership is of similar magnitude. This means that if the ratio of home prices to income remains stable, the homeownership rate won’t be affected much. However, that’s not the case. The ratio of house prices to income has increased substantially since 2000, depressing homeownership. The ratio has grown more for young adults than the overall population, and even more so for young adults living in metro areas (Exhibit 5). 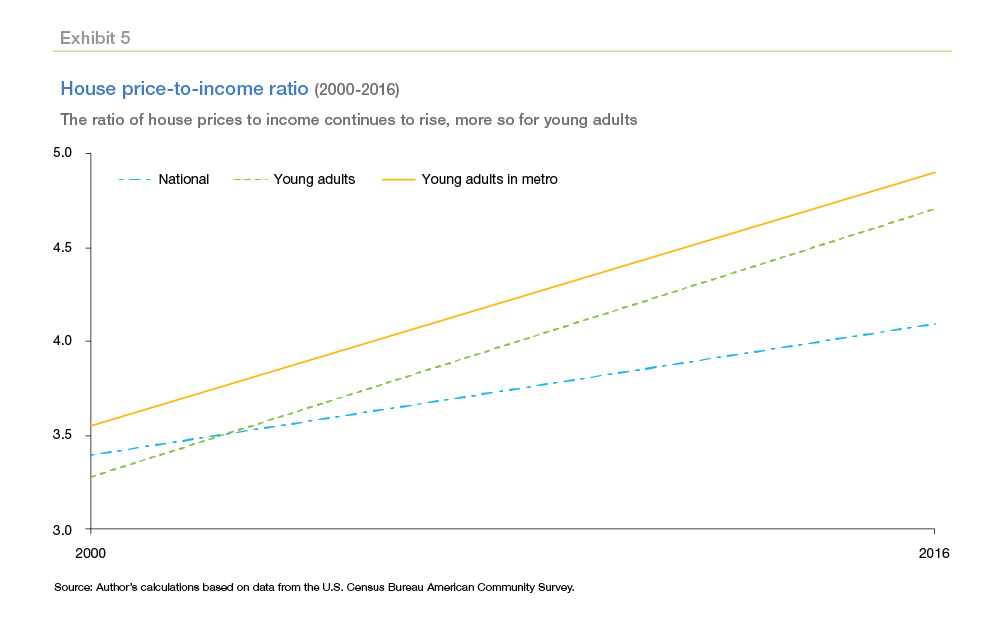 What does this mean for the future?

Similar to our Young Adult Household Formation Insight, we consider three scenarios to see how homeownership rates might evolve:3

Using the projected households from our March Insight, we estimate the homeownership rate for these young adults by 2025. Results are presented in Exhibit 7.

3 Details on the methodology can be found in Appendix A.5. Details on our choice of the optimistic and pessimistic scenarios are also mentioned in the previous research on household formation.

In the pessimistic scenario, with 20 percent increase in house prices and rents, homeownership rates decline to 55.9 and 34.2 percent respectively for young adults in 2016 and 2025, respectively.

To put these results in a historical perspective, consider the homeownership rate of 25–34-year- olds and 35-44-year-olds over time (Exhibit 8). The homeownership rate of these cohorts has been trending downward since the 1980s, and fell especially sharply after the Great Recession. There was an uptick during the housing boom of the early 2000s, but the decline after the crisis has left rates at levels not seen since the early 1980s. This decline has accumulated and will continue to accumulate over time: that is, there is a lagging cohort effect. This lag in homeownership rates for young adults carries through into the forecast for 2025, as can be seen in the declining forecasts for these two cohorts. 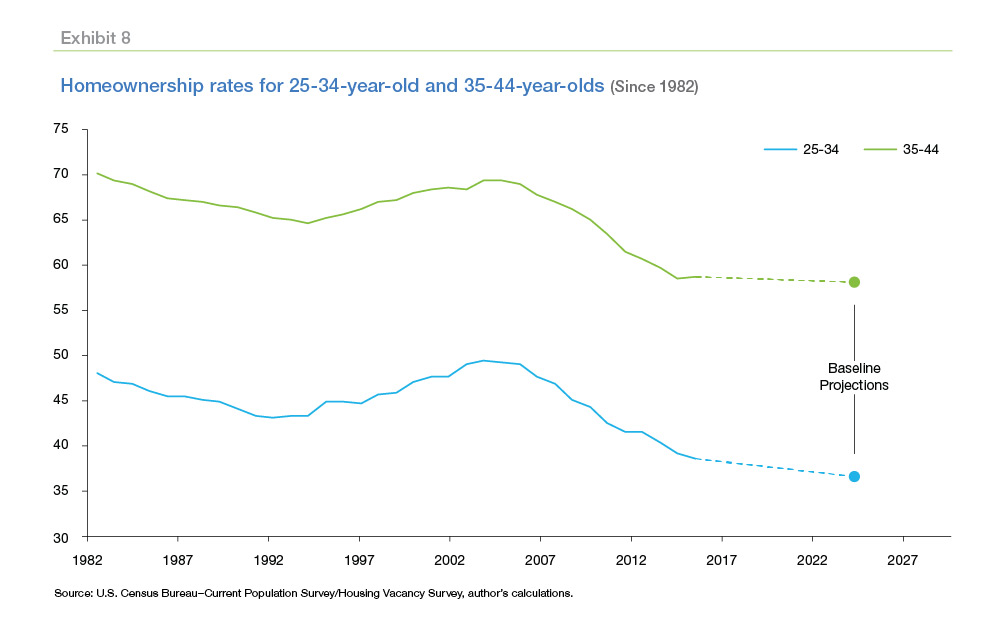 5 For more on Hispanic homeownership, see the June 2017 Insight.

Our analysis identifies housing costs as the dominant factor contributing to the decline in young adult homeownership, followed by changes in sociological factors such as declining marriage and fertility rates.

Morrow-Jones, H. A. 1988. "The Housing Life Cycle and the Transition from Renting to Owning a Home in the United States: A Multistate Analysis.” Environment and Planning A 20: 1165–84.

A1 Literature on young adult homeownership

Both demographic and social factors are strong predictors of owning a home, a study by Morrow- Jones (1988) that looked at transitions from owning to renting among young adults in the United States revealed.

Homeownership choices of individuals aged 20 to 33 is determined by their income, along with relative costs of owning and renting, availability of down payment, borrowing constraints, and demographic characteristics, a 1994 study by Haurin, Hendershott, and Dongwook and their subsequent study (Haurin, Hendershott and Wachter, 1997) found.

Differences in educational attainment and race account for the gap in homeownership between 1960 and 1990, Gyourko and Linneman (1996) found when looking at young adults with similar financial circumstances.

The decline in the share of married couples was a primary factor for declining trends in homeownership observed between 1980 and 2000 among head of the households aged 25 to 44, Fisher and Gervais (2011) concluded.

Lower income, higher prices, and more volatility decreases the likelihood of homeownership for younger households (those whose heads of household are in their mid-thirties or younger), Gabriel and Rosenthel (2015) found, though more so in 2000 and 2009 than during the height of the housing boom in 2005.

The slowdown in young people buying houses is due to the great recession and the collapse in housing market and changes in “transition to adulthood,” a term used by demographers to explain the stage of life when young adults leave their parents, marry, have children and gain full-time employment, Houle and Berger (2015) found. They also indicated that student loan debt is not dragging down the housing market or leading young adults to eschew buying a home.

Increases in the share of minority and unmarried householders are decreasing homeownership rates for householders aged 25 to 34, while higher levels of income and education attainment are providing a boost, Drew (2015) concluded.

Those who incurred student loans but did not complete their degrees are nearly 7.8 percentage points less likely to own a home than holders of bachelor degrees who are otherwise similar, Miller and Nijak (2018) found, using the Educational Longitudinal Study of 2002, which tracks high school sophomores to young adulthood.

A.2 Descriptive statistics of key variables 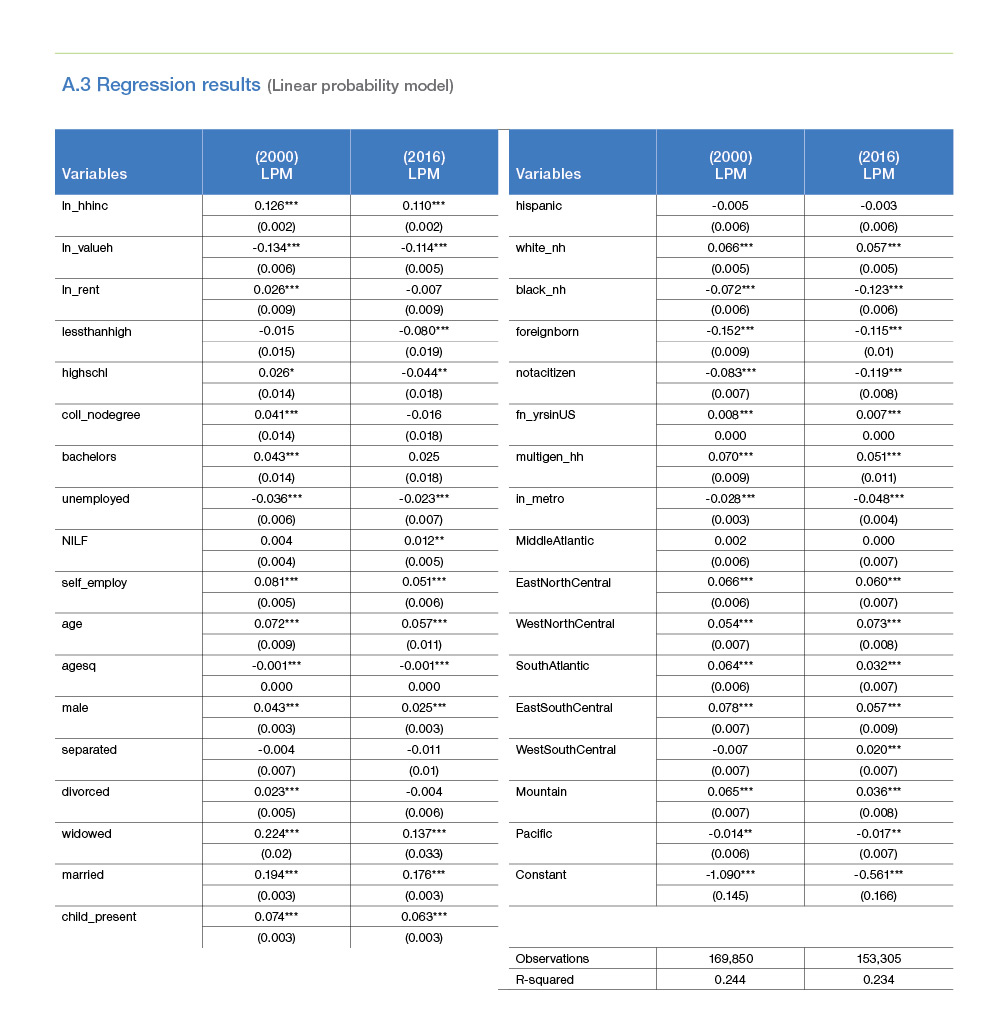 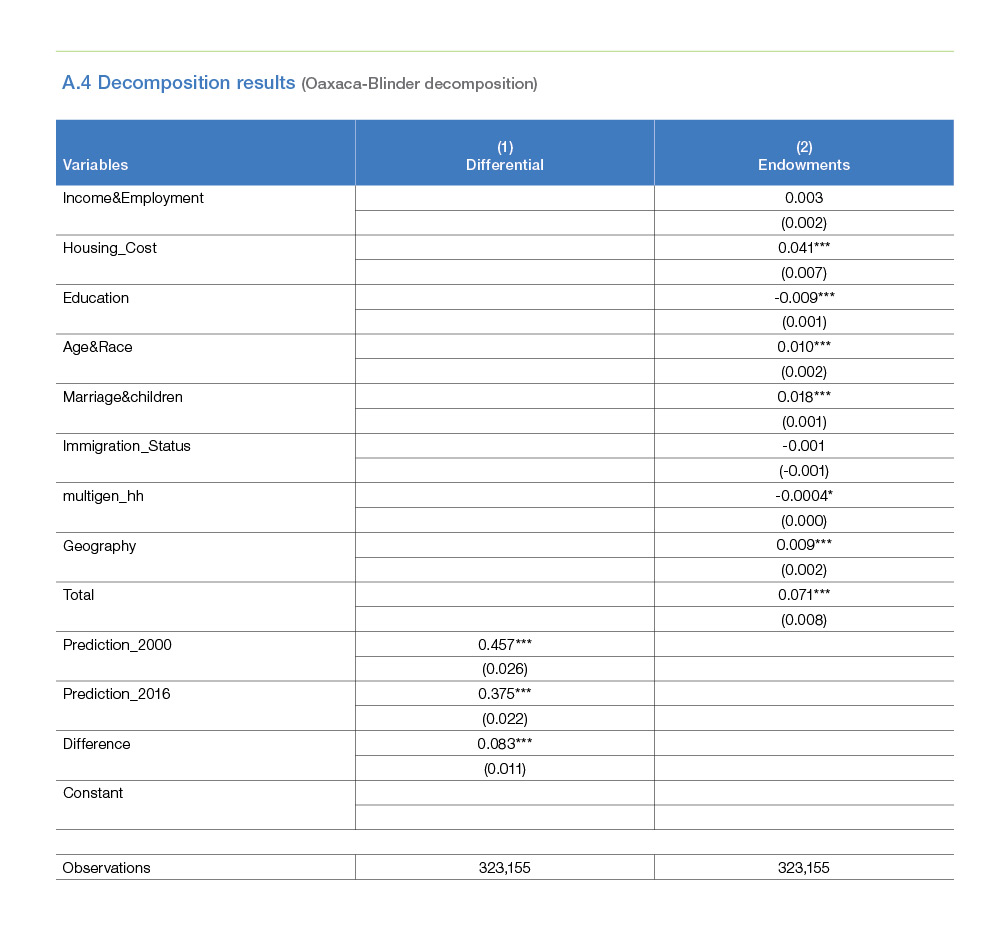 A5 Methodology for projecting homeownership

Our regression equation is:

bi are the regression coefficients and

Σ is the error term

Next, we estimate the means of each of these factors for 2016 by race and age. We then obtain the sum-product of the coefficients obtained through regression and the means of these factors. Finally, we multiply these sum-products with the number of households we estimated in our March Insight (Why is Adulting Getting Harder? Young Adults and Household Formation) to estimate the homeownership rate under the various scenarios. 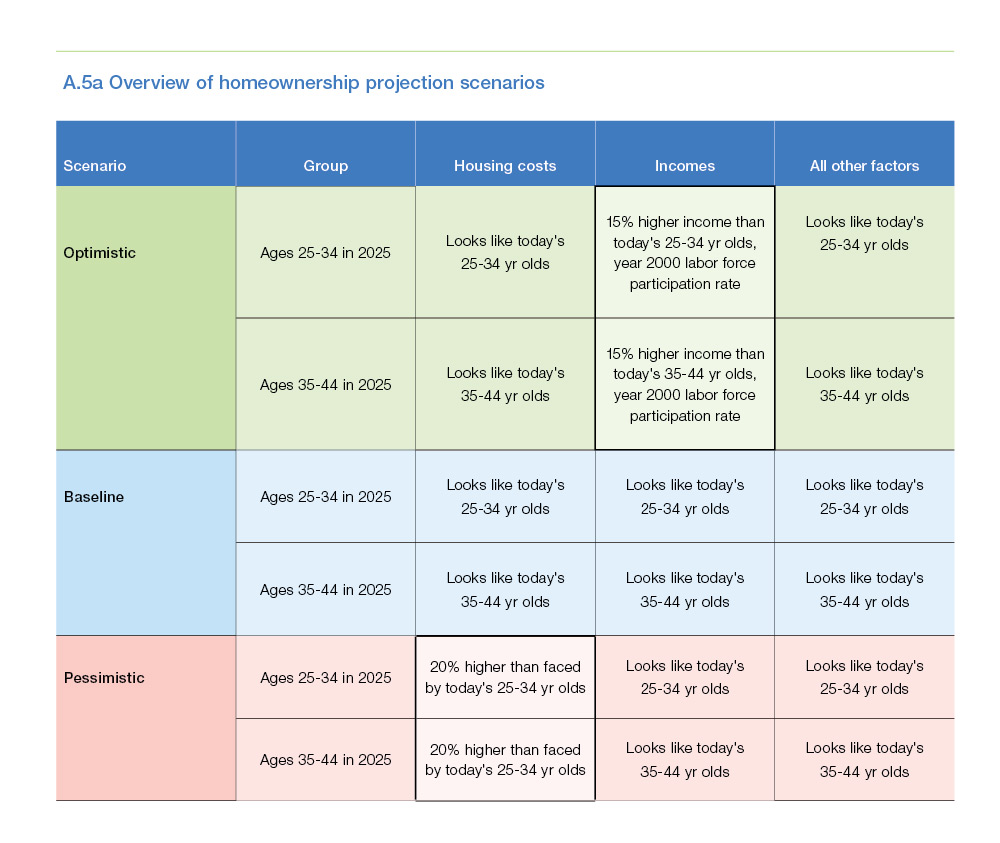 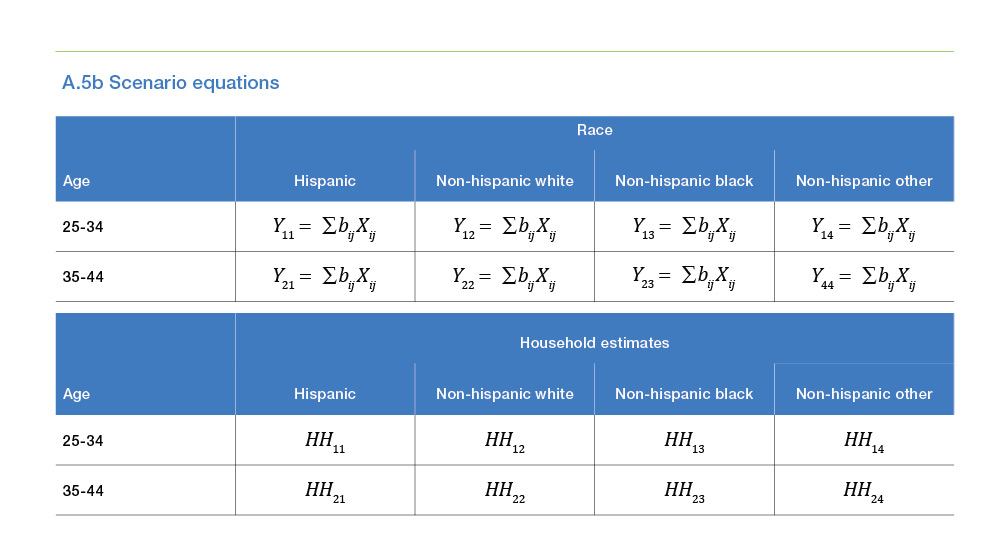 For the scenarios, we fix some of the factors (such as education levels and immigration status) at their 2016 levels and carry them through the years until 2025. We let some factors, such as sociological factors like marriage and fertility rates, evolve with time: that is, we assume that in 2025, today’s 25-34-year-olds will look like the current 35-44-year-olds. In other words, we impose the condition that future cohorts match past cohorts at a particular age. So, for example, in 2025, 35-44-year-old Hispanic marriage rates match the 2016 marriage rates for 35-44-year-olds. 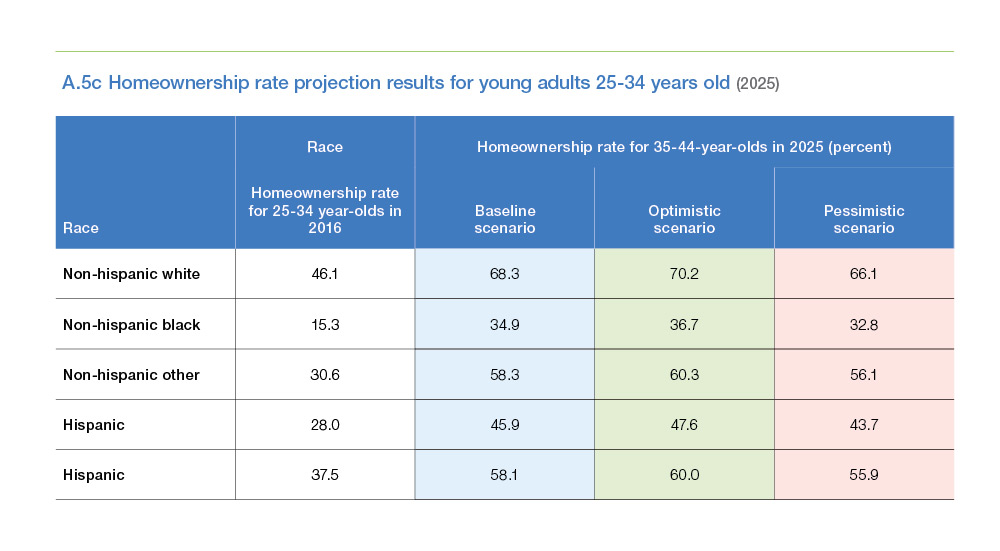 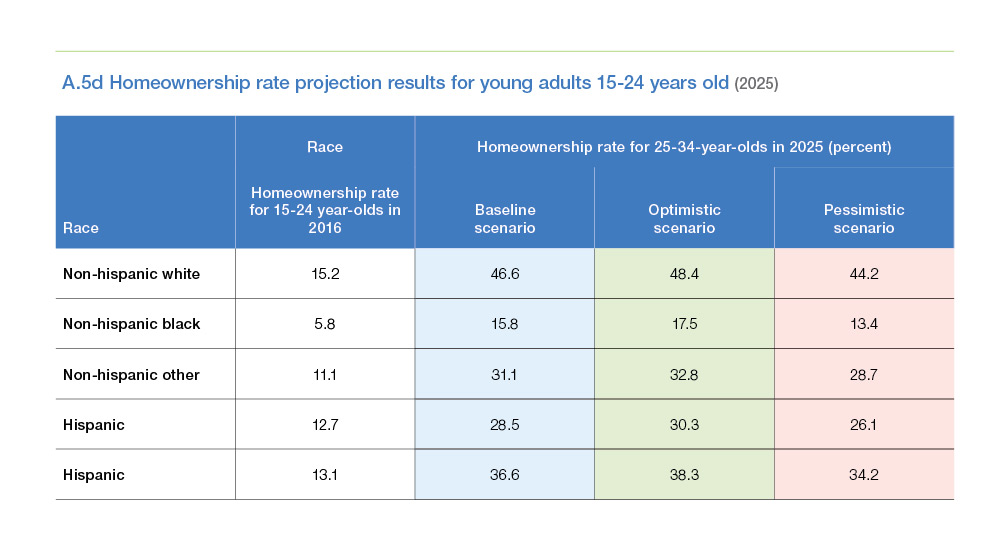