55+ers Poised to Have Significant Impact on Housing Market 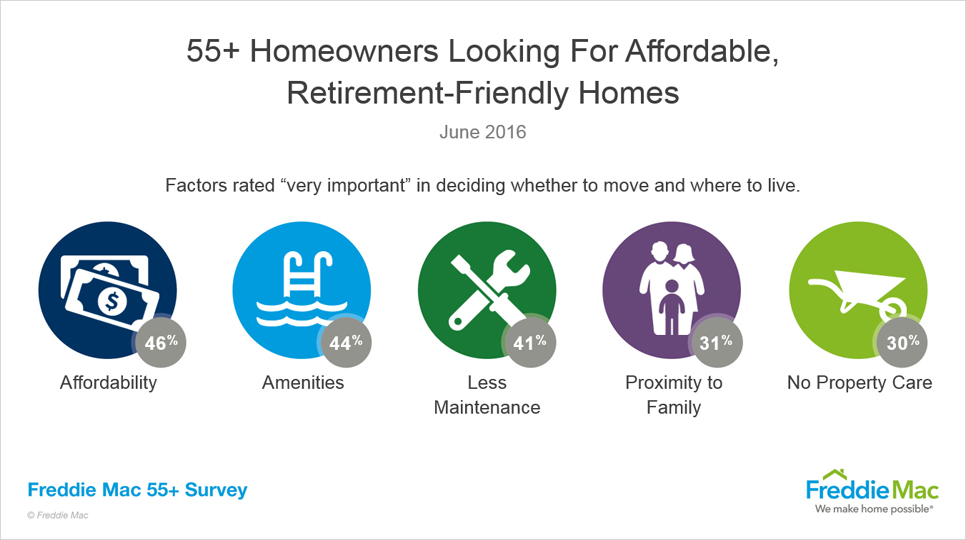 With 55+ homeowners controlling almost two-thirds or $8 trillion of the nation's home equity*, the housing decisions they make in the coming years will significantly reshape America's housing market.

The first Freddie Mac 55+ Survey focuses on this 55+ generation of 67 million people because of the impact they are having, and will continue to have, on affordable housing inventories, home prices, and the transition of America’s housing stock from one generation to the next.

The overwhelming message in this first survey is that homeownership works and that 55+ers are confident as they head into retirement or are already there. Some of the key findings include the following.

Why Baby Boomers Drive the Housing Market for Millennials

GfK conducted an online survey on behalf of Freddie Mac using the GfK KnowledgePanel® from February 10-23, 2016. A total of 5,914 interviews were completed online, including oversamples of African-Americans, Hispanics and Asians, obtained through additional opt-in sample. Interviews were conducted in both English and Spanish. GfK's KnowledgePanel® is the only large-scale online panel based on a representative random sample of the U.S. population. The margin of sampling error was +/- 1.27 percentage points for the full sample. Sampling error is higher for subgroups. See the report for the full methodology.

Today we are releasing our findings on 55+ homeowners. We are completing our analysis of 55+ renters and will release it once it is finished.