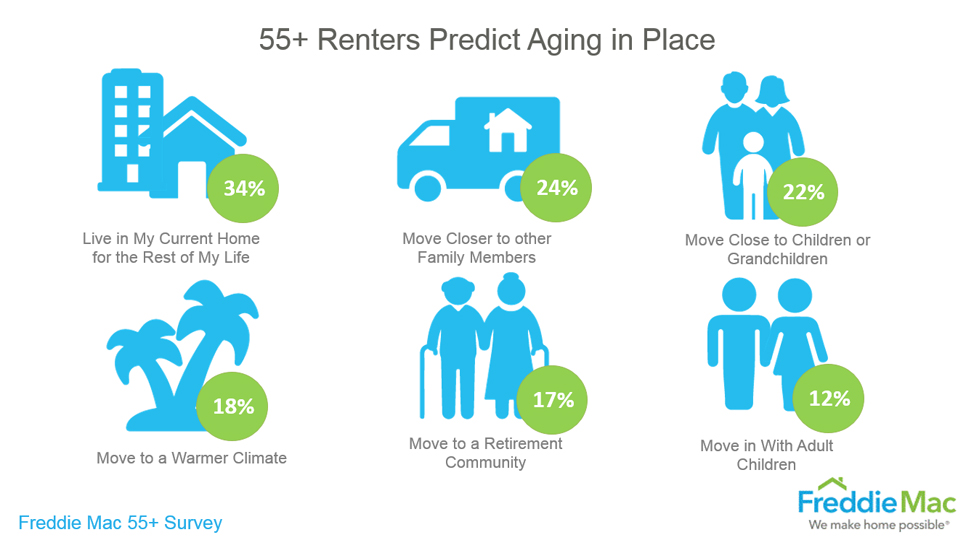 Baby Boomers and others aged 55 or older, including several million current homeowners, expect to move to rental units according to the first Freddie Mac 55+ Survey of housing plans and perceptions of people born before 1961.

Specifically, the survey shows an estimated 6 million homeowners and nearly as many renters prefer to move again and rent at some point. Of those homeowners and renters that expect to move again, over 5 million indicate they are likely to rent by 2020.

Further, majorities of 55+ renters (79 percent) and homeowners (83 percent) who expect to rent their next home also predict it will cost the same or less than their current one.

A population this large that expects to move into equally or less expensive rental housing is another indication of the pressure that will be put on already tight rental inventories and affordability in the coming years.

Some of the key findings when 55+ renters were asked about their housing preferences and predictions for the future include the following.

They plan to rent versus buying their next home

Among those 55+ renters who plan to move again, 71 percent of respondents plan to rent their next home. For many this may be a renter-by-choice decision as 38 percent say they have enough extra money to go beyond each payday including for savings. Further, more than half (59 percent) think it makes financial sense for people their age to be renters. This view is held by 67 percent of multifamily renters.

Their top attractions are affordability, amenities

Among the top "very important" factors influencing their next move, respondents picked affordability (60 percent), amenities needed for retirement (47 percent), living in a community where they are no longer responsible for caring for the property (44 percent) and being in a walkable community (43 percent).

They don't want to move far

They want family near (or in) their next home

GfK conducted an online survey on behalf of Freddie Mac using the GfK KnowledgePanel® from February 10-23, 2016. A total of 5,914 interviews were completed online, including oversamples of African-Americans, Hispanics and Asians, obtained through additional opt-in sample. Interviews were conducted in both English and Spanish. GfK's KnowledgePanel® is the only large-scale online panel based on a representative random sample of the U.S. population. The margin of sampling error was +/- 1.27 percentage points for the full sample. Sampling error is higher for subgroups. See the report for the full methodology.