Renters Say Cost of Utilities is More Concerning Than Rent Itself 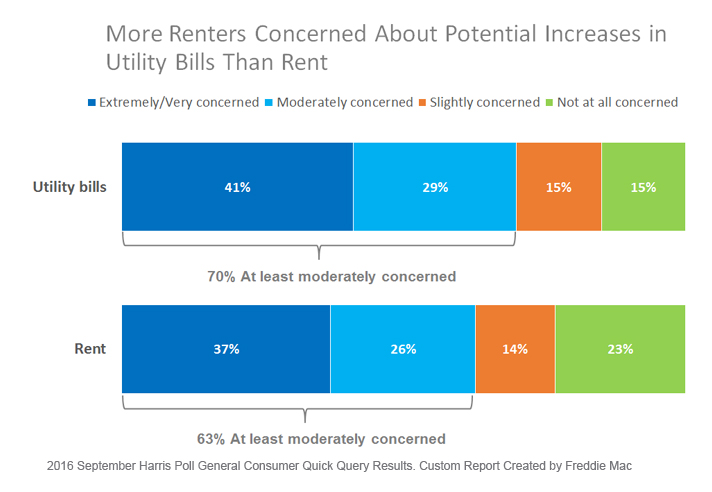 More renters are worried about rising utility bills than rising rents and nearly half of renters surveyed say they are willing to pay more for rental properties with cost-saving water and energy features. Additionally, 84 percent say green properties are generally better places to live.

Compared to earlier surveys, the latest research also shows more renters saying they are satisfied with their rental experience, but worried about their financial situations. A majority of renters also say they put more importance on saving for emergencies, children's education or retirement than on down payments for a home. There was also no change in the propensity to rent, with 55 percent saying they expect to rent their next home.

For the first time, the Freddie Mac survey included questions about renter perceptions and concerns about utility costs.

Most renters say the rental experience is satisfying and affordable

There was an increase in the percentage of renters who said they are satisfied with the rental experience.

More than half expect to rent their new home

Concern about household finances is rising

Each generation showed increased stress about their financial situations over the past year. Overall, the percentage of renters who say they have enough money to go beyond each payday fell from 41 percent to 34 percent over the past year. The percentage of renters who say they either live payday to payday, or don't have enough for basics between paychecks, rose from 59 percent to 66 percent. In addition, nearly one in five renters (19 percent) worry about eviction because they can no longer afford the rent.

Down payments are ranked below other savings goals

Renters, including Millennials and Gen-Xers, are less likely to say saving for a home down payment is absolutely essential compared to saving for emergencies or education. Asked to rank essential savings goals, each groups’ saving priorities are as follows:

Freddie Mac commissions Harris Poll to survey U.S. adults online each quarter to get their perceptions about renting. The most recent survey was completed in online Aug.– Sept. 2016 among 4,105 adults aged 18 and over, including 1,362 renters. Age, sex, race/ethnicity, education, region and household income were weighted to bring them into line with their actual proportions in the population.