Even as housing market activity begins its seasonal cooldown, our forecast for the best year in total home sales since 2006 looks increasingly on the mark. Through the first seven months of the year, home sales — both new and existing homes — totaled 3.4 million, the highest total for this same time period since 2006. And indications from both mortgage applications and pending home sales imply this momentum will be sustained throughout the third quarter. As such, housing remains a bright spot for the economy as the rest of the economy sputters along. 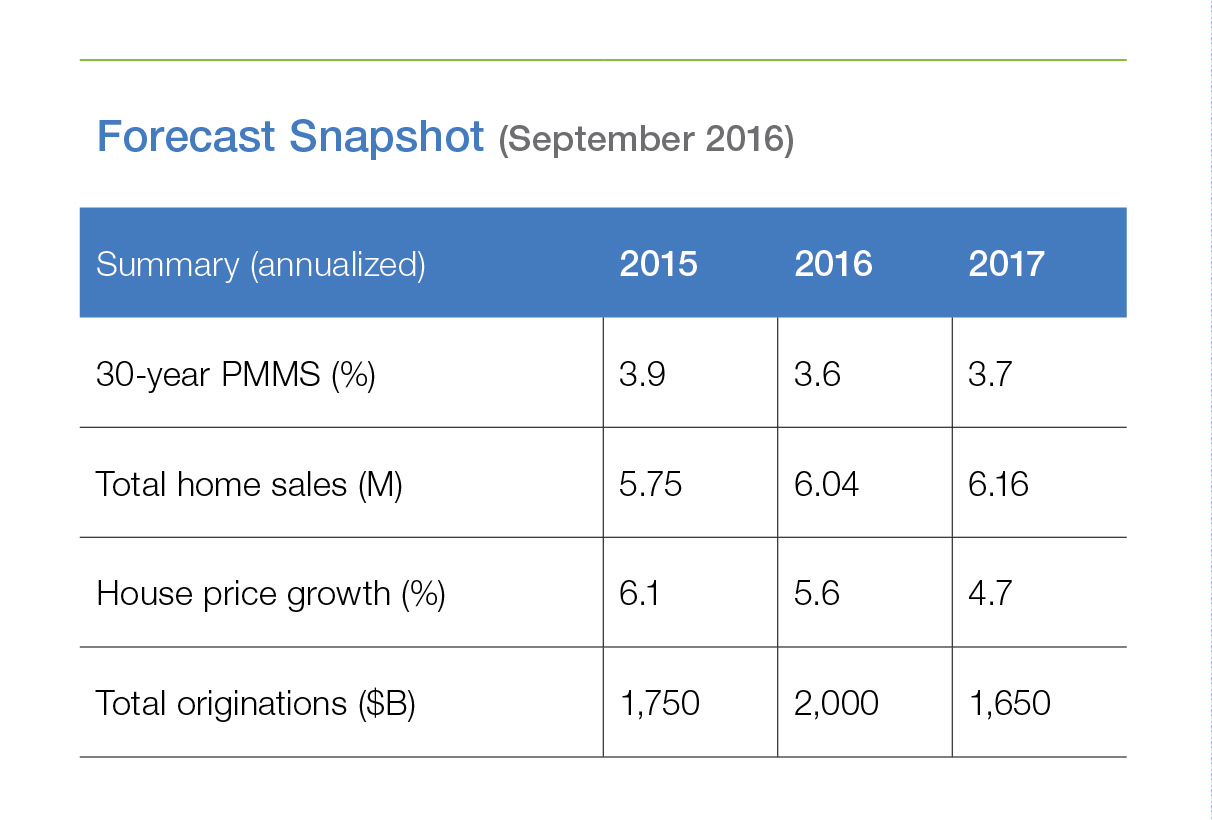 The economy sputters along.

Outside of consumer spending, there's not a lot to get excited about for economic growth. It's slow and steady as the economy continues to sputter along, just managing not to stall. After a disappointing second quarter most analysts are expecting to see a modest bounce back in Real GDP growth in the third quarter of 2016. Real GDP growth in the second quarter was 1.1 percent, but Real Final Sales, excluding volatile inventory investment, grew at 2.3 percent. Real Final Sales have been running around 2 percent per year since 2012, and we expect GDP to follow. We forecast Real GDP growth to average 2.1 percent for the second half of 2016, bringing 2016 full-year growth to 1.5 percent and 2017 Real GDP growth to 1.9 percent.

Inflation rose more than expected in August reflecting advances in rents and medical care. The core consumer price index — excluding volatile food and energy prices — increased 2.3 percent on a year-over-year basis. Headline consumer prices have not risen at a pace above 2 percent since 2012. However, we anticipate that consumer prices will rise a bit faster for the balance of 2016, with full-year consumer price growth at 1.5 percent. In 2017, we forecast that rebounding gas prices will push headline inflation to 2.2 percent.

The labor market, despite a disappointing August employment report , keeps chugging along. Though nonfarm payroll growth decelerated in August to 151,000, year-over-year job gains are over 2 million and the unemployment rate remains below 5 percent. Solid job gains finally seem to be translating into some modest real income gains with average hourly earnings up 2.4 percent year-over-year, up from 2.3 percent last year. Perhaps the best signal of labor market strength is the fact that total job openings in July were 5.9 million, the highest on record.

But there's limited upside potential for wage growth unless productivity growth turns around. Productivity, as measured by output per worker, has actually declined over the past three quarters to raise concerns about the viability of the economic expansion1. While productivity growth does tend to drop ahead of recessions there are many false positives, cases where productivity drops only to rebound without any subsequent recession. Still, it does no good to be sanguine about slowing productivity growth. As long as it remains slow, any gains in real income for America's households likely will be limited. We're cautiously optimistic that productivity growth will turn positive, with modest growth around 1 to 2 percent per year over the next couple of years, but we'll be watching trends in productivity closely.2

Despite limited real wage gains and rising house prices, housing markets have sustained momentum into the third quarter of 2016. Following the Brexit vote, the average 30-year fixed-rate mortgage has ranged between 3.41 and 3.50 percent from June 23 through September 15, 2016.

The decline in rates from 4 percent at the end of 2015 to about 3.5 percent in the third quarter of 2016 is helping to support homebuyer affordability and offset higher home prices. For example, a prospective homebuyer looking to finance a $250,000 home loan with a 30-year fixed-rate mortgage would pay about $850 less per year in principal and interest payments with rates at 3.5 percent rather than 4.0 percent. The principal and interest payments on the same $250,000 mortgage at 4 percent is approximately equal to the payment on a $266,000 30-year fixed-rate mortgage at 3.5 percent – or 4 percent more home for the typical homebuyer.

Nationally, house prices have increased about 3 percent over the six months from December 2015 to June 2016. The combination of rising house prices and falling rates have resulted in increased homebuyer affordability nationwide. In other words, the impact of lower mortgage rates has more than offset the rise in house prices, at least nationally. Of course, some markets have seen 6-month house price appreciation of over 6 percent, but, on balance, lower rates have maintained or slightly improved homebuyer affordability.

Looking ahead, we have revised up our forecast of home price appreciation to 5.6 percent and 4.7 percent in 2016 and 2017, respectively. This is up from last month's forecast of 5.3 percent for 2016 and 4.0 percent for 2017. We still expect house price growth to moderate over the next year as new supply comes to market and higher mortgage rates dampen homebuyers' demand, but at a more moderate pace than before.

If a homeowner decided to refinance on June 24 when would the origination occur and show up in the data? According to Ellie Mae, average time to close a conventional refinance mortgage is about 46 days. That would mean the loan would have been originated around August 9, too early to be recorded in recent mortgage origination data.

A few key trends are worth mentioning:

Following the financial crisis, for most quarters between 2010 and 2013, the "cash-out" refinance share fell, ranging between just 15 and 20 percent. In recent quarters the share of mortgages with loan amounts that were at least 5 percent higher than the original mortgage balance has been rising – 41 percent in the second quarter, up from a revised 38 percent in the first quarter of 2016.

It is also worth noting that with interest rates at near historic lows, more recent loans are being refinanced. The median age of a refinanced loan was 5.5 years in the second quarter, the lowest since the first quarter of 2015. The average interest rate reduction in the second quarter was about 1.1 percentage points, translating into mortgage payment savings on average of about $2,500 per year.

1 For an interesting discussion, see Brookings conference on productivity.