We've Been Here Before

Economic growth is bouncing back from a weak first half, the labor market is holding steady with low unemployment and modest wage gains. And Fed watchers are coming to the conclusion that a December rate hike is likely and worldwide economic growth is weak and prospects have gotten worse. We've been here before… last year.

As the economy sputters along a little bit faster than stall speed, the U.S. housing market continues to be a bright spot, though there's less room to run than in the prior few years. Mortgage activity, which benefited greatly from low mortgage rates, is starting to see a slowdown in refinance activity that will persist into next year as the mortgage market transitions to a purchase-dominated mix. 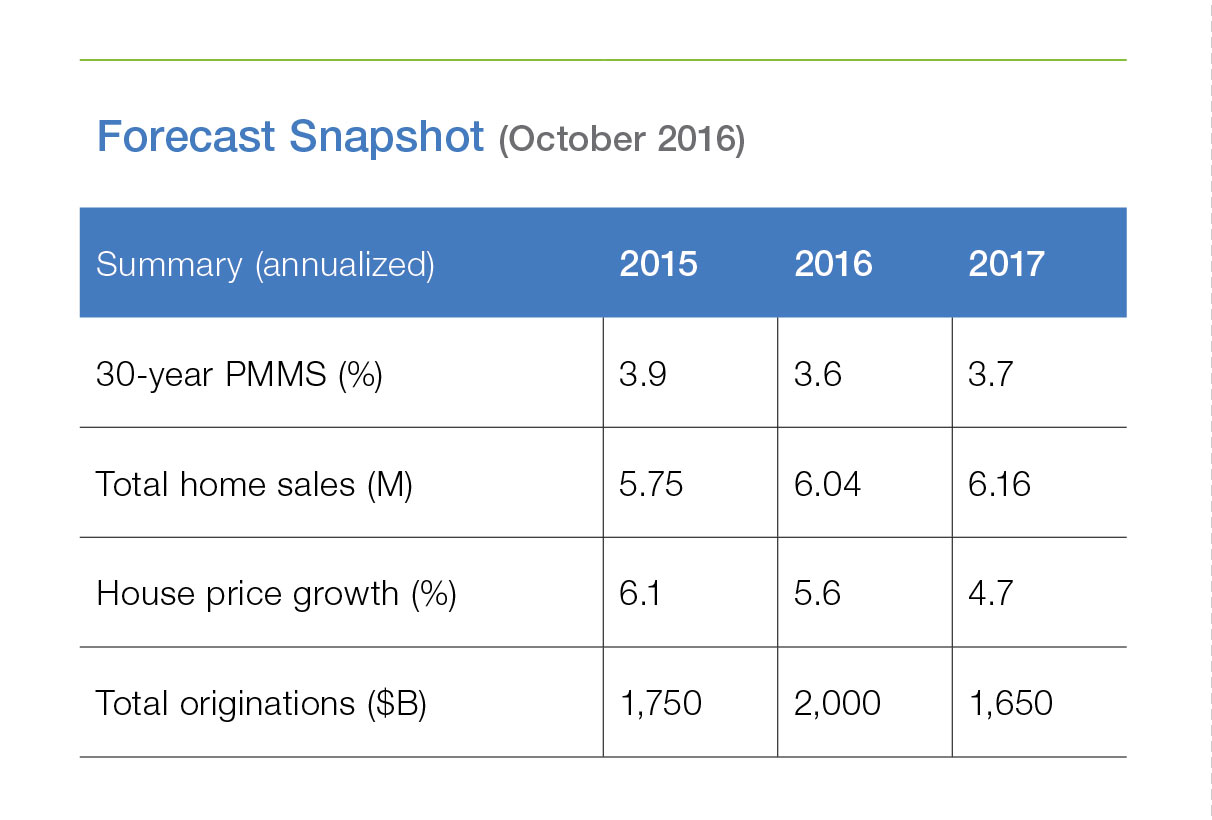 The economy is making modest gains. After a much-needed boost in nonresidential fixed investment, economic growth is looking up. The final estimate for second quarter real GDP growth was revised up from 1.1 percent to 1.4 percent. Growth in the second quarter was weighed down by inventories, as Real Final Sales (GDP growth minus inventory investment) increased 2.6 percent compared to 1.2 percent in the first quarter. Overall consumer spending remains the strongest component of GDP with growth in consumer expenditures adding 1.11 percent and 2.88 percent to GDP growth in the first and second quarters of 2016 respectively. Continued strength in consumer spending and a reduction in the drag from inventory spending should boost second half growth, resulting in full-year 2016 GDP growth of 1.6 percent. The economy should do modestly better in 2017, posting 1.9 percent year-over-year growth in our forecast.

As the recovery matures, gains in the labor market have leveled off. Total nonfarm payroll month-over-month growth was 156,000 in September, which is under the 170,000 that many were expecting. The latest Job Openings and Labor Turnover Survey (JOLTS) for August showed a decline of 388,000 job openings. Throughout 2016, the pace of hiring and the number of job openings have leveled off. The slowdown in job creation, job openings and hiring is not distressing because the economy is at or near full employment. A mature expansion operating near full employment only needs to generate enough jobs to keep the unemployment rate steady. Since October of last year, the unemployment rate has remained between 4.9 percent and 5.0 percent each month except for May 2016 when the rate dipped to 4.7 percent. We forecast that the unemployment rate will decline slightly over the next year-and-a-half, ending 2017 at 4.7 percent.

After a quiet summer, volatility in financial markets has kicked up in recent weeks. Following the Brexit vote at the end of June, yields on the benchmark 10-year Treasury fell to a record low of 1.37 percent on July 5. Rates bounced back and remained between 1.45 and 1.65 from mid-July through the beginning of September. Over the past month and a half yields have risen, reaching as high as 1.79 percent on October 12.

After the Brexit vote, the implied probability of a FOMC rate hike in 2016 dropped below 50 percent and remained there through mid-August. Since mid-August the market implied probability has risen to 67 percent. We've maintained our assumption that there would be at least one rate hike this year. However, as we saw last year, a Fed rate hike does not mean mortgage rates necessarily rise.

Whether or not long-term interest rates (including mortgage rates) rise depends more on global growth and worldwide bond yields than FOMC policy. Worldwide government bond yields have risen off their post-Brexit lows, but Japanese and most European bond yields remain below their pre-Brexit levels, with Japanese and Swiss 10-year yields still negative. In what's become a regular semi-annual occurrence the International Monetary Fund lowered their outlook for global growth in October.

Even if worldwide bond yields recover to the pre-Brexit status quo, mortgage interest rates are likely to remain low for an extended period. We've seen the 30-year mortgage tick modestly higher in recent weeks, but as of October 14, it was still below 3.5 percent. Our forecast calls for a gradual rise in rates throughout the remainder of 2016 and into 2017, with the 30-year fixed-rate mortgage averaging 3.9 percent in the fourth quarter of 2017. 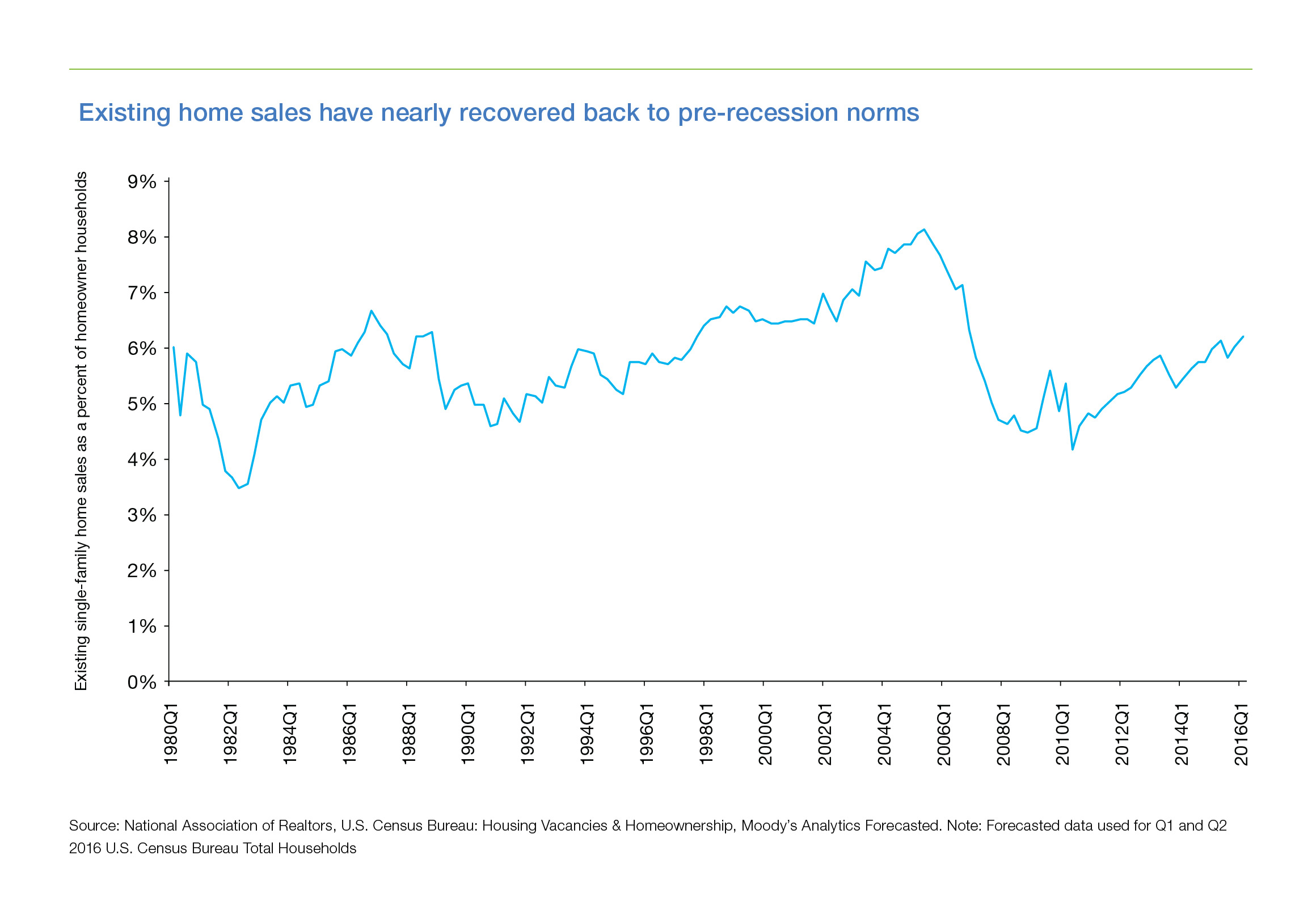 With mobility on the decline, existing home sales might not have that much more room to improve. A recent report by the National Association of Realtors showed repeat homebuyers expect to live in their current home for 15 years (first-timers expect to remain in their home 10 year), up from 9 years (6 years) in 2006. According to a report from the Urban Institute this declining mobility is affecting the mortgage market. As Americans age and labor market mobility declines, turnover of the existing housing stock should decline. In terms of existing home sales, we are probably close to an equilibrium level.2

We do not anticipate much increase in total home sales going forward. We forecast a slight decline in seasonally-adjusted sales in the fourth quarter. Next year, rising new home sales driven by increases in new single-family housing construction will push total home sales slightly higher, to 6.16 million in 2017 compared to 6.04 million in 2016 in our forecast.

With limited inventory of for-sale homes and strong buyer demand, house price growth remains robust across the country averaging about 6 percent on a year-over-year basis through June. Low mortgage interest rates are helping to somewhat offset the impact of higher house prices on homebuyer affordability and the labor market is starting to show signs of wage growth. House prices display considerable momentum as supply constraints gradually loosen. We forecast that house prices will grow at a 5.6 percent annual rate in 2016, moderating to 4.7 percent in 2017.

1 We estimate that long-run housing demand, due to population growth, second home demand, and replacement of existing stock to be around 1.6 or 1.7 million housing units per year. We only forecast 1.19 million and 1.36 million housing starts in 2016 and 2017 respectively.