Interest Rates Headed Higher. What that Means for Housing.

Interest rates surged higher over the past two weeks following the U.S. presidential election. The 10-year Treasury closed at 2.35 percent on November 18, 2016, up over 50 basis points since the close on November 8. Higher rates have been driven by higher than expected inflation and the near certainty the Federal Reserve Open Market Committee (FOMC) will raise the federal funds rate at their December meeting. As of November 14, the implied probability of a rate hike in December rose to 92 percent, up from a low of 7.7 percent on June 27, 2016. 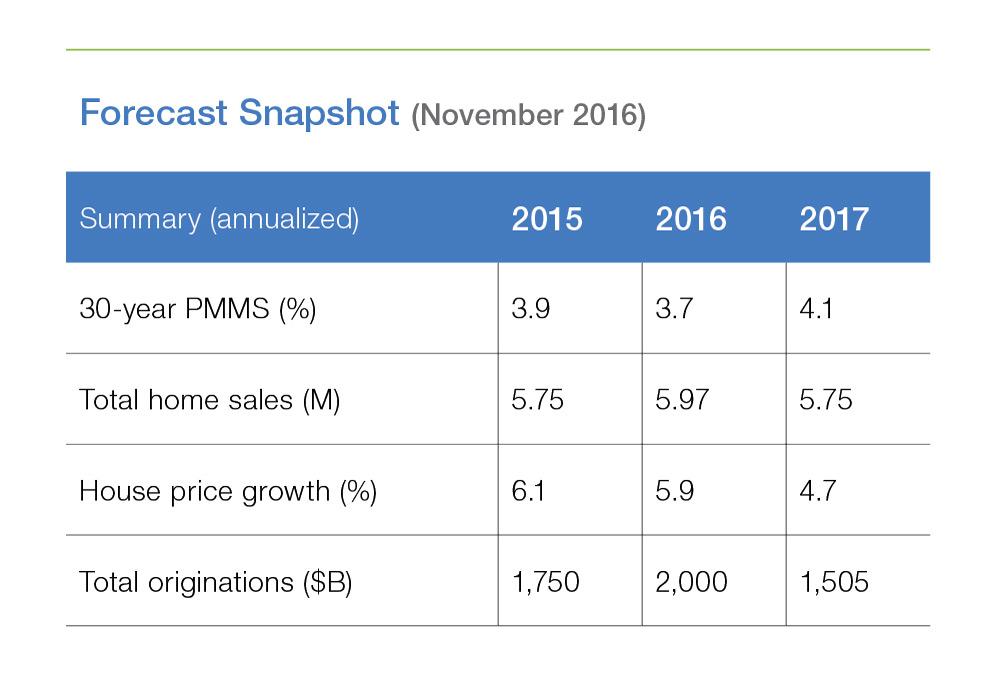 Not only has the likelihood of a December rate hike increased, but expectations for future rate increases have shifted as well. The median expectation amongst FOMC members for the appropriate level of the federal funds rate was significantly higher than the probability implied by futures markets at the time of the last FOMC press conference in September. In recent years the FOMC median has been consistently above market expectations, and over time the FOMC expectation has drifted down towards market expectations. In November, that trend reversed with market implied expectations for the federal funds rate shifting up.

We expect that interest rates will have more modest increases in store and that mortgage rates throughout 2017 will be significantly higher than what we thought last month. How will that impact the economic and housing market outlook? To give us some idea of what to expect, we examine a recent episode when rates rose unexpectedly.

How did housing respond to the Taper Talk?

In 2013, following the "Taper Talk," mortgage interest rates rose by a full percentage point from 3.5 percent in May to 4.5 percent in September. We can look back at this experience to get an idea of how housing and mortgage markets might respond to recent rate increases. We saw the following trends at the time of the Taper Talk, summarized in Exhibit 1, and discussed below. 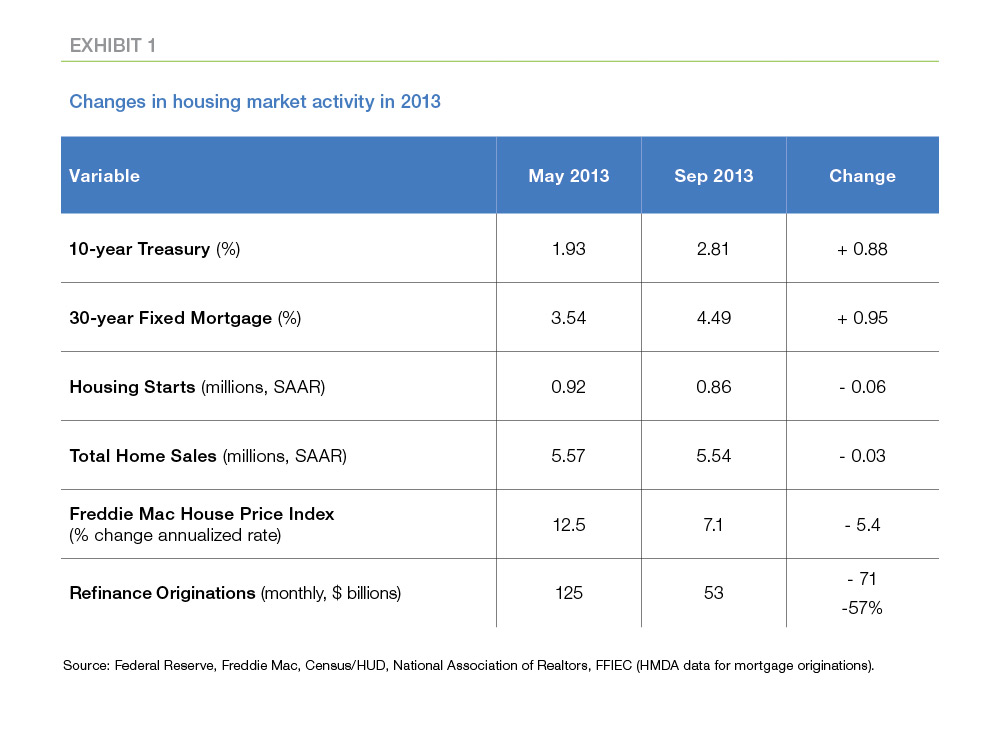 In 2017, we expect to see some additional interest rate increases following the recent movements. Much like in 2013, we expect housing markets to respond negatively to higher rates.

Higher mortgage rates will drive down homebuyer affordability, dampening demand and weakening home sales, softening house price growth, and slowing the growth in new home construction. Mortgage market activity will be significantly reduced by higher rates. Exhibit 2 below summarizes our forecast for 2016 and 2017: 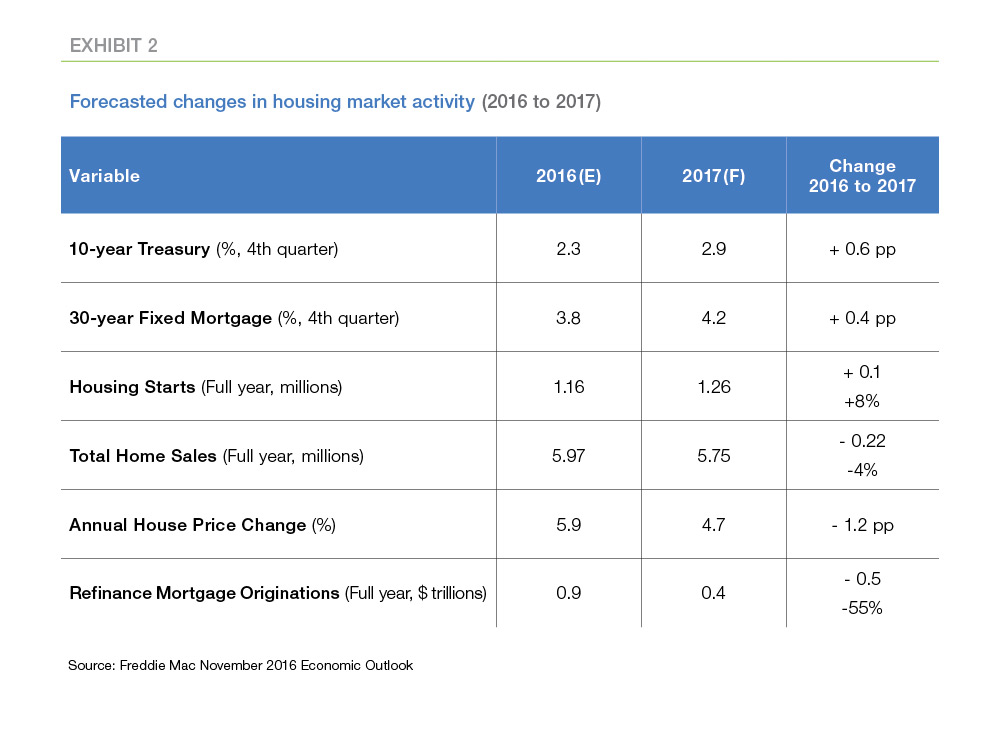 It's unclear exactly what fiscal policy will look like in the Trump administration. Our working assumption is that some sort of fiscal stimulus will be passed in early 2017 that includes a mixture of infrastructure spending and tax cuts. This stimulus along with rising business confidence will result in higher real economic growth than in our prior forecast. However, the increase in interest rates will likely subtract from growth. Absent any firm evidence on the details of policy proposals, we assume that these two forces will offset each other and economic growth for 2017 will average 1.9 percent for the full year.

Headline Consumer Price inflation, as measured by the Consumer Price Index, has been ticking higher in recent months, averaging 0.3 percent month-over-month in September, and up 1.5 percent on a year-over-year basis from September 2015 to September 2016. Recent trends and the increased likelihood of expansionary fiscal policy next year indicate inflation is likely headed higher. For the full year 2017, we expect consumer price inflation to average 2.2 percent.

Rates headed higher, but not too much higher

The recent increases in interest rates are likely to stick, but we don't expect to see substantially higher rates absent some major shock or shift in economic policy. There's a near consensus amongst analysts that our call of a December rate hike will hold true. What's uncertain is the pace of increases in 2017. We saw the FOMC hold off on increasing rates for most of 2016 after hiking in December 2015. We don't expect the same to occur in 2017. With the labor market at full employment and inflation showing signs of picking up, we anticipate the FOMC will move more than once in 2017 pushing short-term interest rates higher, with the 1-year Treasury rate reaching 1.5 percent by the fourth quarter of 2017.

Rising interest rates will exacerbate growing affordability challenges in many markets. Even prior to the recent interest rate movements, we've seen housing market activity start to level off, with single-family housing starts flat lining for most of 2016 and existing home sales starting to lose some momentum. Regardless, 2016 will still end up being the best year for home sales in a decade, but 2017 will be hard pressed to match those levels.

With limited new supply coming online, new home sales will only increase slightly, and existing home sales are likely to decline next year as affordability becomes a challenge. We expect total housing starts will reach 1.16 million in 2016. For 2017, higher mortgage rates will slow the pace to about 1.26 million starts, still far short of long-run demand of 1.6 to 1.7 million units.

Total home sales will decline about 220,000 units from 2016 to 2017. New homes sales will rise, but not enough to offset declines in existing home sales.