Performance in the multifamily market remains healthy in 2017, even as it continues to moderate from cyclical highs. 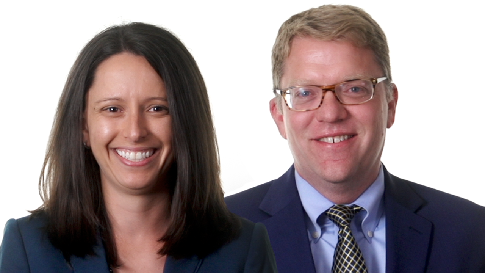 First Half of 2017 in Review: Growth Continued

As expected, the multifamily market remained strong in the first half of 2017 as it continued to moderate from the cyclical peak. Vacancy rates started to trend upward due to new supply entering the market. Meanwhile, rent growth picked up following a slowdown at the end of 2016. Several of the larger metropolitan areas, such as San Francisco and New York City, experienced more pronounced slowing than the broader market. Although rent growth moderated in most metros in the past year, the majority continued to perform above their pre-recession averages. Market uncertainty kept many multifamily investors on the sidelines in the first quarter of the year, but they are starting to return as interest rates moderate and the economy continues its steady upward trajectory.

Economic growth continued to support strong multifamily fundamentals. The labor market grew at a steady pace, similar to 2016, and outpaced population growth. Through June, the economy added on average 180,000 jobs per month, on par with the first six months of 2016, for an average of 2.2 million over the year. Meanwhile, the unemployment rate continued to decline, reaching 4.4 percent in June, down 0.5 percent year-over-year and near a 16-year low. However, this low of an unemployment rate is not sustainable in the long-term; seeing improved opportunity, previously discouraged workers as well as new entrants will look for jobs, thereby increasing the labor pool.

Despite the low unemployment rate, wage growth remains stubbornly low, but is moving in the right direction. The Employment Cost Index (ECI) reported first quarter annual total compensation growth of 2.4 percent across all workers. ECI growth has averaged 2 percent annually since 2010, bouncing between 1.7 and 2.6 percent over the past six years. However, compared to the pre-recession average of 3.9 percent growth from 1983 to 2007, wage growth remains stunted; as a result, many market participants believe the labor market has not yet reached full employment.

With the economy adding jobs at a good pace and moderate wage growth, household formations increased. In the first quarter, 1.2 million new households were formed – of them, 365,000 rented homes while 854,000 bought. This is the first time since 2006 that more new households bought homes than rented. The homeownership rate has slowly increased from its cyclical low of 62.9 percent in the second quarter of 2016 up to 63.6 percent in the first quarter of 2017. Generally, demand for rental housing slowed in the beginning of the year. But this is not a sign of a shift away from multifamily rental demand. Realpage reported multifamily absorptions picked up in second quarter 2017 -- to 280,000 units from 235,000 units in the first quarter, annualized. Furthermore, this second quarter absorption rate is in line with Realpage’s reported 2016 annual rate of absorption around 280,000 units. The current demographic drivers of the Millennial cohort, a more ethnically diverse population, and household preferences for rental housing all imply demand for rental units will continue.

Multifamily permits and starts have been abating over the last two years, down 14 percent and 10 percent, respectively. Meanwhile, multifamily completions are expected to increase, resulting in more units entering the market this year than any other since the late 1980s, as shown in Exhibit 1. As of May, 330,000 units delivered annually, up 6.7 percent year-over-year. But that number likely will be even higher, given that construction starts averaged 380,000 units each of the past two years, whereas completions averaged only 310,000 units each year. 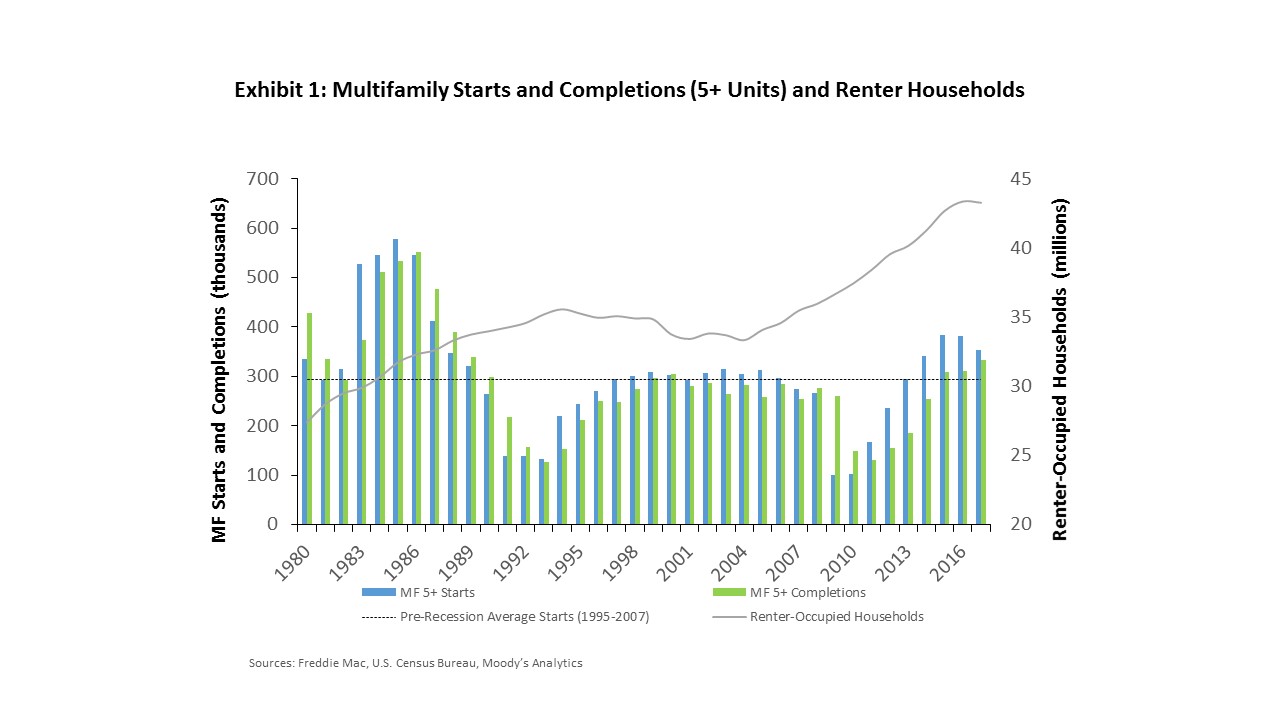 In most markets, rent growth continued to moderate in 2017 after a year of landlords ceding some of their pricing power. Reis reported annual effective rent growth of 3 percent through second quarter 2017, while Axiometrics reported slightly more subdued growth of 2.5 percent annually through June. Rent growth remained subdued at the high end of the rent spectrum, including in several markets that saw an explosion of new luxury inventory, namely New York City, San Francisco, and Boston. Rent growth in these areas will remain suppressed temporarily as the new supply is absorbed. 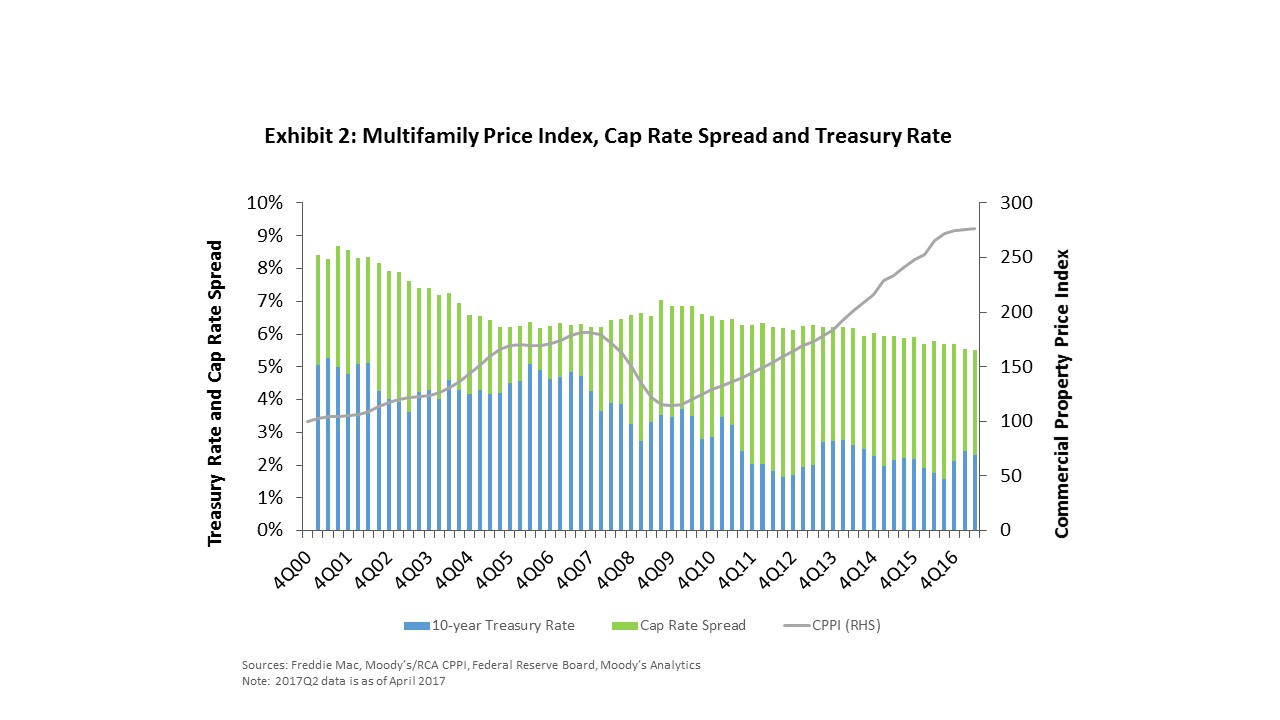 The 10-year Treasury rate remained elevated after the election, reaching 2.6 percent in March, up 120 bps from a cyclical low in July 2016, but have since abated slightly, down to 2.2 percent as of June. The spike in interest rates and uncertainty in the market slowed origination volume as investors remained vigilant regarding market swings. While origination volume is not yet finalized for 2016, we predict it ranged from $265 billion to $270 billion, slightly higher than the Mortgage Bankers Association (MBA) projection of $260 billion.

Despite the increase in the 10-year Treasury rate, capitalization (cap) rates were flat through the first part of 2017, at 5.5 percent as of April, per RCA. While cap rates and Treasury rates are correlated – typically, as Treasury rates increase, so do cap rates – the recent interest rate spike did not cause an increase in cap rates. With the cap rate spread (difference between cap rates and 10-year Treasury) historically wide, reaching 410 bps in third quarter 2016 compared to the average of 320 bps going back to 2001, the interest rate increase was absorbed in the cap rate spread.

Second Half of 2017 and Beyond: Status Quo

Most measures suggest the multifamily market will continue to grow in line with the historical average for the rest of 2017. Employment growth is expected to remain near 2016 growth levels and demand for multifamily units to stay strong due to lifestyle preferences and demographic trends. New deliveries are expected to peak in the second half of this year and remain elevated into 2018 before moderating. The new supply is expected to outpace demand nationally in the short-term, causing vacancy rates to increase, albeit more slowly than expected. Because of the tight vacancy rates through the end of 2016 and into 2017, vacancy rates for the rest of 2017 have been revised downward, to 4.7 percent. As vacancy rates increase more slowly than originally expected, rent growth is expected to remain strong through 2017, possibly exceeding the 2016 rate at the national level. Furthermore, forecasts of higher wage growth will help spur more housing demand. Combined, we expect gross income growth in 2017 to be slightly higher than in 2016, as shown in Exhibit 3. 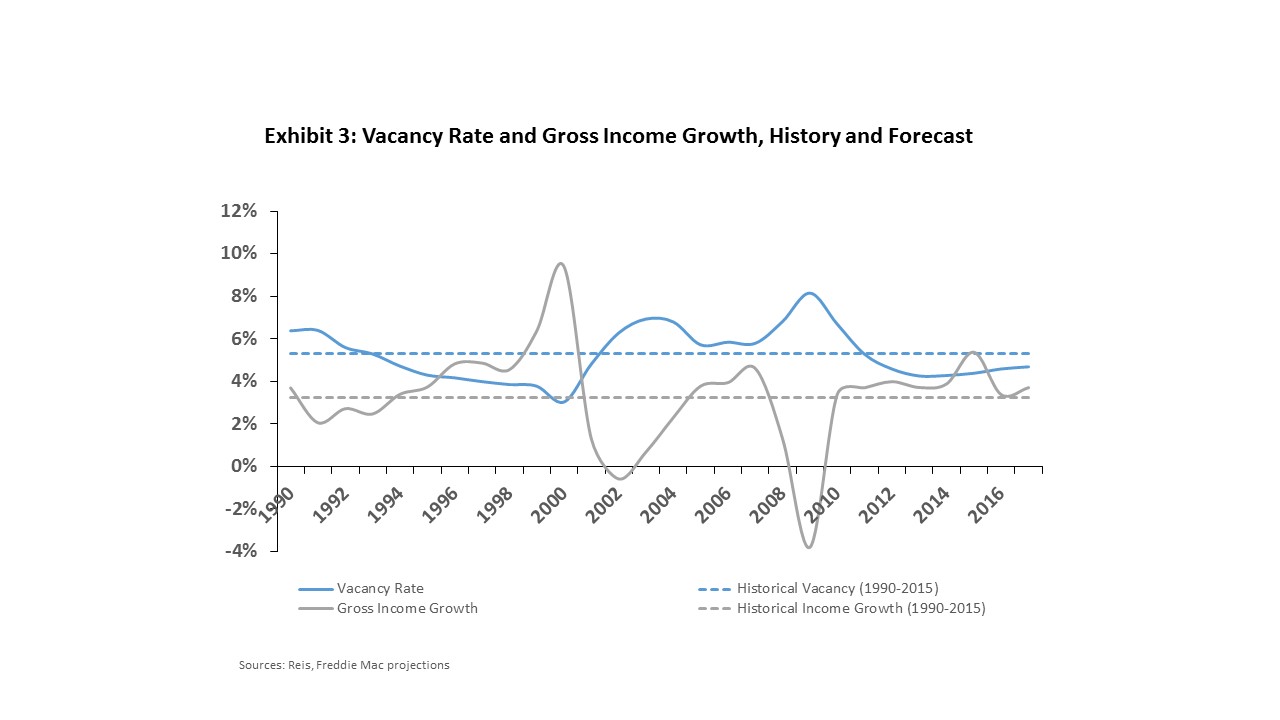 While at the national level demand and supply remain relatively tight, performance across metros areas will vary. Construction starts in many markets are elevated compared to levels in the early 2000s and several metros have vacancy rates above the historical average. As shown in Exhibit 4, areas with below-historical-average vacancy rates are better poised to absorb new supply without significantly disrupting multifamily performance. However, areas with increased new supply and above-historical-average vacancy rates can expect slower absorption and potential negative impacts on multifamily fundamentals. 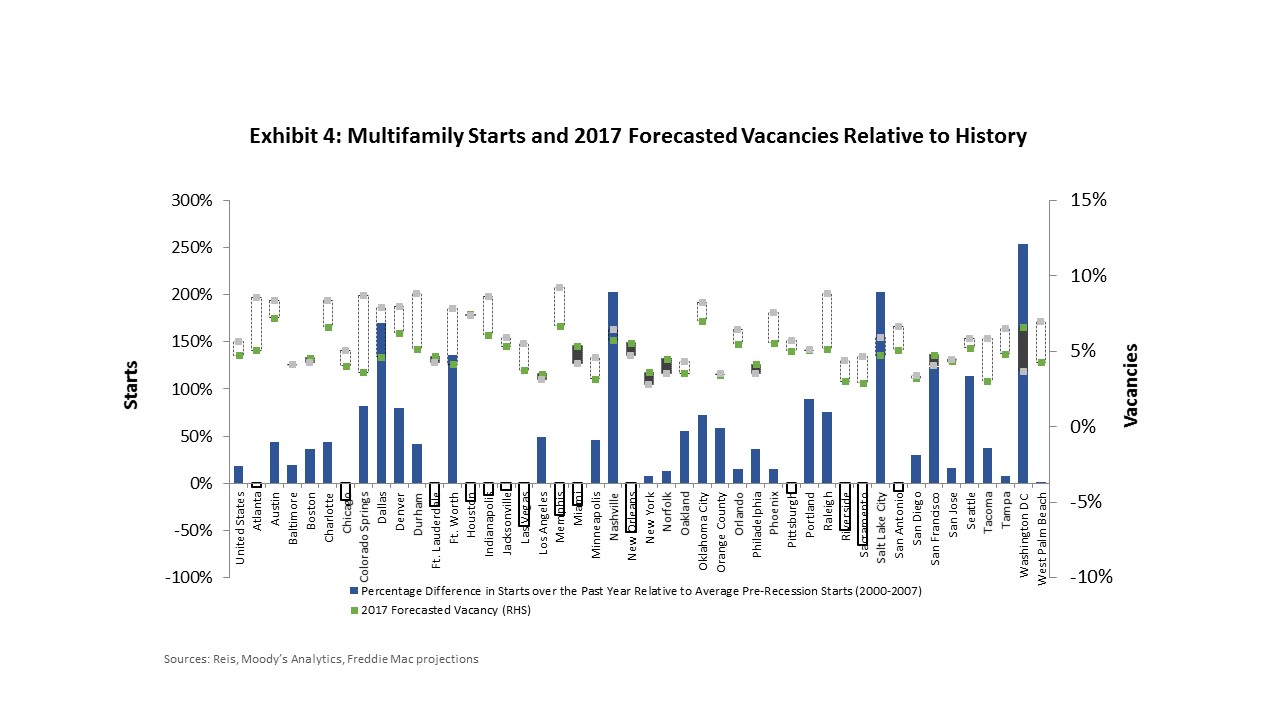 New construction starts have started to pull back in several metros, most notably Nashville; at the same time, construction has increased in several places, namely Fort Worth, Colorado Springs, and Raleigh. Despite higher vacancy rates, Washington, D.C., once again tops the list with the most construction compared to historical average, along with Nashville, Dallas, and Salt Lake City. For the nation and majority of metros, vacancy rates in 2017 are expected to increase but remain below the historical average, implying there is room for more supply to be absorbed. Looking ahead into 2018, we expect the gap between vacancy rates and historical rates to narrow but remain below the historical average at the national level and in most markets.

Expected rent growth for the rest of 2017 will continue to be mixed across the metros, as shown in Exhibit 5. It will moderate most in areas that previously experienced the highest levels of growth – such as Seattle, Tacoma, Sacramento, Nashville, Portland, and Atlanta – but remain above historical averages in those cities. Meanwhile, San Francisco, New York, and Boston are expected to experience a rebound in rent growth by the end of 2017 compared to 2016, but remain at or below their historical and the national averages. Our models suggested that rent growth is relatively sensitive to elevated vacancy rates in these markets. Due to increased new supply, vacancy rates in these markets are above their historical averages, putting downward pressure on rent growth. If absorption is strong mid-year in these markets, rent growth may pick up by the end of this year. 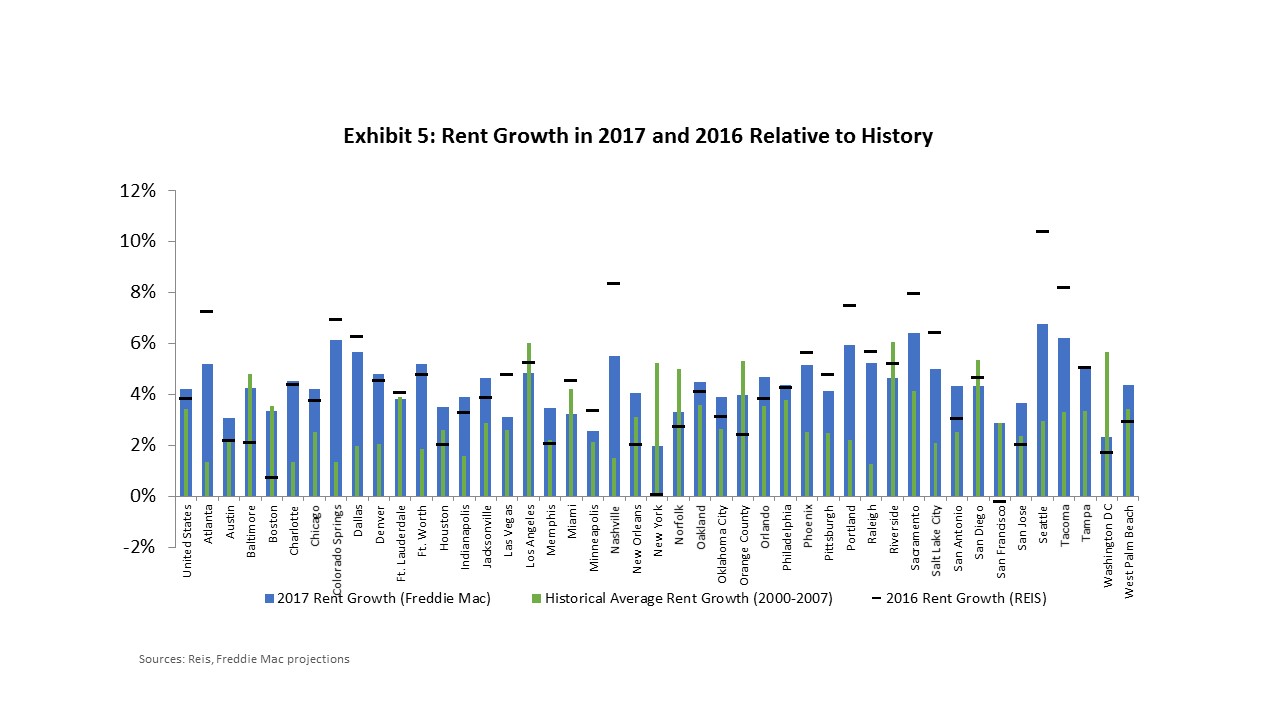 Taking these metrics into account, West Coast metros still will dominate the top 10 list based on gross income growth in 2017, but more secondary markets from across the South are also poised for strong growth through the rest of the year, as shown in Exhibit 6. As vacancy rates remain tighter in 2017 than expected at the beginning of the year, areas including Nashville, Dallas, and Raleigh/Durham are forecast to see stronger gross income growth.

Looking beyond 2017, vacancy rates are expected to continue to trend up, but the economy’s overall performance will determine the impacts to rent growth. With good macroeconomic conditions, rent growth will continue near the current pace. However, any uncertainty about the economy’s well-being could change that. 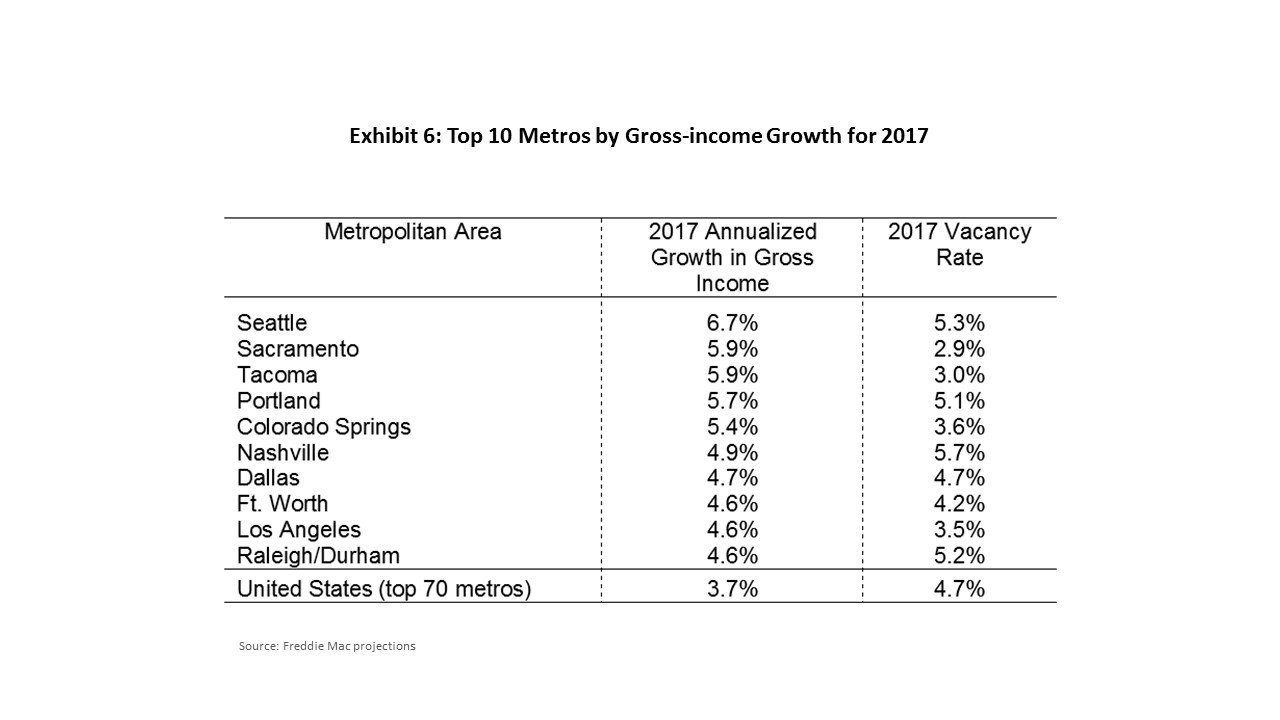 On the debt side, like property revenues and prices, multifamily origination volume is expected to grow throughout 2017. While the multifamily market continues to attract investments and capital, market uncertainty in the first part of the year suggests 2017 full-year volume may differ from original forecasts. Property prices are expected to grow, but slower than in the previous few years and with more moderation in large, higher-cost metro areas. Taking all these factors into account, we expect origination volume to grow by 3 to 5 percent in 2017, to between $270 billion and $280 billion, as shown in Exhibit 7. 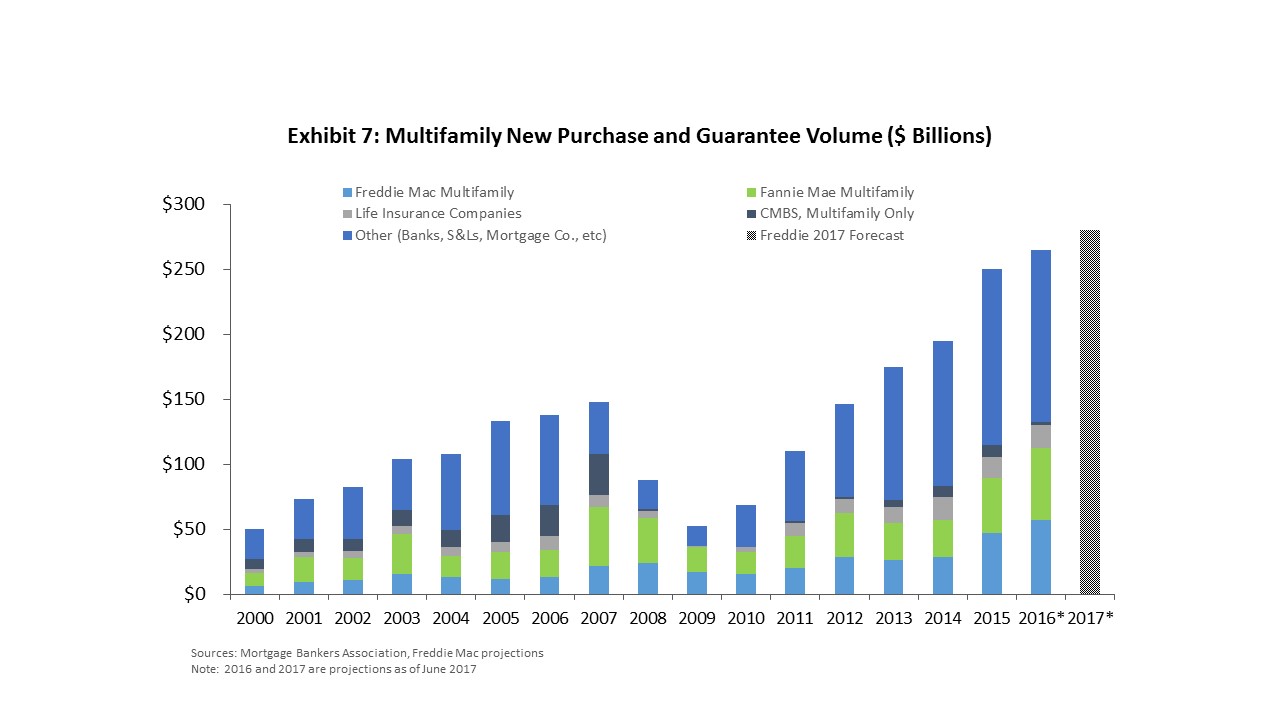 Overall, the multifamily market outlook remains positive for the rest of 2017 as the market continues to moderate. Employment growth will stay above population growth, fueling demand for housing units, while demographic and lifestyle preferences will continue to favor rental housing. New completions are expected to peak in 2017, possibly extending into the beginning of 2018, pushing vacancy rates toward historical averages but at a slower pace than forecast at the beginning of this year. Absorption of new units in some areas will take longer than in prior years, slowing rent growth. An uncertain beginning of the year led many investors to remain on the sidelines, but investor demand is expected to return. Nonetheless, we predict that origination volume will hit another record in 2017 and multifamily fundamentals will continue to perform in line with or slightly better than long-run averages at the national level.