The macroeconomic outlook remains remarkably stable. Real GDP grew 2.6 percent (SAAR) in the second quarter, but that jump in growth just compensated for the first quarter’s anemic growth. For the first half of the year, real GDP growth averaged 1.9 percent, in line both with our forecast and recent experience. The unemployment rate continues to tick down, dropping to 4.3 percent in July, the lowest rate since 2001. Despite the tight labor market, wage growth has been subdued and inflation remains surprisingly weak. In the absence of any sign of inflationary pressure, most economists expect the Fed to delay the next increase in the Federal funds rate until December. 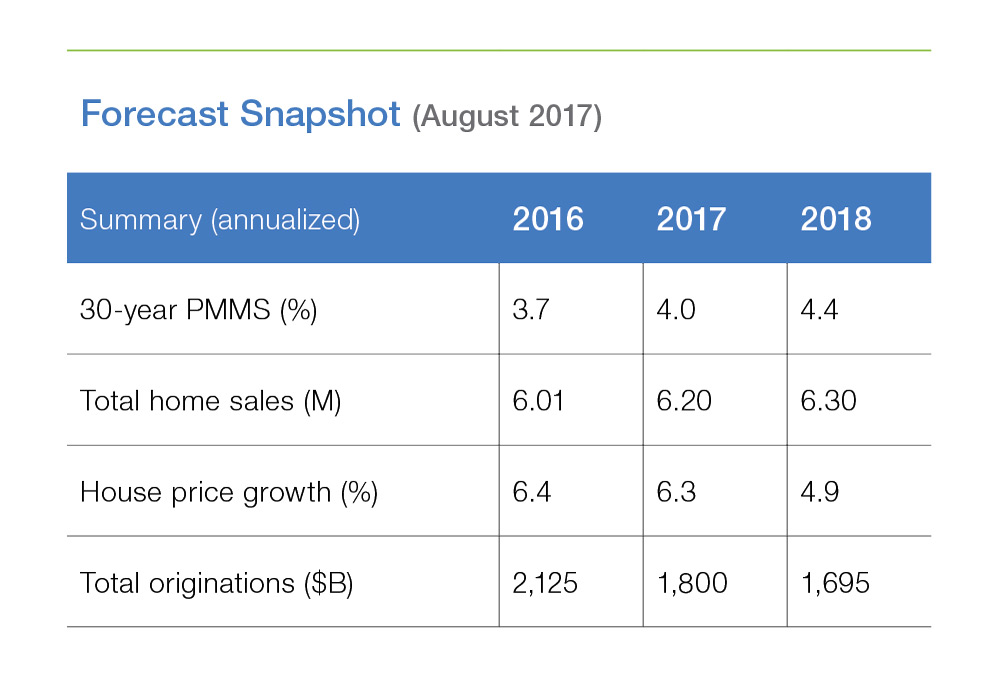 In the housing market, lack of supply continues to trump strong demand. Nationally, the inventory of houses for sale remains stubbornly below the six-month mark, and many hotter markets typically have less than two months of inventory. At the same time, mortgage rates hovering below four percent appear to put homeownership tantalizingly within reach. The clash between the irresistible force of growing demand and the immovable object of limited supply drove house prices up at annual rate of 6.9 percent in June 2017. We expect home sales to reach 6.2 million units this year, a three percent increase over the 2016 pace. However, home sales would be much higher if inventory was not so tight. 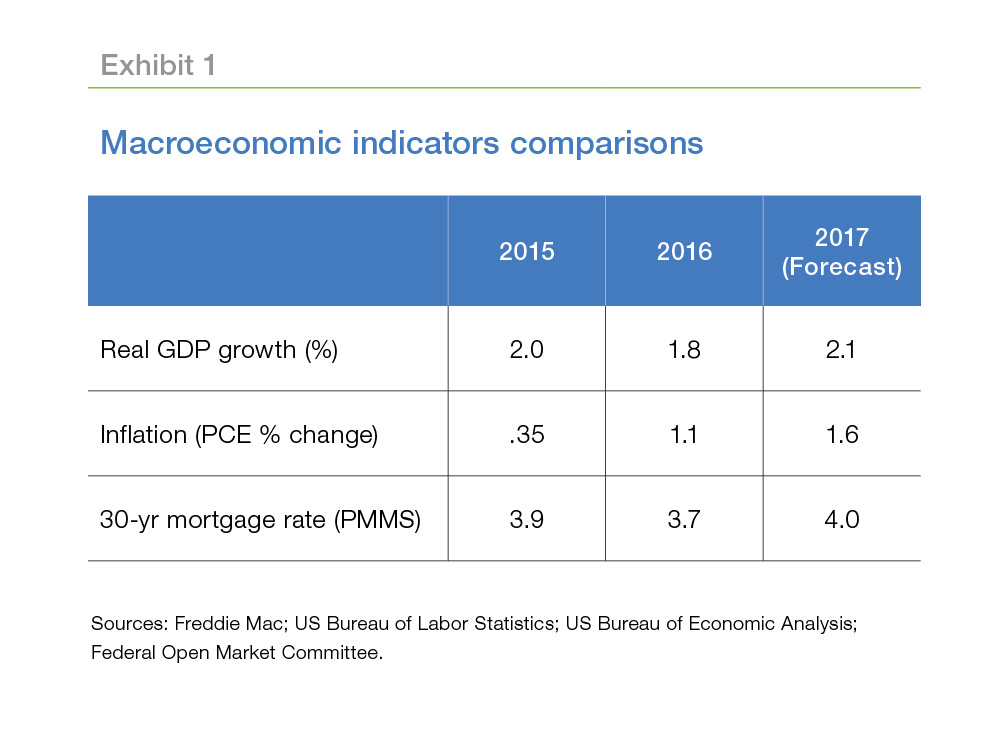 Historically about ten percent of home buyers pay cash. During the financial crisis, the combination of depressed house prices and tighter underwriting drove the share of cash sales as high as 35 percent (Exhibit 2).  House prices have recovered and mortgage markets have stabilized, however the cash share remains significantly above the historical norm. In June, cash sales accounted for around 18 percent of all home sales according to a monthly survey of realtors by the National Association of Realtors. 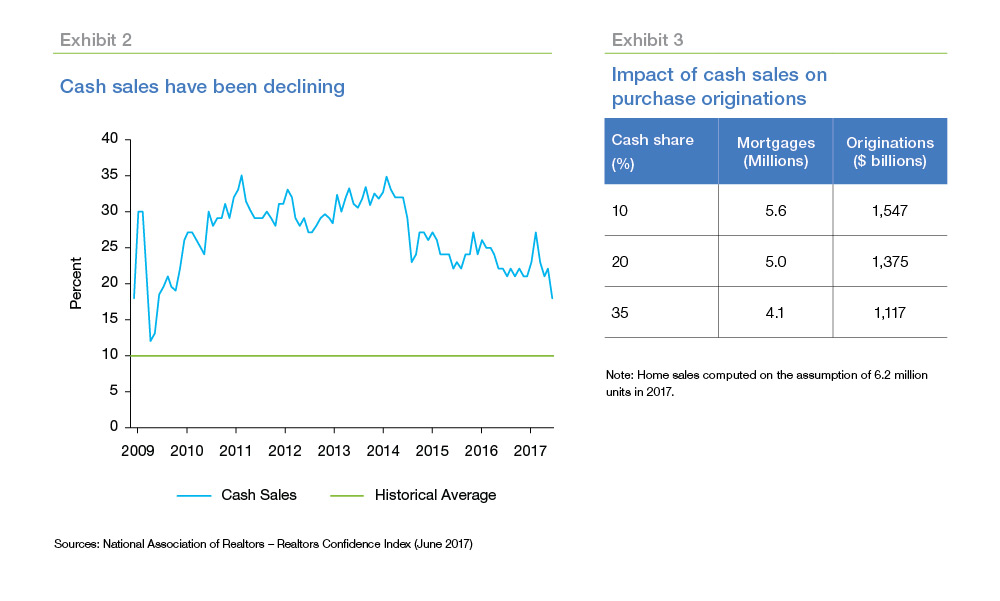 Usually, not many people like to invest a lot of cash into real estate, which is illiquid and has high transaction costs. However, in the current, highly-competitive housing market, a cash offer is an effective way to gain an advantage over other bidders. In a cash sale, the seller doesn’t have to worry about the buyer’s ability to obtain a mortgage or the chances that an appraisal will come in below the agreed sales price. Cash offers also are more common in purchases of investment property and second homes, where mortgage qualification requirements are stricter and mortgage terms are less attractive. 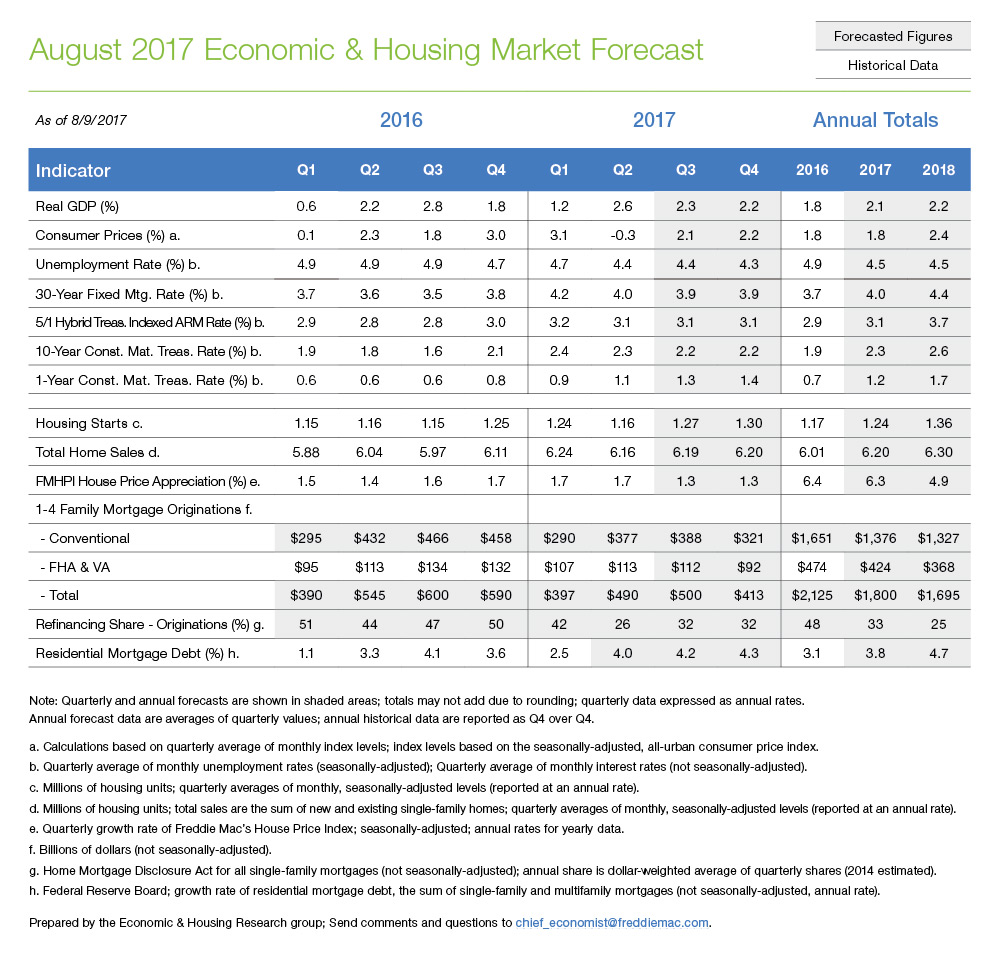