As the country recovers from the impact of hurricanes Harvey, Irma and Maria, we expect economic activity to bounce back in the longer term despite the near-term disruption. 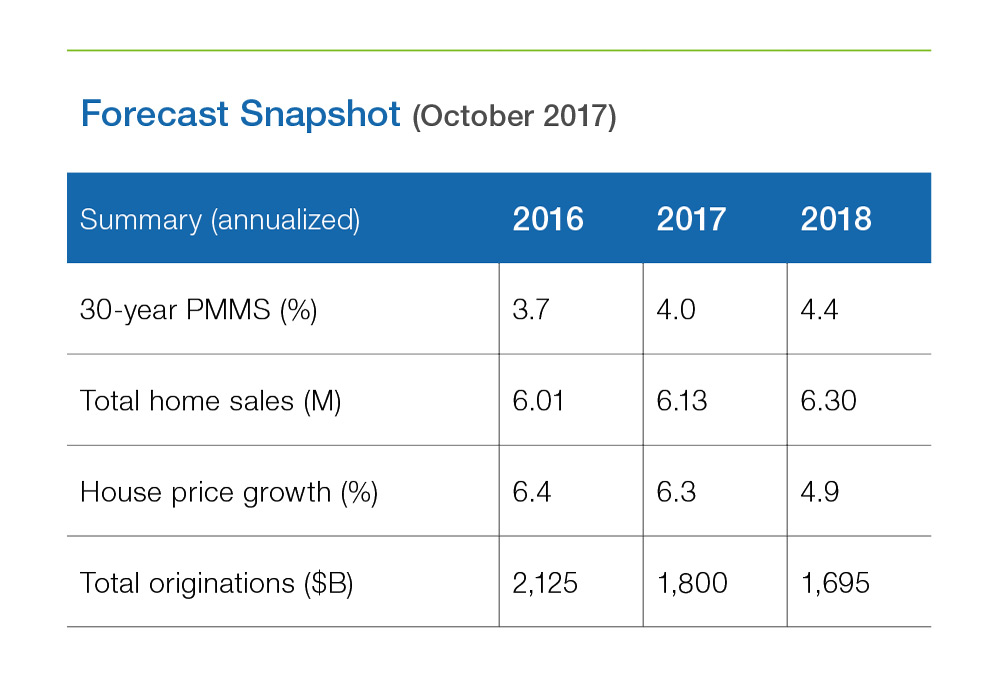 The second quarter real gross domestic product (GDP) estimate was strong at 3.1 percent. Inflation remains a sore spot with the Consumer Price Index (CPI) coming in at 1.9 percent year-over-year through August 2017. Despite losing 33,000 jobs in September, the labor market remains strong with the unemployment rate at 4.2 percent. The loss of jobs is largely attributable to a steep month-over-month decline in the leisure and hospitality industry employment, almost certainly an effect of recent storms.

The housing market remains unchanged. Home prices appreciated at a stronger-than-expected rate of 6.3 percent in July. The already tight supply of homes was exacerbated by the hurricanes, with total home sales for August at a weak 5.9 million units (SAAR). Mortgage rates continue to remain favorable. Starts and permits were a bright spot in the housing market with both numbers coming in above expectations.

Below are some of the findings based on our analysis of 2016 HMDA data:

With many homes damaged or destroyed in the aftermath of the hurricanes, there will be more pressure on the already-tight housing inventory. Per the U.S. Census Bureau’s Building Permits Survey, the counties in Texas and Florida that were included in the FEMA Hurricane Disaster Declaration accounted for about 13 percent of U.S. total housing units authorized by permits in 2016.

In our previous Outlook, we highlighted the tight market for construction labor and high development costs as two main reasons why builders are not building enough houses. Construction workers are in short supply due to a significant gap in skilled construction workers, inability to attract young workers, the opioid crisis and increased immigration enforcement. Similarly, land-use regulations have become more burdensome in the U.S., making developable land costlier. Per the NAHB’s Economic and Housing Policy, 25 percent of the price of a built-for-sale single family home is due to government regulations.

It’s likely that the housing situation will further deteriorate in Puerto Rico—which was already facing a debt crisis, population losses and infrastructure issues. On the mainland, we expect three things to happen in the housing market in the aftermath of the recent hurricanes.

1. Inventory will be tighter while house prices will see short-term growth

When Hurricane Katrina hit New Orleans in 2005, a similar amount of residential destruction occurred as in the aftermath of Hurricane Harvey. Per the Freddie Mac House Price Index (FMHPI) the annualized quarterly home price appreciation rate in New Orleans jumped from about 11 percent in the second quarter of 2005 to about 18 percent in the fourth quarter.2 The price appreciation was a result of tight inventory in the hurricane-affected areas and people looking to buy homes in dry, unaffected neighborhoods. However, in the case of New Orleans, the exodus of long-term residents altogether pushed home prices down in later years.

This time around, an early estimate shows that more than 15,500 homes were destroyed in Houston alone, and over 270,000 homes throughout the hurricane-affected areas have been damaged or destroyed. With many families in a need of relocation, we expect demand for housing to grow in nearby areas not affected by the hurricanes. If a significant number of buyers look to buy a house, then it is unlikely that there will be enough houses to keep prices steady, given that the housing market was already tight prior to the hurricane.

2. Rebuilding activity will be slow due to tight labor market

In the aftermath of hurricanes, we expect rebuilding activity to jump as homeowners who sustained damage to their properties hire contractors to make immediate fixes. However, the labor market is tight in the U.S., and the hurricane-affected markets are no exception. 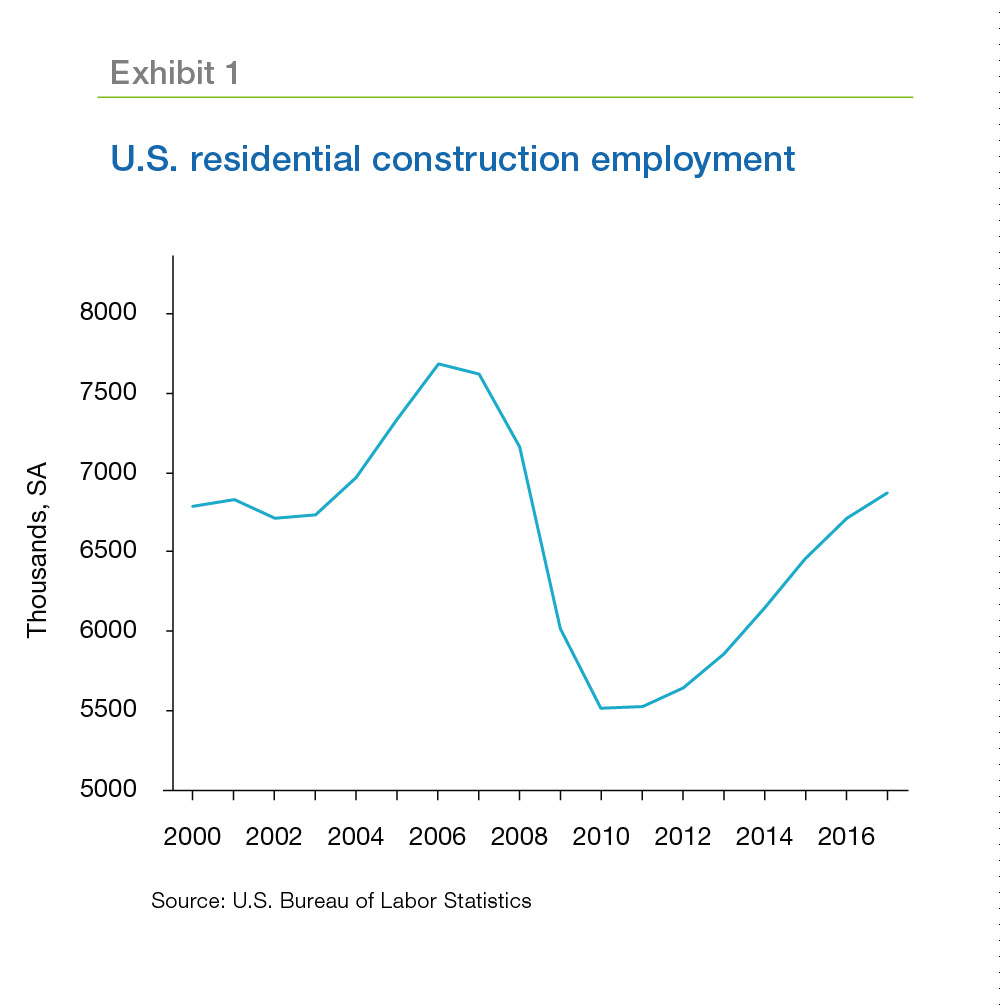 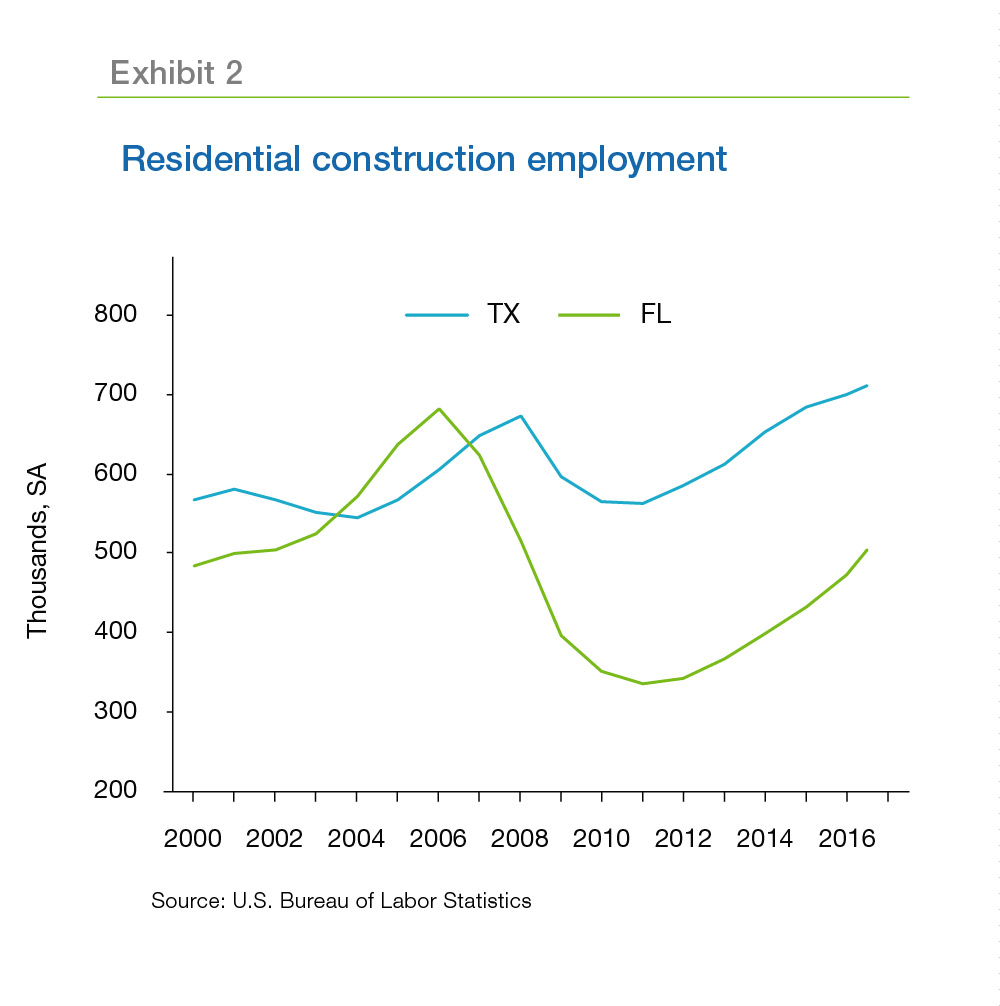 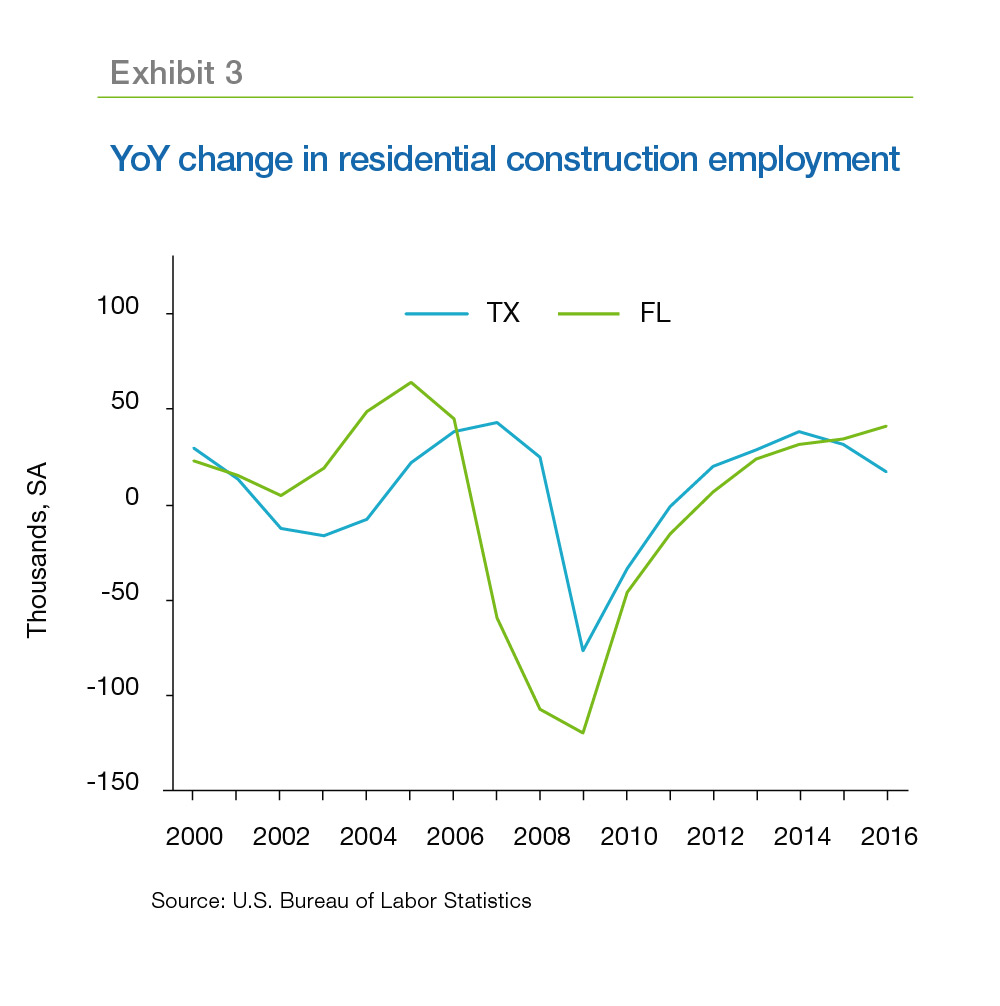 According to Black Knight, the total number of mortgaged properties in the FEMA-designated disaster areas were 1.18 million in Texas and 3.1 million in Florida. The number of properties affected in Florida was three times more than in Texas and the Irma-related disaster area included more than 90 percent of all mortgaged properties in Florida. Black Knight estimated that delinquencies could rise 16 percent in the hurricane-affected areas. As many as 300,000 borrowers could become delinquent (30 days past due), and another 160,000 could become seriously delinquent (90 days past due).

The government-sponsored enterprises (GSEs) are doing their part to help the disaster-affected homeowners. For example, Freddie Mac has suspended foreclosures and evictions in the wake of the hurricanes. Some of the other measures undertaken by Freddie Mac are:

Texas and Florida together represent 24 percent of the total housing starts in the U.S.4 Housing units impacted by the hurricanes are a fraction of the total starts in Texas and Florida, so we do not expect a huge national impact. However, the hurricanes won’t help with tight inventories. Building activities in the hurricane-affected areas may slow down as labor and capital gets drawn into rebuilding. Delinquencies in hurricane-affected areas can be expected to rise. However, with some help from the GSEs, the delinquency storm may pass without much damage. Finally, we expect the economies of Texas and Florida to bounce back. For Puerto Rico, however, it seems like recovery will be a long haul. 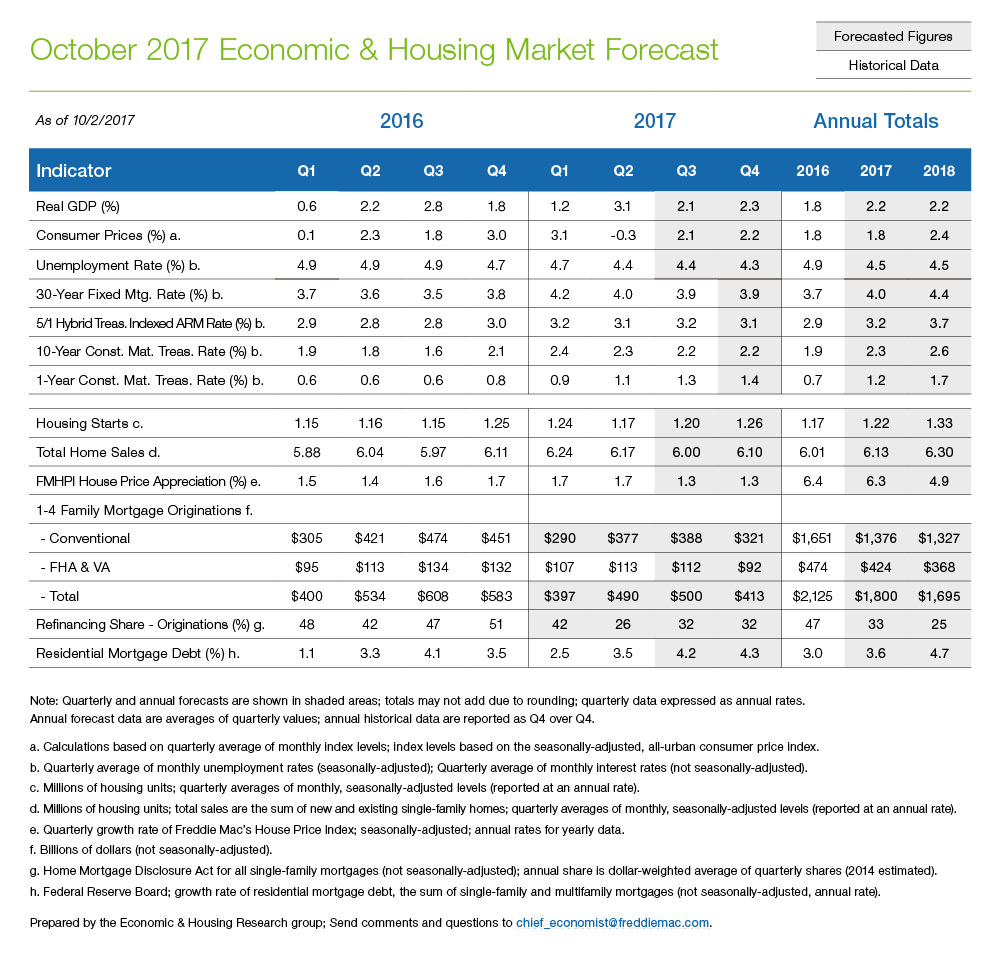 1 Less detailed data are available on the island’s real estate and vehicle stock, so property damage is aggregated into a single category.

2 The FMHPI does not include distressed sales.