U.S. economic fundamentals remain robust. Nonfarm payrolls increased 313,000 month-over-month in the latest employment report, more than 80,000 above consensus. Consumer confidence is at a 17-year high. However, mortgage rates, while still historically low, have been steadily climbing since the start of the year. As of March 15, the U.S. weekly average 30-year fixed mortgage rate was 4.44 percent, 0.49 percentage points higher than in January. Given that the economy is going strong, we expect the Federal Reserve to continue tightening and long-term interest rates to follow short-term rates higher. We forecast the 30-year fixed mortgage rate to average 4.9 percent in the fourth quarter of 2018. 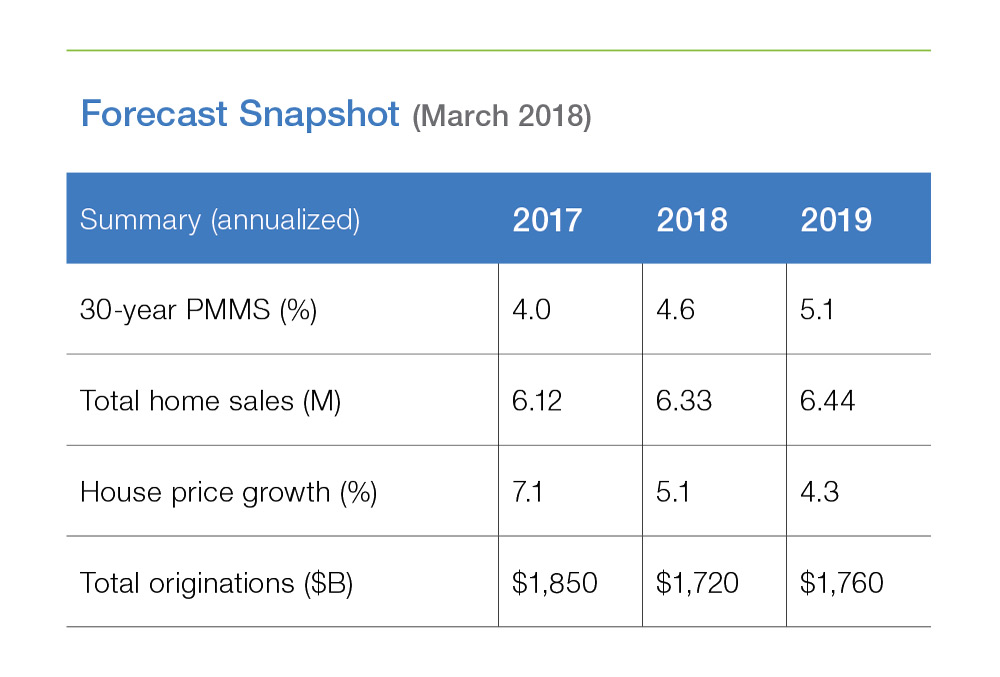 Even with higher mortgage rates, the housing market should post modest growth in 2018. Headed into the spring selling season, housing markets are a seller’s market in most of the country due to lack of inventory which is pushing house prices up. While increased home prices are helping homeowners build equity, many first-time homebuyers are pushed out of the market. Clearly, there are winners in the housing market, but for some, it’s been tough to penetrate the market. We discuss a few aspects of home price appreciation below.

Nearly two-thirds of homeowners are on a winning streak

Owning a home has been a good investment for most since the Great Recession. According to the Freddie Mac House Price Index (FMHPI), home prices have increased 37 percent nationwide on a seasonally adjusted basis since 2009. In Exhibit 2, we compare the annual percentage change in house prices by year over this expansion compared to the 1990s expansion. Homeowners are racking up record amounts of home equity; about $14.4 trillion in the fourth quarter of 2017, per the latest data from the Federal Reserve.1 According to Black Knight Data & Analytics, homeowners with mortgages have nearly $5.4 trillion in "tappable" equity.2 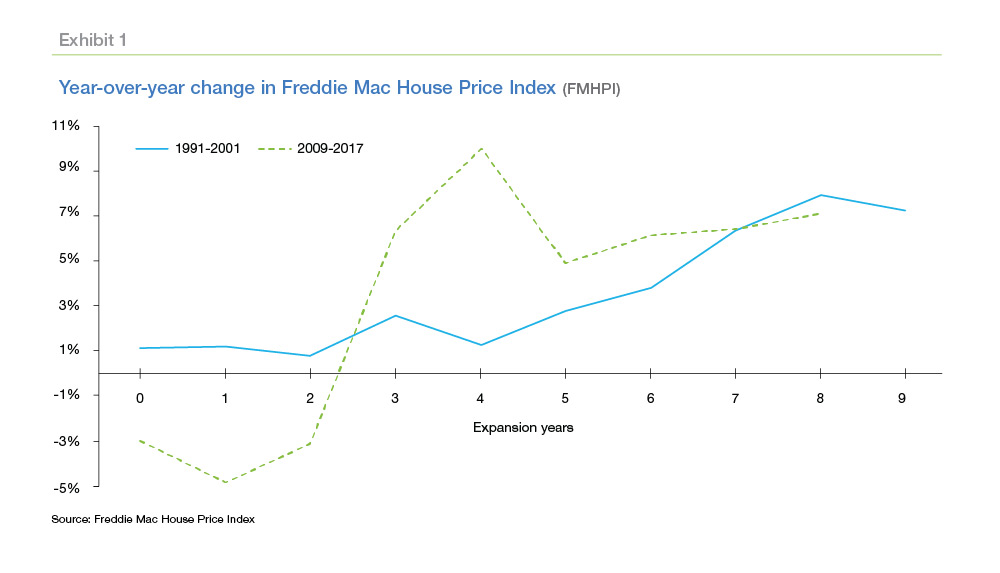 But, are all homeowners winning in the housing market?

Not all homeowners saw a significant rise in home prices

When home values grow quickly, home equity accumulates faster, helping to recoup the large upfront costs of buying a home. Following the housing crash, millions of borrowers fell underwater on their mortgages. Thanks to fast-rising home prices, the share of underwater borrowers has fallen in recent years. Exhibit 3 shows the change in share of negative equity from 2009 to 2017. 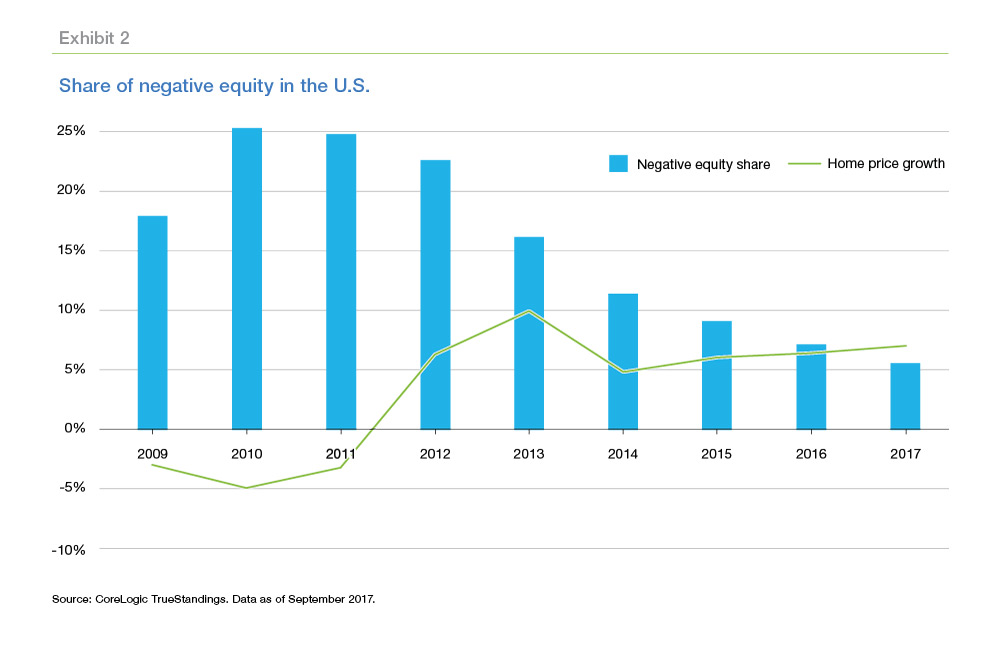 While home price trends have favored homeowners, not all homeowners saw their home values appreciate at the same rate. For example, since 2009, homeowners in California and Colorado saw a more than 60 percent increase in their home prices while homeowners in Delaware saw only a three percent increase. Similarly, a drop in the share of negative equity is disproportionately spread across the U.S., with some states still struggling. Exhibit 3 shows the change in the share of negative equity in the U.S. by state between 2009 and 2017. 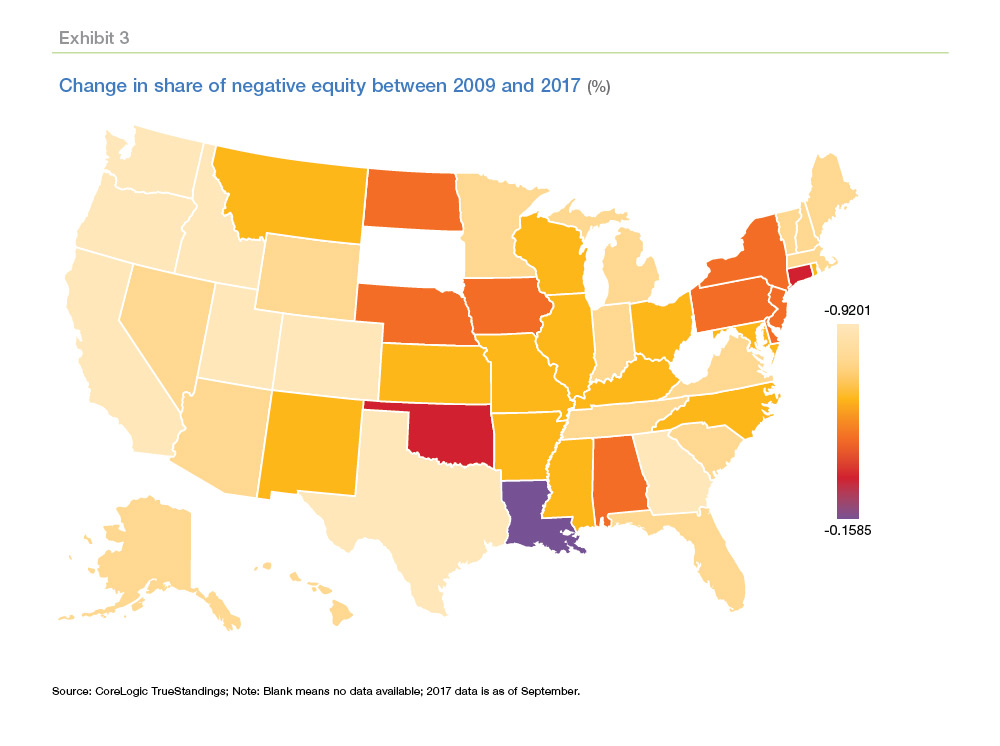 Will the winners keep up their winning streak under the new tax bill?

The new tax law has several provisions that will affect homeowners in different ways. In our February Outlook, we illustrate how the new federal income tax provisions may affect two hypothetical families who are in the market to buy a home valued at four times their income: a median-income family of three from Mississippi and a high-income family of three in New Jersey. Due to the new limit on the deduction of state and local taxes including property taxes, homeowners in states with high property taxes and high home prices will be the most negatively affected.

As we previously stated, home equity increased to $14.4 trillion in the fourth quarter of 2017 (Exhibit 4). Home Equity Lines of Credit (HELOCs) are popular means to tap into home equity. Under the previous tax law, the interest paid on HELOCs generally was deductible regardless of how the money was spent. Under the new tax law, however, the interest paid on HELOCs is no longer deductible. This is a big disadvantage for homeowners who wish to use HELOCs on other expenses, such as student debt or credit card payments. Beginning in 2018, the use of HELOCs on such expenses is considered “home equity indebtedness” and is no longer deductible. This change in the tax law could cost families thousands of dollars over the coming years.3 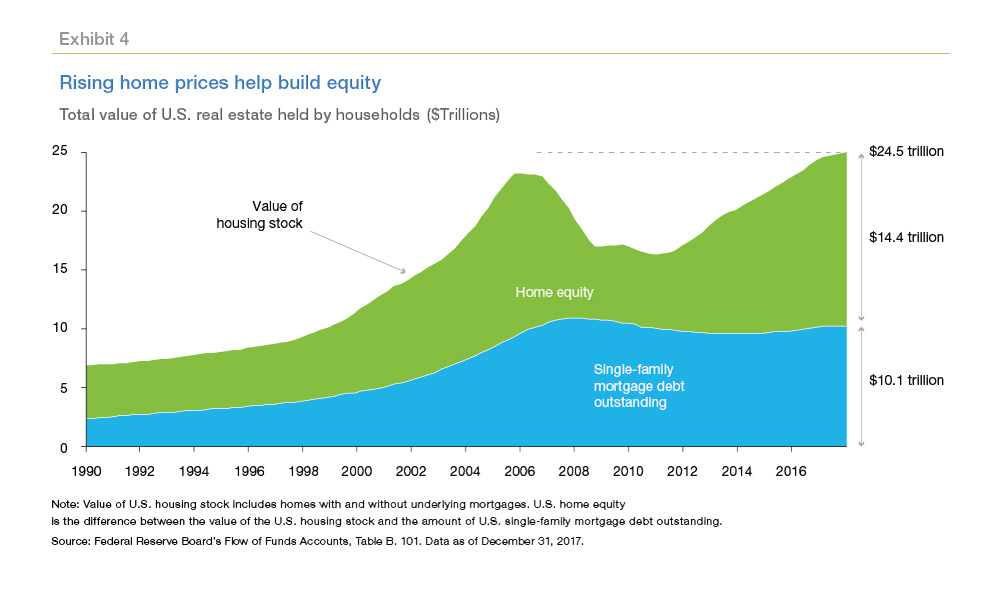 What about those who are living on fixed incomes?

Additionally, the new dollar limit in the federal tax law on mortgages qualifying for the home mortgage interest deduction may put more pressure on homeowners living on a fixed income as they may be required to pay more in federal income taxes.4

What about those who are not yet homeowners?

First-time homebuyers, who are mostly young adults, may be pushed out of the market

Lack of affordability in the housing market is already a drag on first-time homebuyers. Over the past year, home prices in the U.S. rose by more than seven percent on a national basis, pushing many first-time homebuyers out of the market. Certain individual markets saw even more house price growth.

The top ten metropolitan areas that saw the greatest gains in additional share of income needed to buy a starter home from Q4 2016 to Q4 2017 are shown in Exhibit 5. For example, Salt Lake City, UT, saw a 31 percent gain in starter home prices. With this gain, homebuyers needed an additional nine percent of income to buy a starter home in that area. Given that the median income grew only modestly in many of these markets, many first-time homebuyers were pushed out of the market. 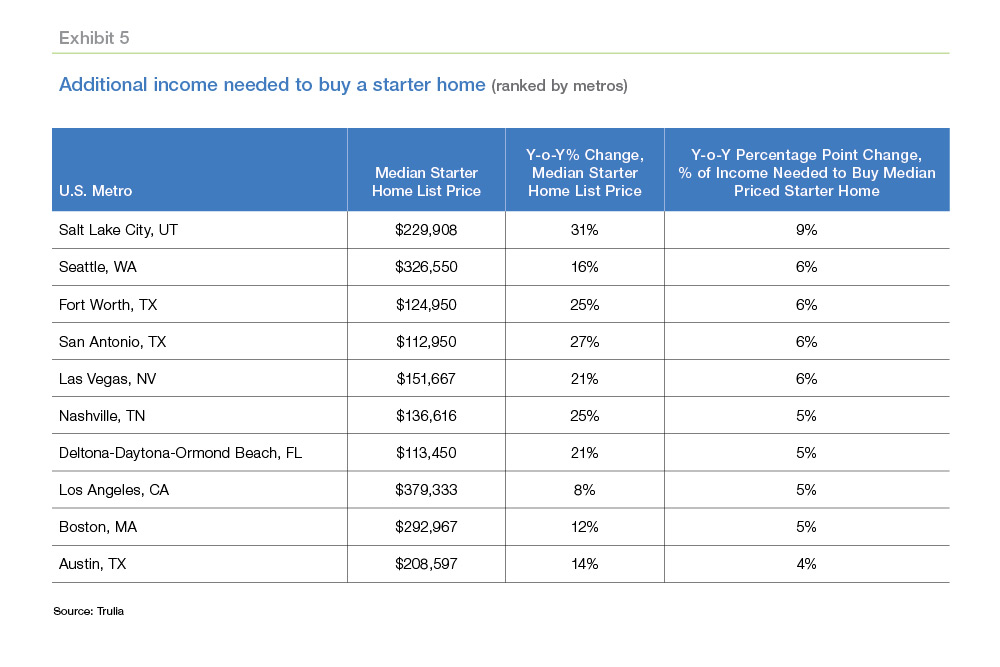 What does all this mean for the housing market?

Overall, U.S. housing markets have been on the upswing. While housing market trends have been generally favorable, not everyone has shared equally in the gains. Existing homeowners have largely seen their properties increase in value, helping to build equity. In many parts of the country, home values have more than recovered from the Great Recession, reaching new (nominal) peaks, and the share of underwater homeowners has dropped significantly. However, not every market has fully recovered. In addition, higher house prices are not universally good. They create higher property tax obligations, which can be a challenge for homeowners with fixed incomes, and they make it more difficult for potential first-time buyers to enter the market. With construction ramping up slowly to meet housing demand, home prices are likely to continue rising above the rate of inflation, which would further widen the gap between housing market winners and losers. 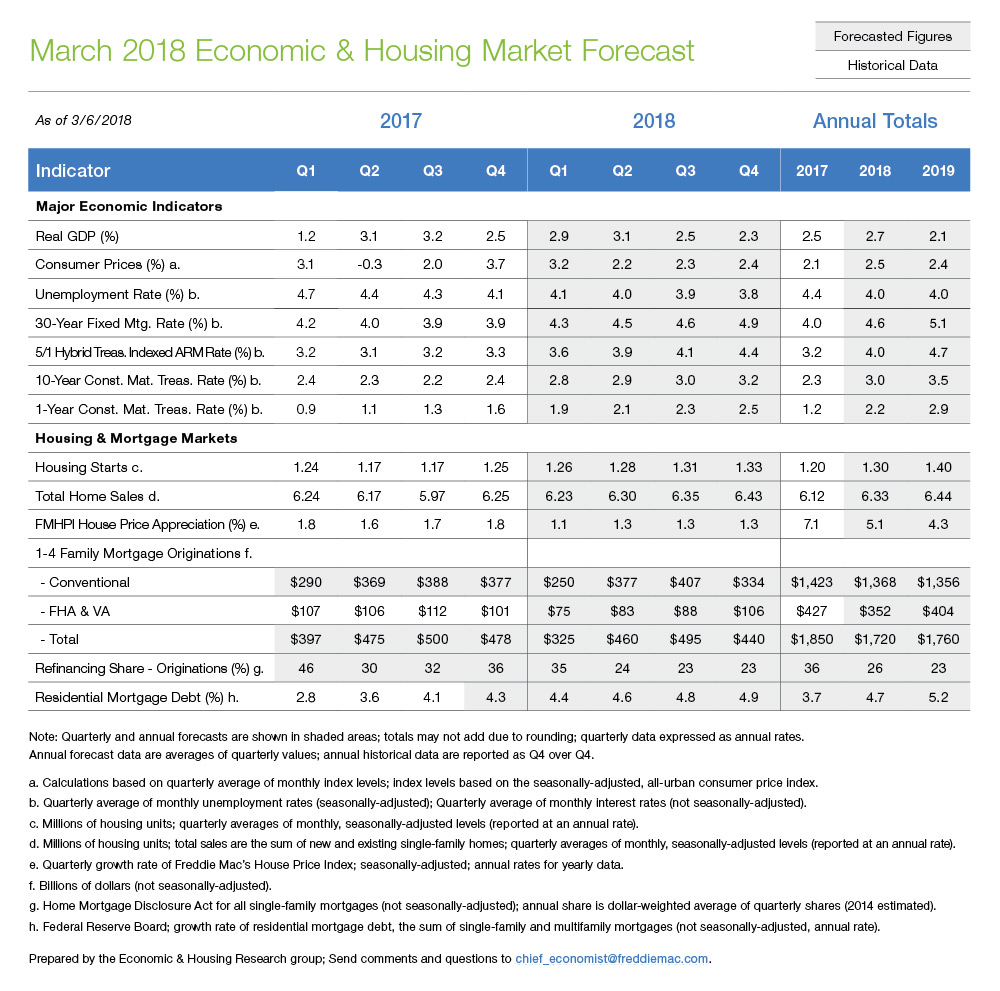 1 For a discussion about how rising homeowner equity affects consumer spending, see Aladangady, Aditya, and Laura Feiveson (2018). “A Not-So-Great Recovery in Consumption: What is holding back household spending?”, FEDS Notes. Washington: Board of Governors of the Federal Reserve System, March 8, 2018, https://doi.org/10.17016/2380-7172.2159.

3 Taxpayers that already have HELOCs outstanding also will be subject to the new deduction limitations; the new tax law does not grandfather the deduction of interest for existing HELOCs.