As the year-end approaches, we look ahead to 2019 and what are likely to be the dominant economic trends in the new year. The effects of fiscal stimulus will wane while the Federal Reserve is likely to continue tightening monetary policy causing economic growth to cool. We anticipate that mortgage rates will continue to rise, putting downward pressure on homebuying activity. 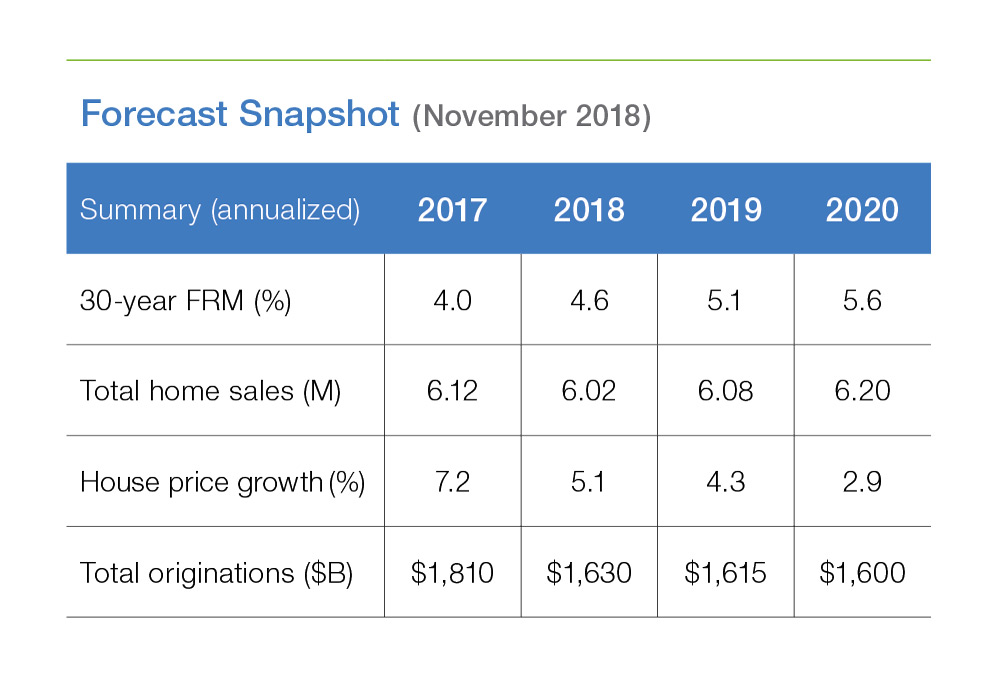 The biggest unknown about the housing market next year is whether the recent negative trends will persist or the market will adjust to the shock of higher mortgage rates and resume modest growth. Our forecast favors the latter – modest growth. Here's why.

Third quarter GDP growth came in stronger than expected at 3.5 percent, down 0.7 percent from the previous quarter. This robust growth is due in part to a 4 percent increase in consumer spending and a 3.3 percent increase in government spending. We expect GDP growth to average 3 percent in 2018 before slowing to 2.4 percent in 2019 and 1.8 percent in 2020. We do not expect our baseline forecast to be affected following the midterm elections. With split-party control of the U.S. House of Representatives and U.S. Senate, we don't anticipate any major changes to the course of federal spending under current law, which is likely to boost growth in 2019, and then start to drag on growth in 2020.

The labor market continues to be the strong point of the economy. The unemployment rate held at a multi-decade low of 3.7 percent in October. Initial jobless claims also remained at record-lows, falling nearly 0.5 percent to 214,000 in the first week of November. The 4-week moving average for continuing jobless claims hit another 45-year low, falling 0.5 percent to 1.63 million in late October. Despite consistently strong job growth, wage growth has accelerated only modestly. Average hourly earnings grew just 0.2 percent in October but remain up 3.1 percent year over year. We forecast unemployment to average 3.9 percent this year, then dropping to 3.6 percent in 2019 before increasing to a more sustainable long-term rate of 4 percent in 2020.

Mortgage rates are on the rise 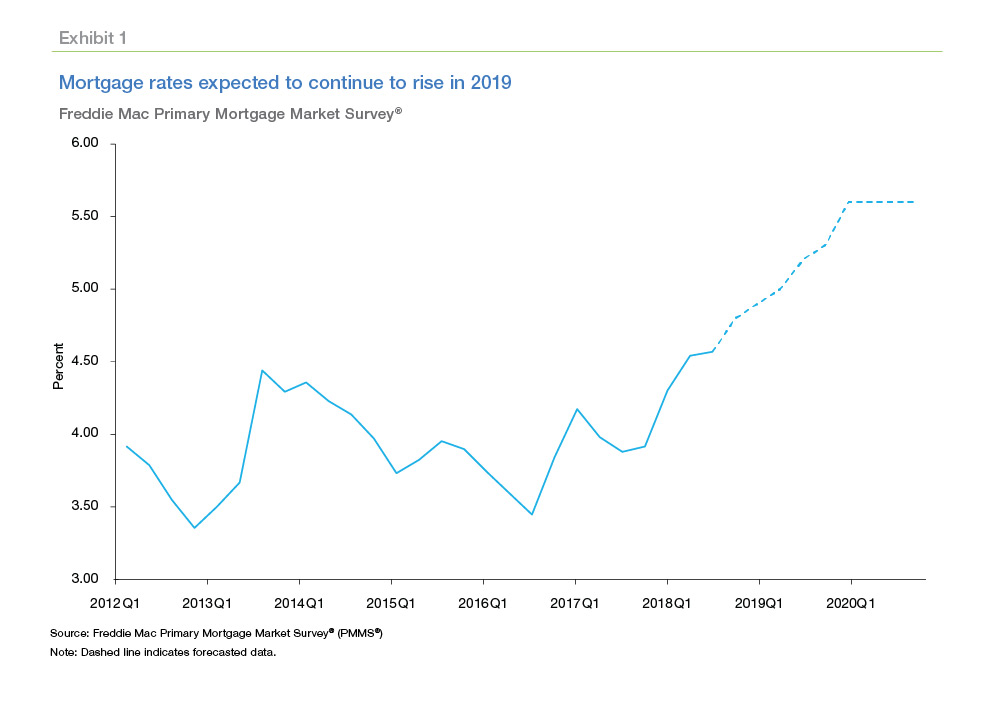 Almost all the trends in the U.S. housing market have been negative in recent months as housing market activity continues to adjust to higher mortgage rates. Housing starts decreased 5.3 percent to 1.2 million in September with the biggest drivers being the hurricane-affected South and the Midwest. Given the persistence of recent negative trends in construction, we have revised our forecast for 2018 housing starts down 30,000 units to 1.26 million units and our 2019 forecast down 50,000 units to 1.30 million units. By 2020, housing starts are forecasted to climb to 1.4 million units.

Total home sales fell 3.3 percent to 5.85 million in the third quarter of 2018. Existing single-family home sales fell 3.4 percent to 5.15 million in September, the lowest rate since 2015. New home sales also fell 5.5 percent to 553,000 in September, and both August and July sales were revised down 6.9 percent and 0.8 percent, respectively. The number of new homes available for sale is up 16.8 percent since this time last year, indicating that new home buyers may have been exhausted by the relentless march higher of home prices. 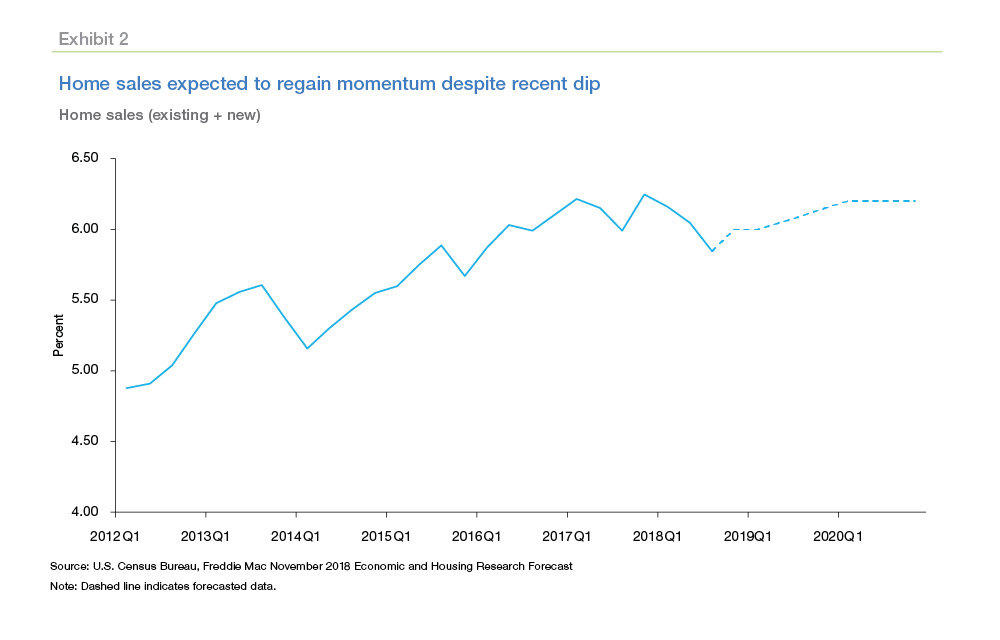 If new home sales are to resume growth in 2019, builders may have to shift their focus to more modestly priced homes and smaller sized homes to help offset housing affordability concerns. But with cost pressures pinching profitability, this will be a significant challenge. One glimmer of hope can be found in modest expansions in the share of modular and other non-site build housing which could play a role in helping to expand the construction of affordable single-family housing.

The growth rate of the Freddie Mac House Price Index remained flat at 0.9 percent in the third quarter of 2018. We forecast that home prices will increase 5.1 percent in 2018 with the rate of growth moderating to 4.3 percent and 2.9 percent in 2019 and 2020, respectively. 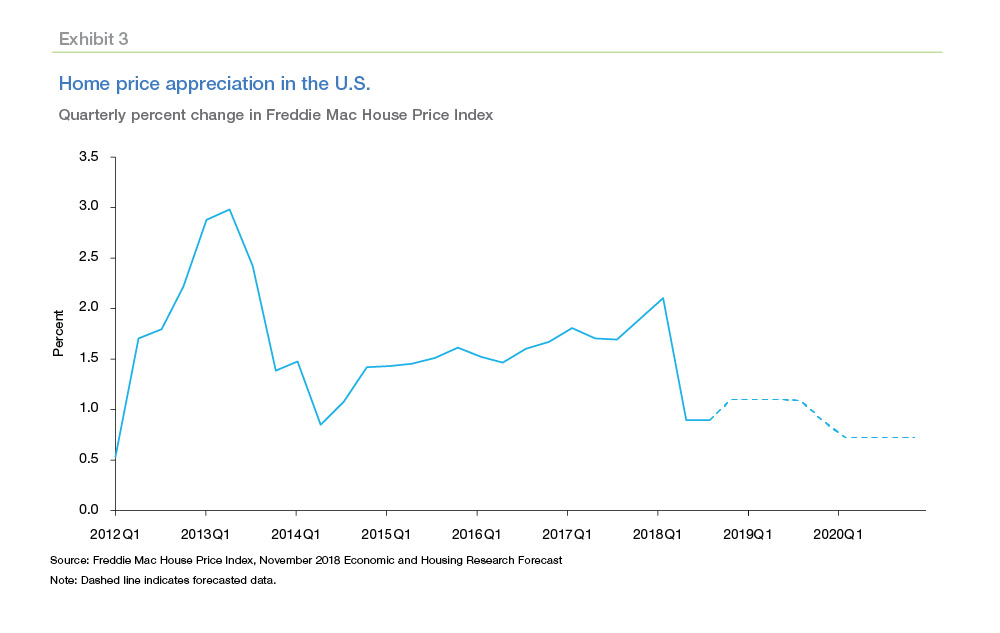 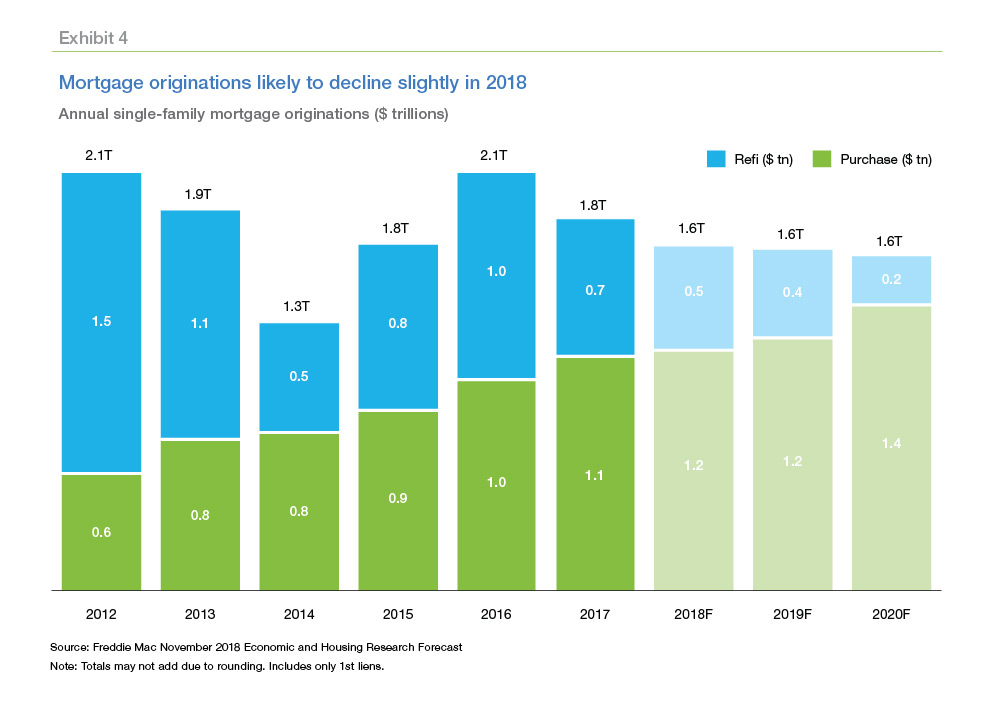 While the share of cash-out refinances is at its highest since the third quarter of 2008, the total volume of cash-out activity remains much lower in the last decade. Adjusted for inflation in 2017 dollars, an estimated $14.2 billion in net home equity was cashed out during the refinance of conventional prime-credit home mortgages in the third quarter of 2018, down from $18.3 billion a year earlier and substantially less than the peak cash-out refinance volume of $102 billion during the second quarter of 2006.

Borrowers who refinanced their first lien mortgage in the third quarter of 2018 either kept the same interest rate or took slightly higher rates on average, compared with an interest rate drop of almost 0.7 percent rate a year earlier and much lower than the almost 1.9 percent reduction during the second quarter of 2013. Many of the refinances during the third quarter of 2018 were not for rate reduction, but rather for cashing out equity to consolidate higher interest debt, pay other bills or for home improvements. More than 95 percent of refinancing borrowers chose a fixed-rate loan, regardless of what the original loan product had been. 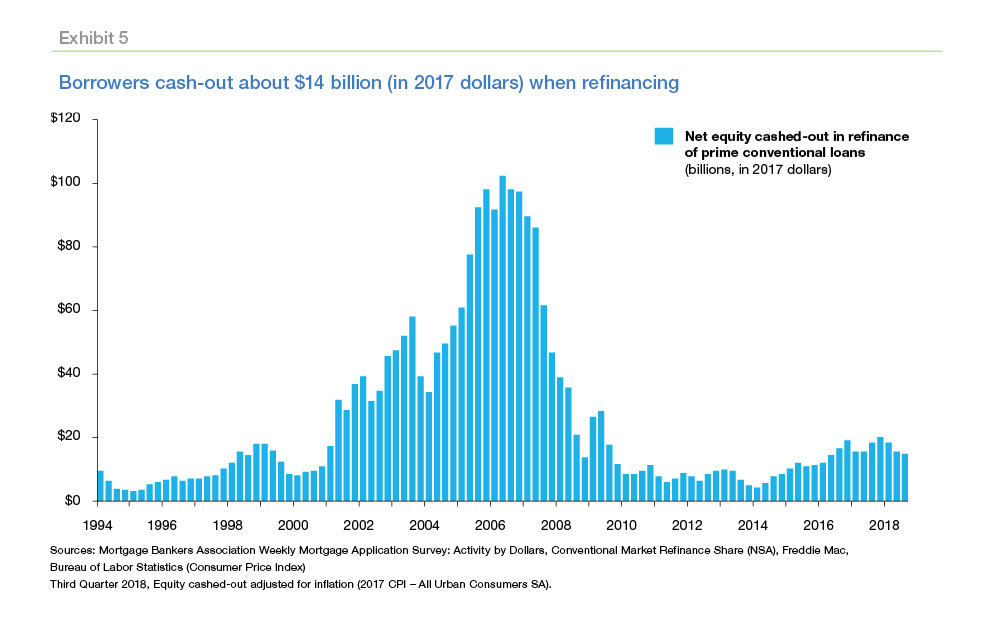