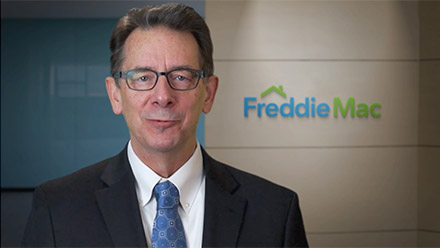 According to the common wisdom, Baby Boomers — like Peter Pan — refuse to grow older. Instead of retiring, they launch second — and third — careers. Instead of moving to seniors-oriented communities, they "age-in-place" or, even better, move into the heart of a walkable city. Human interest stories in the Sunday papers claim that 70 is the new 40 and 60 still has bad skin and trouble talking to girls. These clichés make great copy, but how accurate are they? In place of rigorous research, I offer one personal observation.

In grade school, I played trombone in the school band. At Christmas, the trumpets, trombones, and sousaphones formed a brass choir and performed Christmas carols at schools and senior centers. I vividly remember performing for the Fun After Fifty club, a popular social group for seniors. Yes, "after fifty," you were officially a senior, but you were still allowed to have "fun."

Now that I am (slightly) north of 55, I decided to check the current status of the Fun After Fifty clubs. The Fun After Fifty Wikispace has been deactivated—it has been inactive for an extended period of time. The Fun After Fifty chapter in my hometown still has an active web site, but a post from last October says "It looks like the club is dying for lack of people willing to serve." It seems like you have to be a lot older these days to be a senior citizen.

The importance of the 55+ population

Individuals older than 54 comprise a little over a quarter of the population (Exhibit 1) of the U.S., but they control roughly two-thirds of the equity in single-family homes. And, for most of these households, their home is their largest asset. Many of the 55+ purchased homes during a sustained boom in house prices, notwithstanding the house price roller coaster of the last ten years. Today’s 65-year-old who bought the “average” house at age 30 has seen the value of that house increase 3.7 times. Assuming a 20 percent down payment, a reasonable number of refinances to take advantage of declining mortgage rates, and the impact of the mortgage interest tax deduction, the rate of return on this investment is hard to beat. For many older folks, these literally are the golden years. 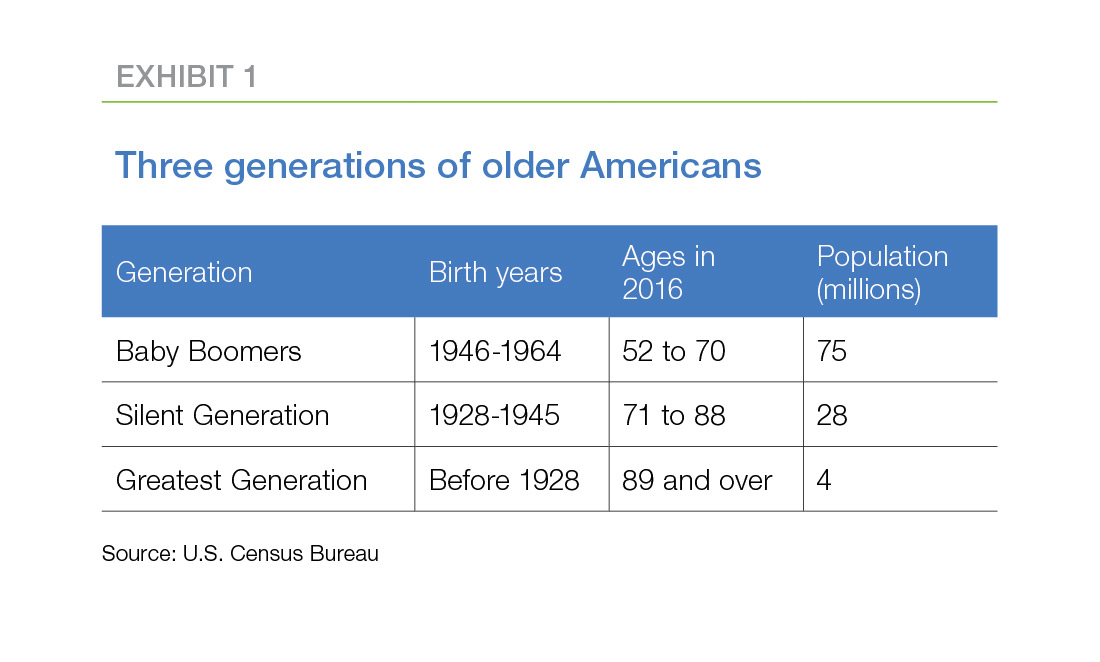 Their numbers and their housing wealth guarantee that the housing decisions of older homeowners will play an outsized role in shaping the housing opportunities available to the generations that follow them — Gen X and the massive Millennial generation. And the influence of the 55+ population will last a long time (Exhibit 2). Today’s 65-year-old can expect to live until age 84 on average. In contrast, the life expectancy of the Greatest Generation — those born between 1900 and 1924 — was 47 years. 1 With a longer life span and ample wealth, many older homeowners may buy and sell several more homes before they’re done.

First, the 55+ population is noticeably less diverse than younger generations (Exhibit 3), reflecting the relatively-slower growth of the white, non-Hispanic population compared to other demographic groups in recent years.

Older Americans are staying in the labor force longer than they used to (Exhibit 4). After bottoming out in the mid-1990s, the labor force participation rate of the 55+ population has been increasing. Two factors may contribute to this increase in labor force participation. First, older Americans are staying healthy longer. In addition, some of the 55+ are working longer to provide adequately for their longer life expectancy.

Preferences and intentions of the 55+

This article reviews the results of the first installment of our survey with an emphasis on homeowners and potential homeowners. The survey participants also include a representative share of renters. Freddie Mac Multifamily has a separate review of the attitudes of the renters in this same age group.

Our survey explored the intentions of the 55+ about their housing choices. Their answers allow us to separate the facts about this group from the myths that sometimes appear in the press.

Perhaps the most common opinion about older homeowners is that they want to age-in-place. And, in fact, almost two-thirds of the homeowners in our survey want to stay in their current residence (Exhibit 7). Moreover, the majority are very satisfied with both their communities and their homes (Exhibit 8).

However, many older Americans may face financial challenges retrofitting their current residences to accommodate their needs as they continue to age. Almost a quarter of the respondents indicated they will need major renovations in order to stay in their current home for the rest of their lives (Exhibit 9). And other studies indicate the remainder of our respondents may be underestimating the need for retrofitting. 2

Among those who anticipate major renovations, almost half expressed concerns about their ability to afford those renovations (Exhibit 10). 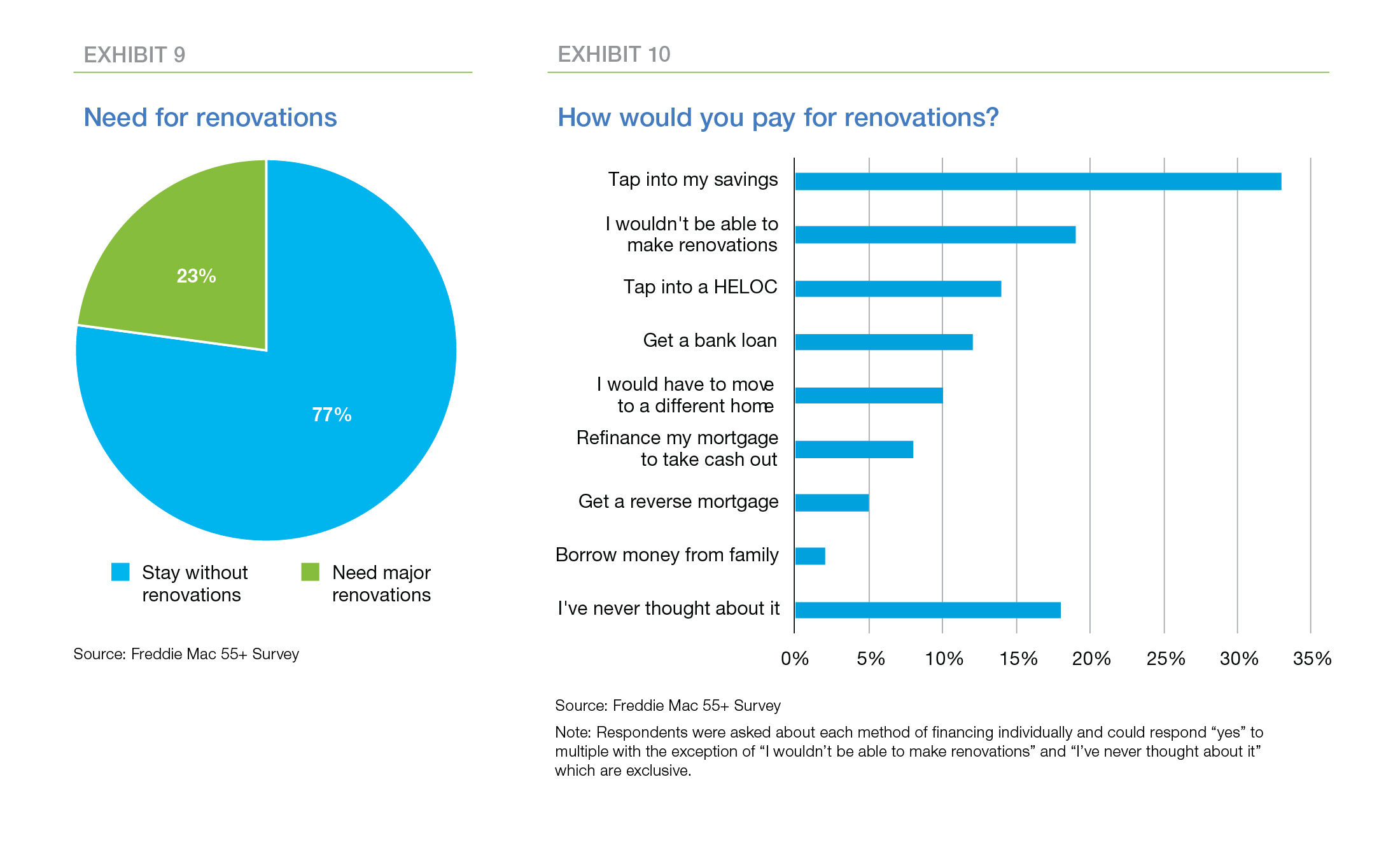 A significant share of our sample intends to age-in-place, but in a different place from their current residence. And for many of them, that different place will be another house (Exhibit 11). Almost three-quarters of the respondents who plan to move again say they are more likely to buy a house rather than rent. That suggests roughly 18 million 55+ homeowners may be shopping for another house in the next few years. 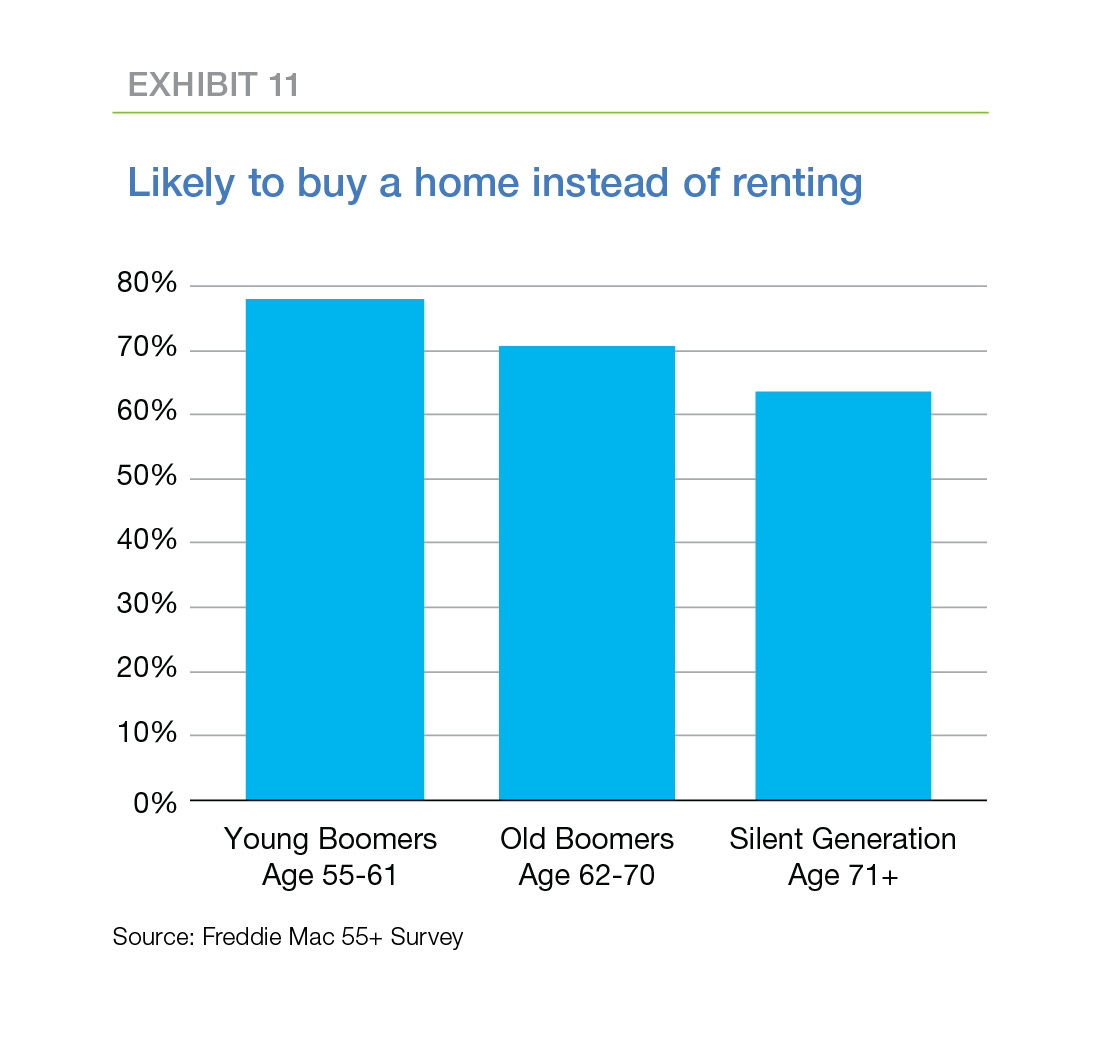 Relatively few older homeowners think it is very important to downsize in their next move (Exhibit 12).

In fact, the most important characteristics of the next residence, in order, are the affordability of the community, the amenities needed for retirement, and less maintenance. Proximity to other family members ranks fourth in the top 10, and downsizing is only eighth (Exhibit 13).

Our survey also posed questions designed to gauge the perspective of older Americans on their financial well-being. For the most part, respondents feel financially secure and happy with their housing situation. Over three quarters of homeowners in our survey say they are very or somewhat confident that they will have a financially comfortable retirement. Renters are substantially less confident with just under half responding they are very or somewhat confident of a financially comfortable retirement.

Is the mortgage paid off?

A casual survey of the business section of the Sunday paper suggests that the single-most-common piece of financial advice offered to older Americans is to pay off their mortgages prior to retirement. It turns out that a lot of older homeowners haven’t been listening. More than a third still have a mortgage, and a majority of those with a mortgage have more than ten years left until their loan is paid off. 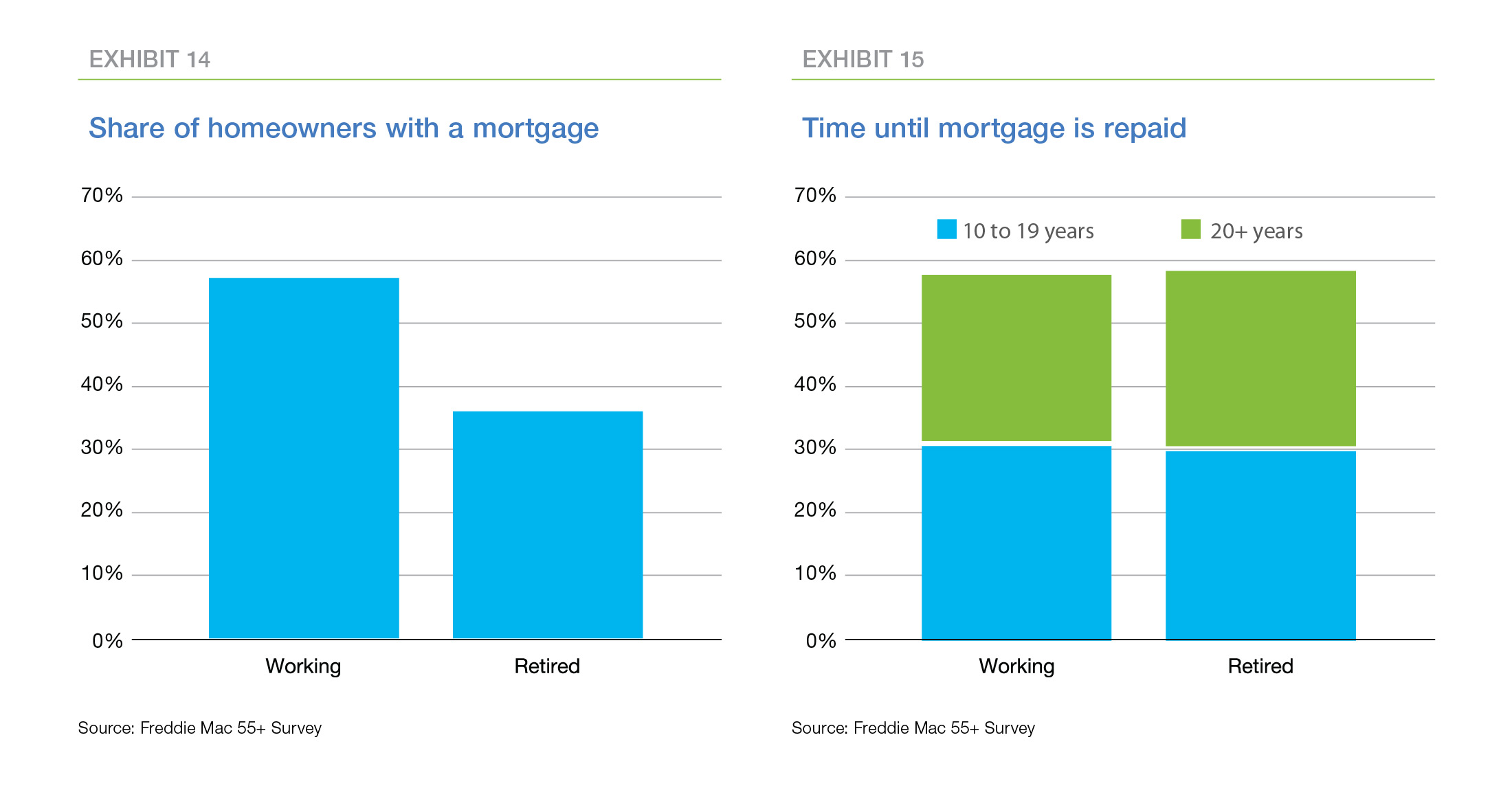 The perspective on the affordability of retirement splits between the still-working older homeowners and the already-retired. Only one-fifth of the still-working home owning population are very confident they will have a financially-comfortable retirement, while over a third of the already-retired strongly agree they are financially secure. Not surprisingly, confidence among both groups increases with income. And when the “somewhat confident” and “somewhat agree” groups are included, the picture looks rosier—well over half of each group expresses confidence regardless of income. 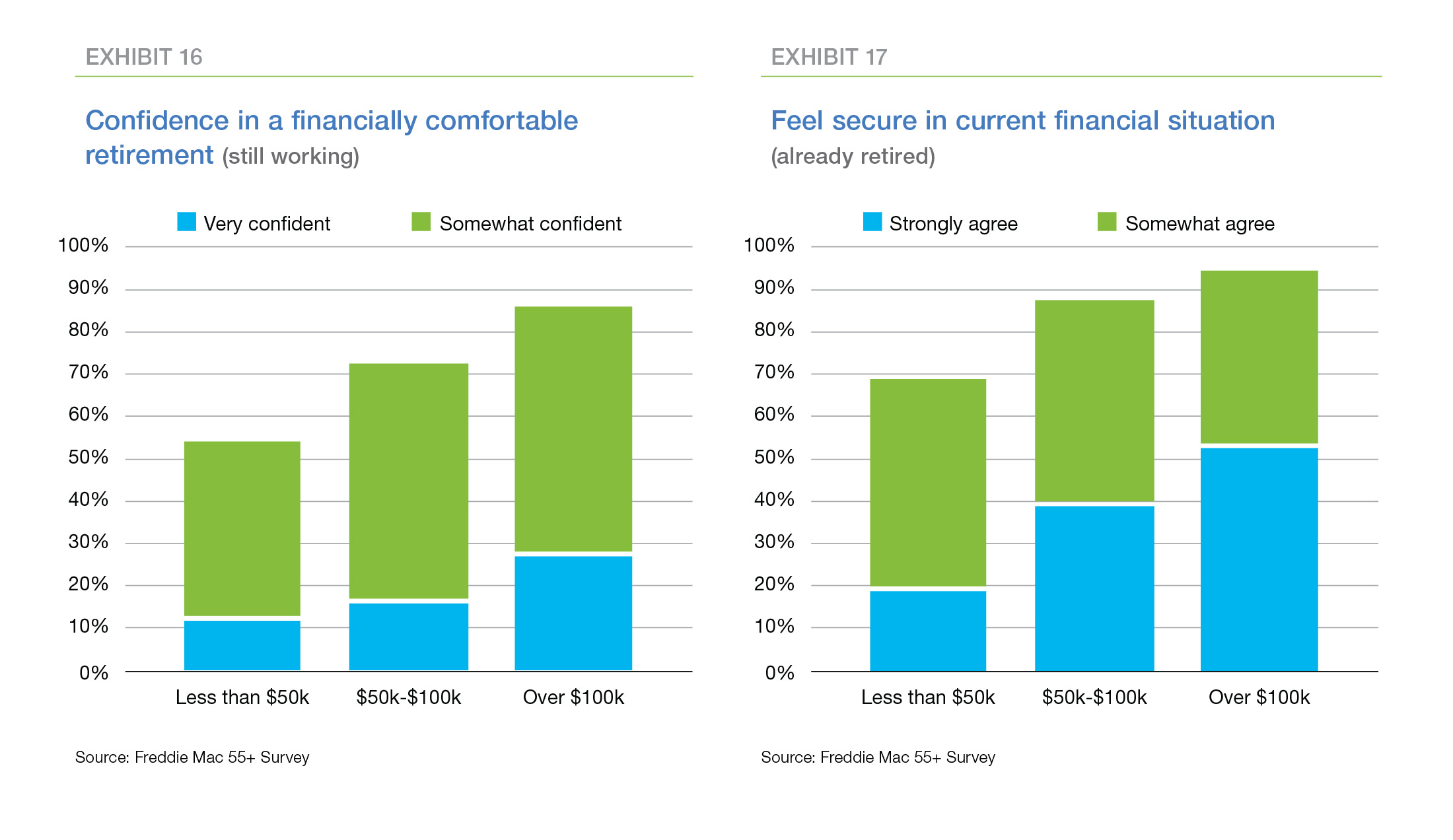 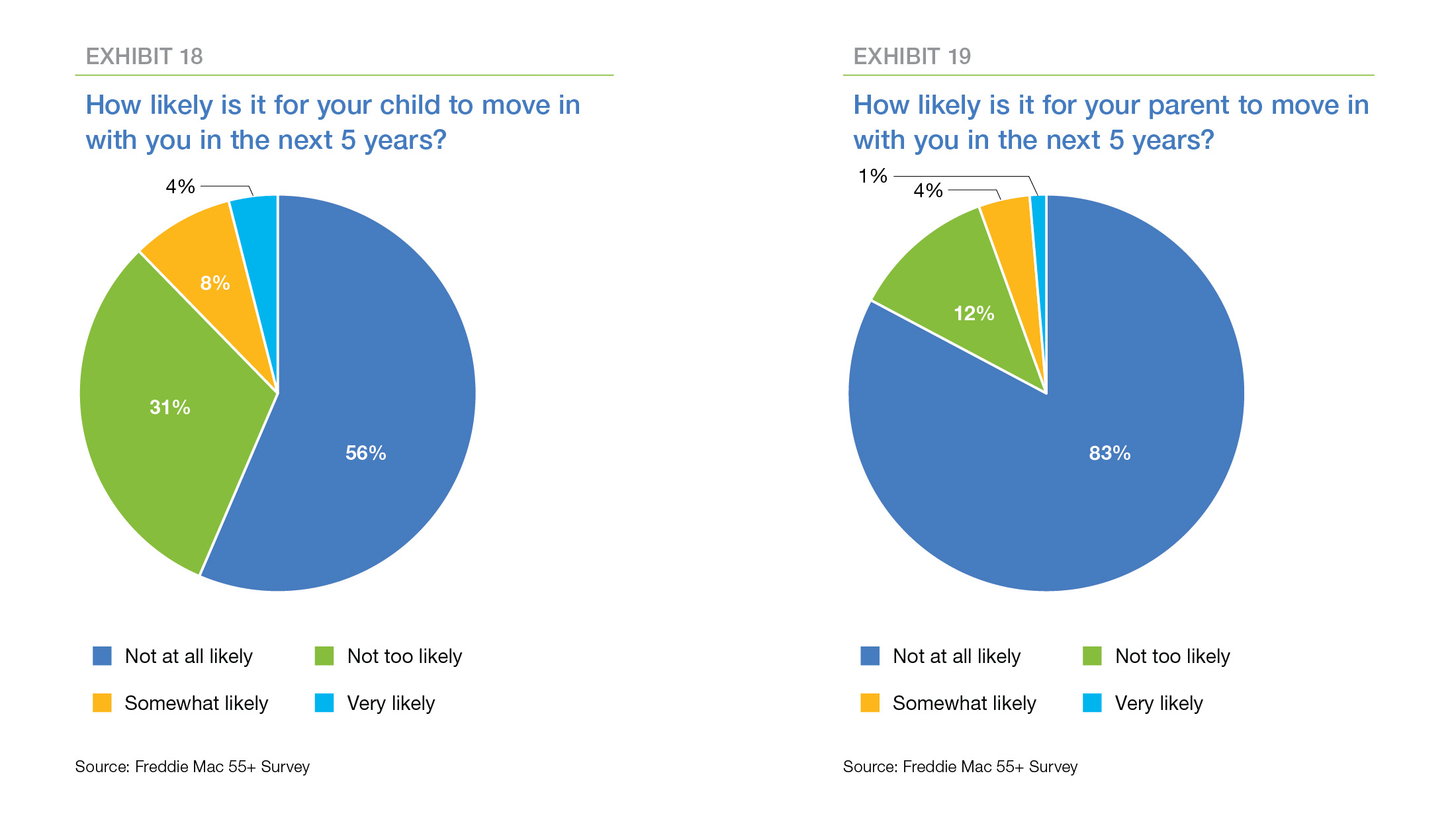 One of the surprises in the survey is the unexpectedly-small share of respondents who have provided—or expect to provide—down payment assistance to their children (Exhibit 20). In addition, relatively few reported receiving such assistance from their own parents. In fact, 15 percent of respondents indicated that they are unwilling to provide financial assistance although they are financially able to do so. 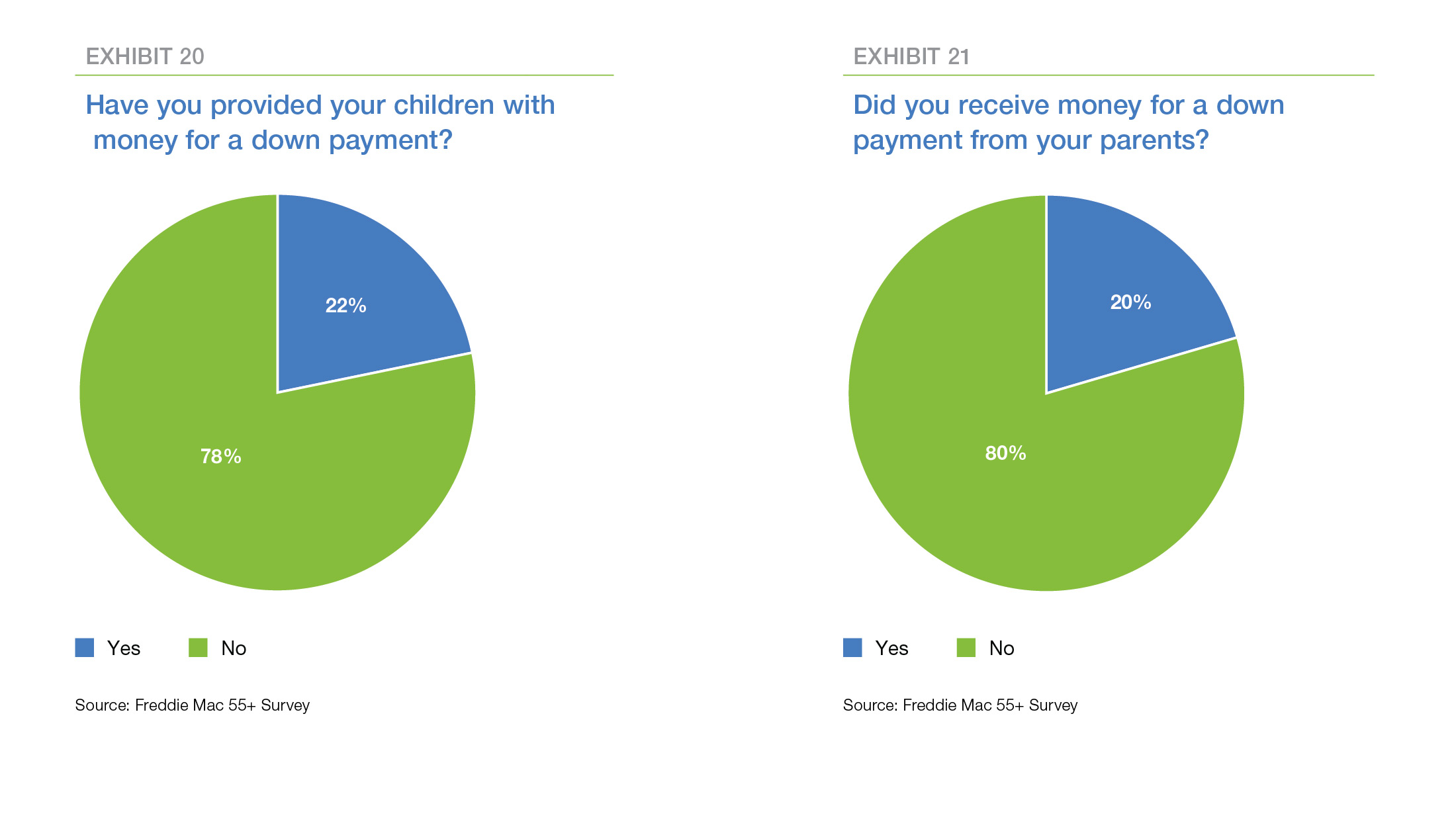 The Fun After Fifty clubs are fading away because a 50th birthday no longer marks the beginning of “old age” as we commonly understand it. Many commentators have noted that Millennials appear to be “aging” more slowly than previous generations, that is, taking longer to settle into jobs, get married and start families, and buy houses. Similarly, the current 55+ population is aging more slowly than previous generations of older Americans. They are staying healthy and active longer, working longer, and buying homes later in life.

The table below (Exhibit 22), taken from the NAHB study, lists the top eight community amenity preferences for four generations: Millennials, Gen X, Baby Boomers, and Seniors (older than Boomers). The results are striking. Millennials and Gen Xers want playgrounds in their neighborhoods. Boomers and Seniors want outdoor maintenance service. The remaining amenities are identical across all four generations (although the order changes a bit). 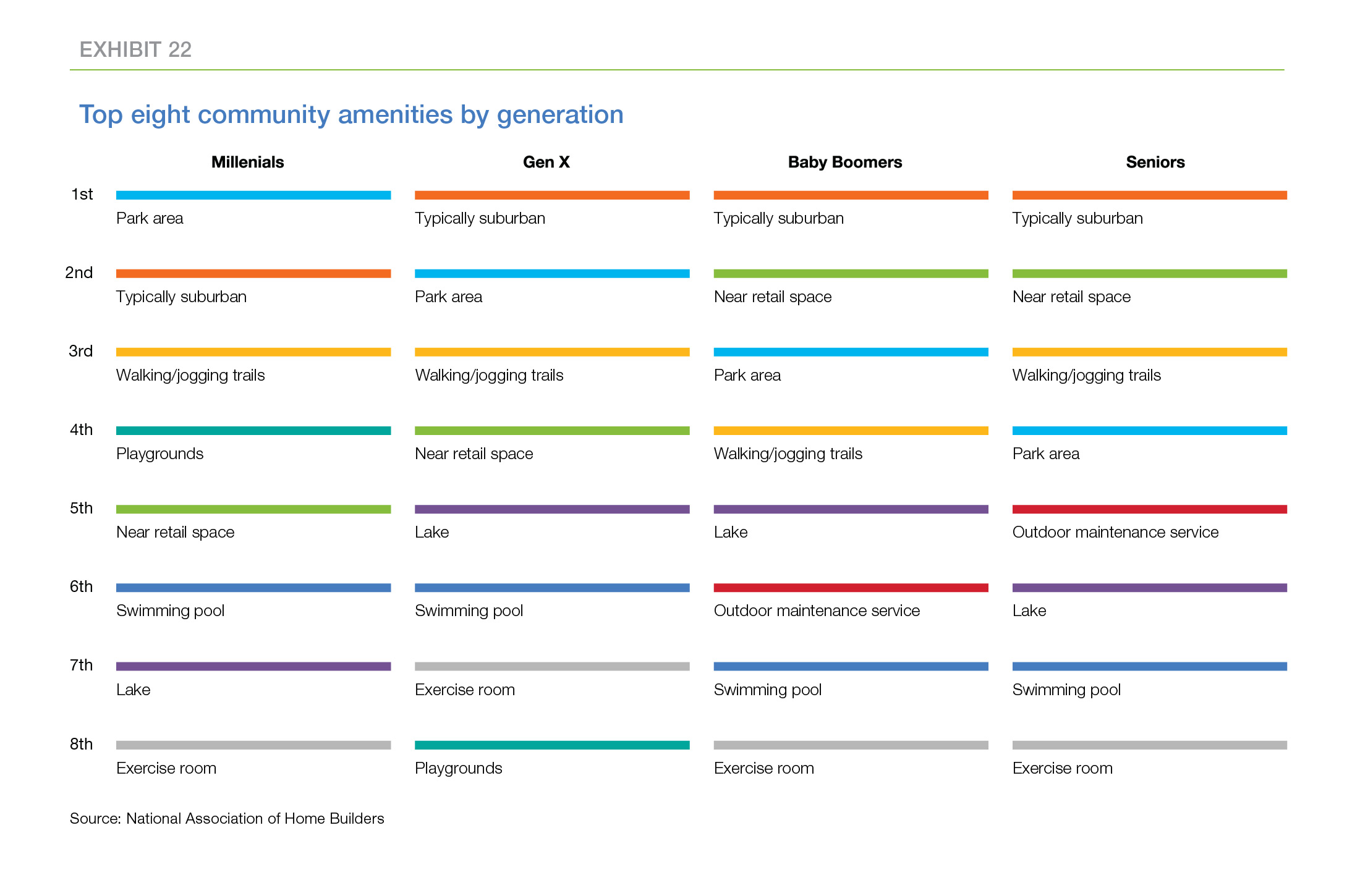 In the conventional wisdom on the housing life cycle, the Millennials should be providing a surge in first-time homebuyers, while older generations should be moving to the next stage of their housing life: Gen Xers should be trading up from a starter home to a larger home. Baby Boomers should be selling their homes to Gen Xers and downsizing, renting, or moving to an age-specific community. And the Silent Generation should be thinking about moving to assisted living or moving in with adult children.

With the possible exception of Gen X, people are ignoring the conventional wisdom. Millennials are taking longer to marry, start families, and buy their first homes. And the 55+ population are working longer, aging in place, or buying an additional home (or two) rather than winding down. Furthermore, they expect to be an active part of our housing economy for quite a while longer.

Apparently there is a lot more fun after 50 than there used to be.

2 Housing America’s Older Adults: Meeting the Needs of an Aging Population produced by the Joint Center for Housing Studies at Harvard University

3 Housing Preferences of the Boomer Generation: How They Compare to Other Home Buyers, Copyright 2016 by NAHB