Why are the Experts Pessimistic About the Future of Homeownership? 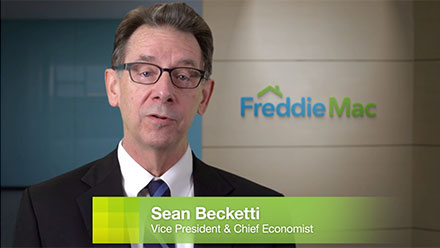 The national homeownership rate has been declining for over a decade. According to the experts, we can expect further declines. 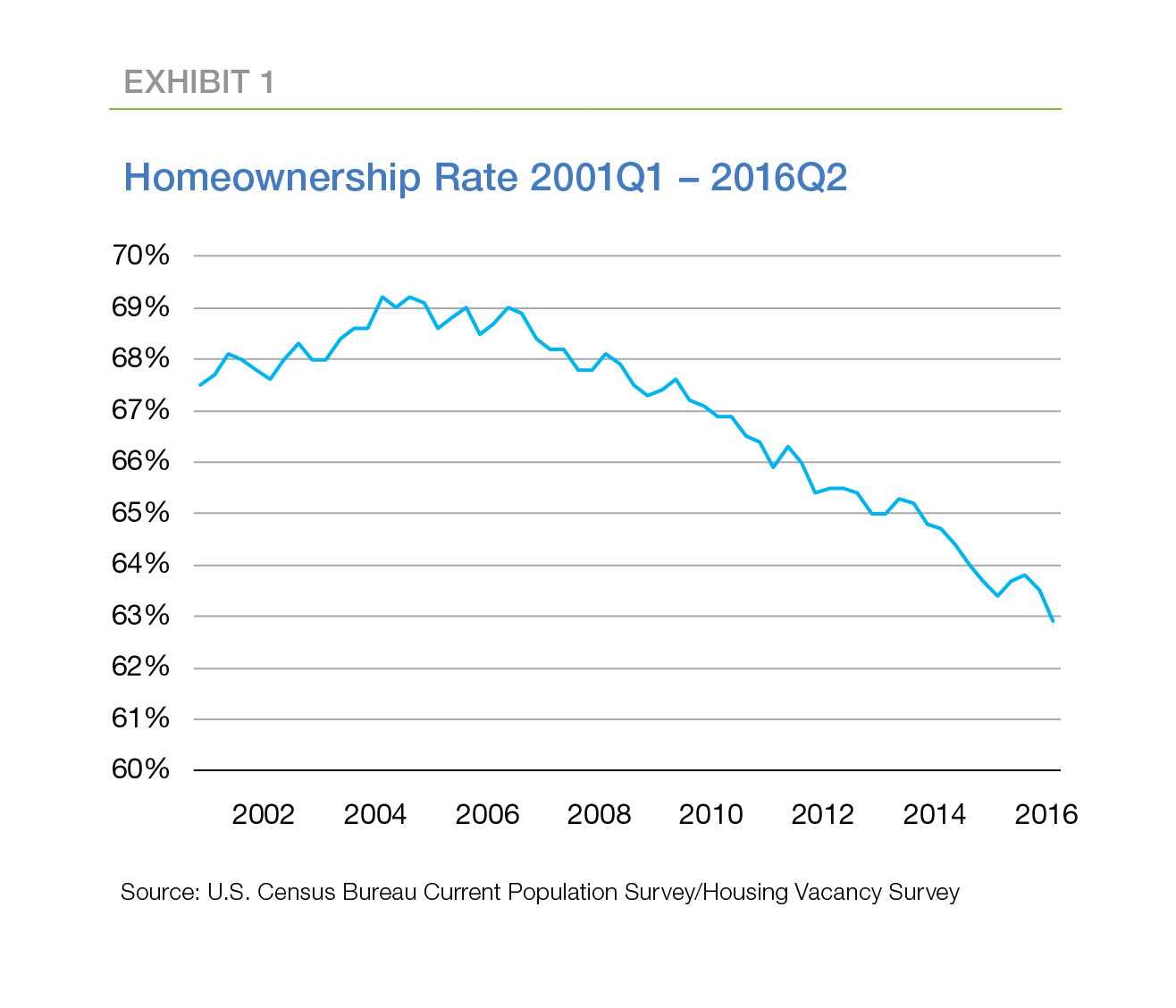 If the experts are right, the homeownership rate will decline even further in future decades. Homeownership rates below 60 percent are not out of the question according to these projections. How likely are these projections to come to fruition? What factors lead the experts to this conclusion? And, just as important, who will own a home? Will historically underserved groups recover the ground lost during the last decade, or are they likely to be stuck indefinitely at substantially lower rates of homeownership than the population as a whole?

The history of homeownership

For most of the first half of the 20th century, the homeownership rate in the U.S. varied between 44 and 48 percent (Exhibit 2). The return of military personnel from World War II combined with availability of low-interest mortgage benefits provided by the G.I. Bill triggered a surge in the homeownership rate, which jumped to 55.0 percent by 1950. The institutionalization of the 30-year fixed rate mortgage and public policy initiatives such as the creation of FHA, VA, and the GSEs provided additional support for homeownership. The homeownership rate reached 61.9 percent in 1960, then continued to climb, albeit more slowly, until it reached its peak of just under 70 percent in 2004. 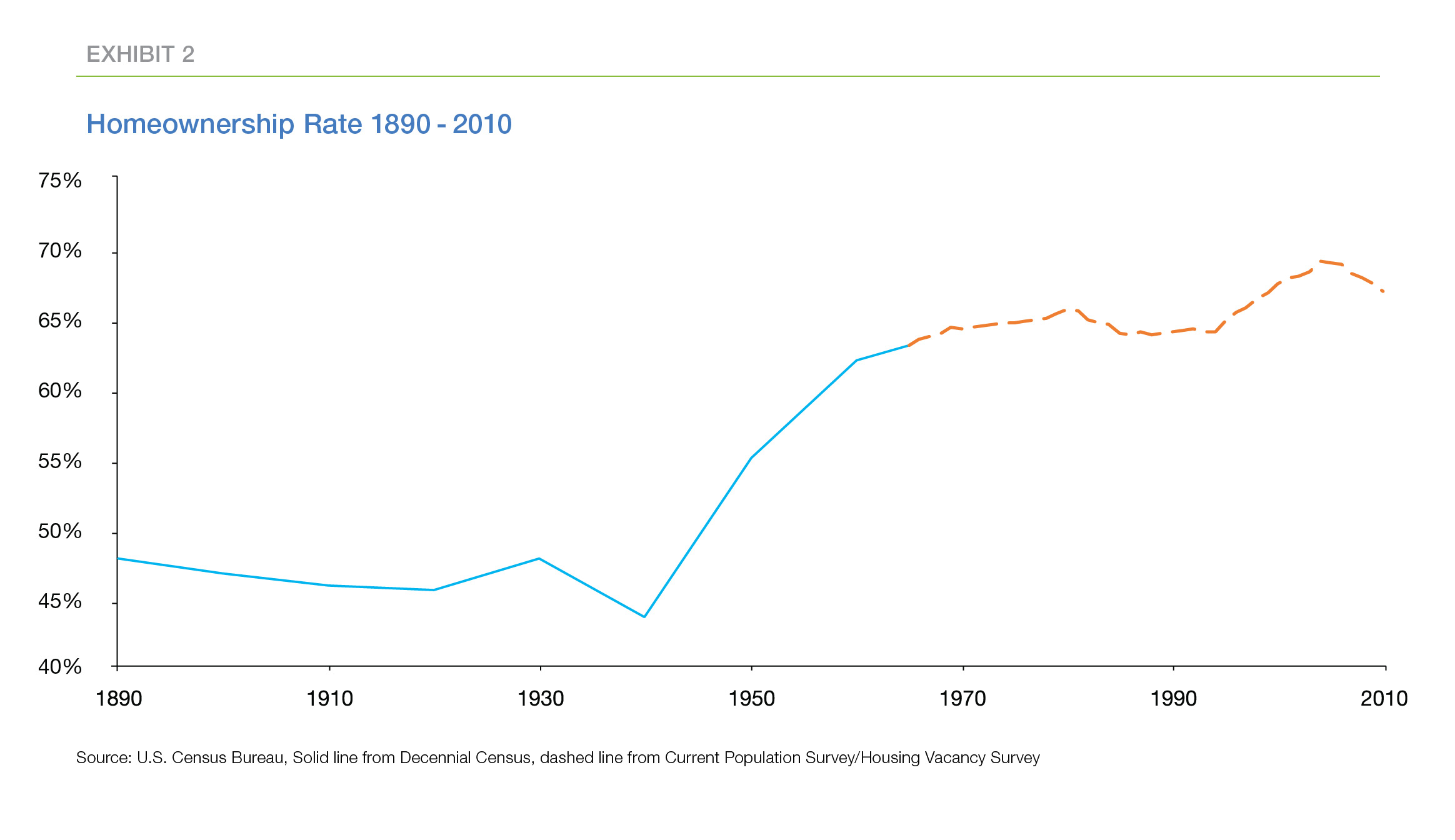 How to forecast homeownership 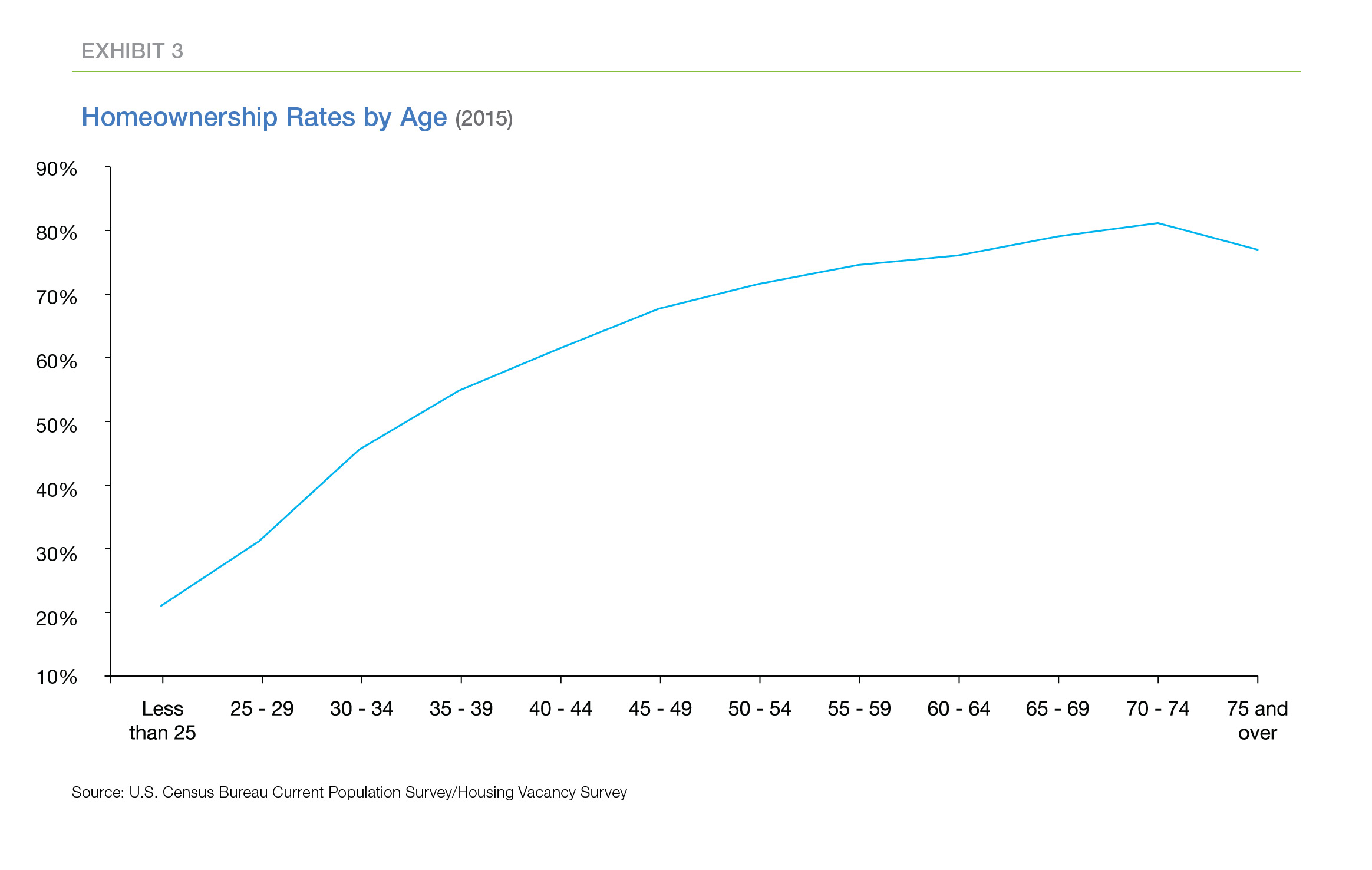 Historically, white, non-Hispanic households (Whites) have recorded the highest rates of homeownership. African-Americans (Blacks), Asians, and Hispanics typically have had homeownership rates 18 to 28 percentage points lower than Whites (Exhibit 4). These differences persist even after accounting for differences in income and education. 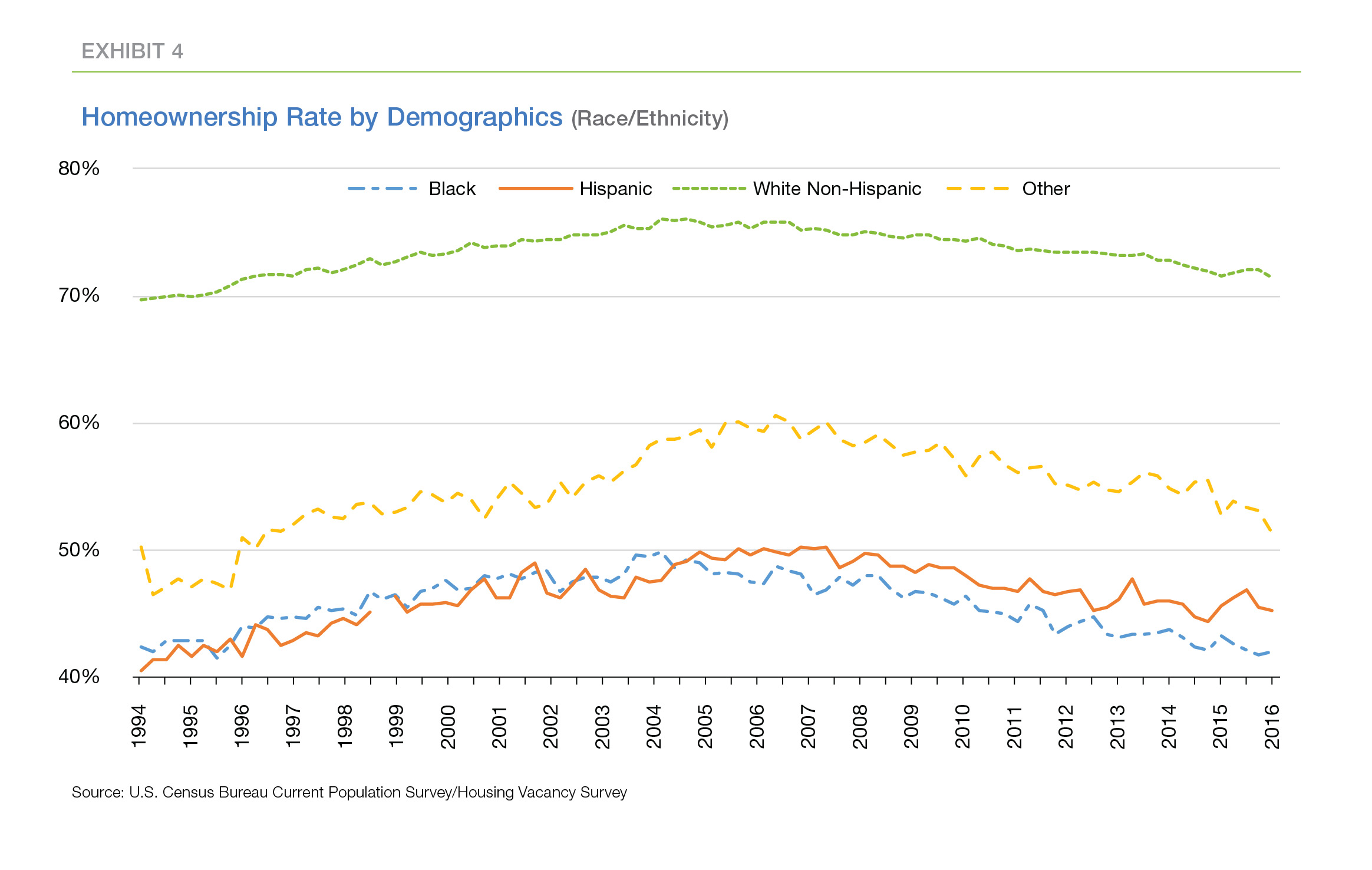 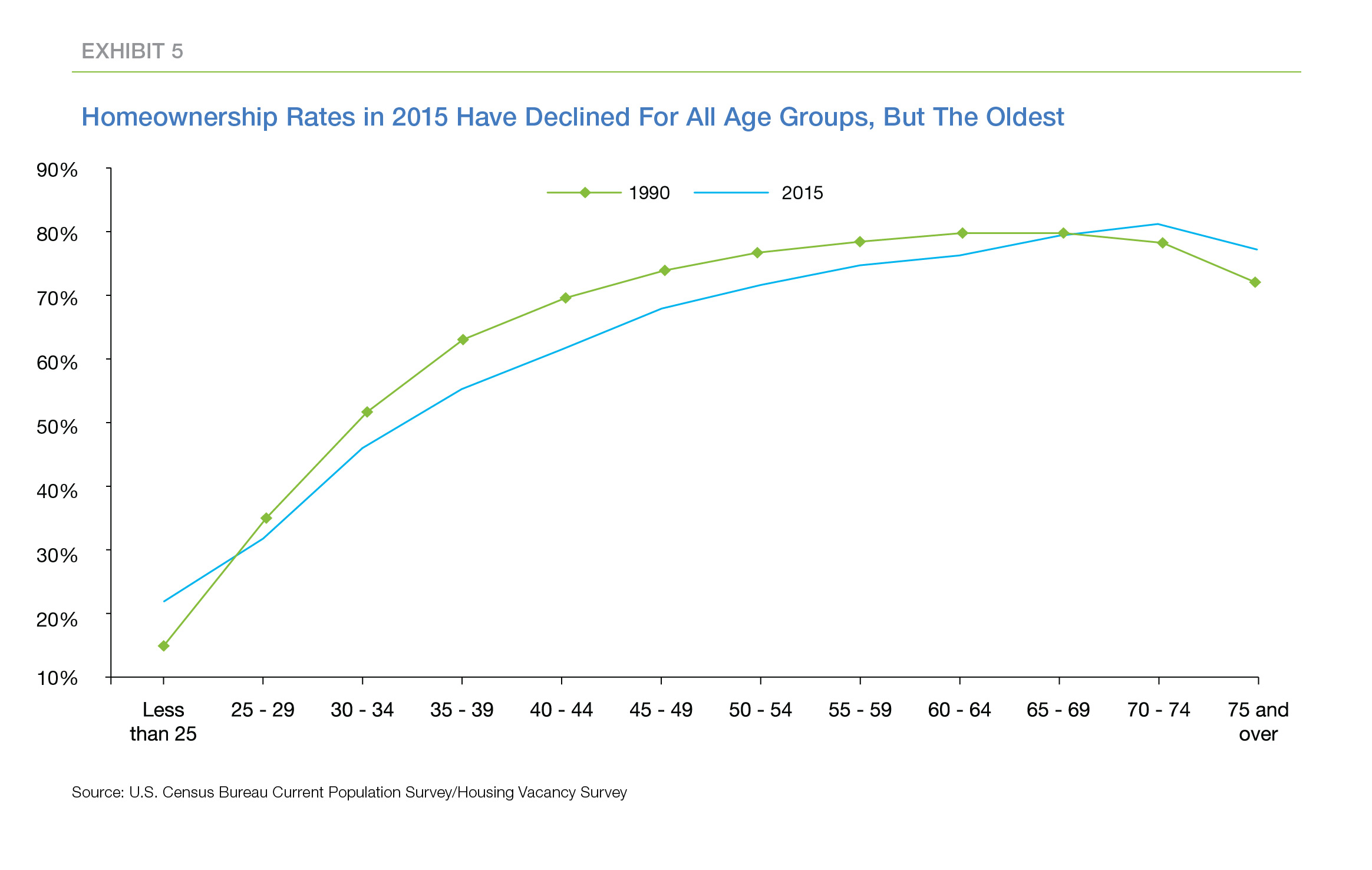 Why the experts disagree

Factors like those described in the paragraph above account for much of the uncertainty in projecting the future homeownership rate. Changes in the housing and mortgage industries, changes in public policy, changes in social attitudes, and macroeconomic shocks such as the Great Recession—all these and more may alter the future. Twenty years in the future, today's Millennial 35-year-olds will not act exactly like today's Baby Boomer 55-year-olds. Or perhaps they will. And this is where experts begin to part ways.

Exhibit 6 illustrates this issue. In 1990, the 35-to-39 year-olds had a homeownership rate of 63 percent. Today the homeownership rate among the same group, which are now 60-to-64 years old, is 76 percent, 13 percentage points higher than 25 years ago.

Experts have argued for different answers to this question—whether observed shifts in age-specific homeownership rates are permanent or temporary—and, as a result, have come up with different projections of the future homeownership rate. The Joint Center for Housing Studies (JCHS), a pioneer in this methodology for analyzing homeownership, assumes for the most part that recent shifts are temporary and that today's 35-year-olds will resemble today's 60-year-olds in 25 years. The Urban Institute (UI) has adopted the opposite approach. They assume that shifts like the reduction in the homeownership rate of 35-year-old Millennials reflect a generational difference that will persist as these Millennials continue through life.2

The Joint Center for Housing Studies (JCHS) and Urban Institute (UI) are not the only experts predicting future homeownership rates, and the range of professional opinion is much wider than is suggested by Exhibit 7. Last spring, the American Real Estate and Urban Economic Association hosted a symposium where seven experts debated the possibility that the homeownership rate could fall by as much as 20 percentage points by 2050. The papers from that symposium were published in CityScape and summarized by us in a previous article. And last year, the Mortgage Bankers Association proposed a more optimistic view of future homeownership rates. While the MBA's conclusions are on the high end of professional opinion, they are carefully reasoned and highlight the difficulty of projecting future homeownership.

Nonetheless, the JCHS and UI are recognized as the pioneers and leading experts on this question. We chose to focus on their approaches to emphasize the central role played by increasing diversity in projecting future homeownership rates and to question the critical assumption that the historical gaps in homeownership rates between demographic groups either cannot or will not be narrowed in future decades.

What do the experts predict? 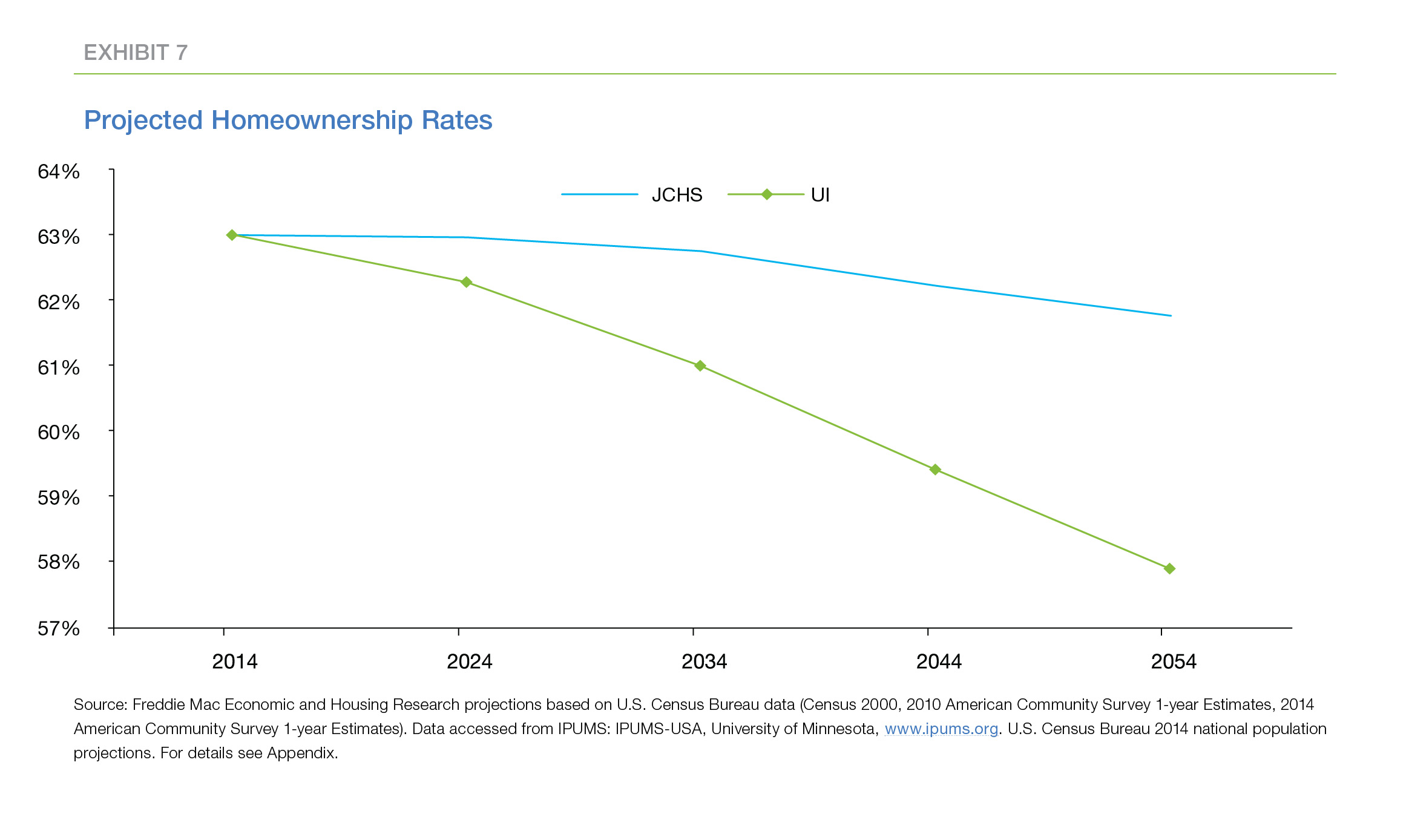 The shape of both of these projections—a relatively stable homeownership rate for a decade followed by a steady decline—represents the conflicting influences of an aging population but a more diverse one.

Homeownership increases with age, and the coming years will see an older America. For example, the Census Bureau projects the share of the population over 65 will increase from 15 percent today to 19 percent in 2025. The larger share of older Americans accounts for the near-term stabilization in the projected homeownership rate.

Counterbalancing the influence of aging is the projected increase in demographic diversity in the U.S. Non-Hispanic whites comprise 73 percent of the Baby Boom generation. In contrast, Millennials are much more diverse—only 59 percent of Millennials are non-Hispanic whites. As the Baby Boom generation inevitably leaves the stage, the future America will come to look more like the diverse Millennials than the white-dominant Baby Boomers. If historical demographic differences in homeownership rates persist, this increased diversity eventually will produce a lower homeownership rate. 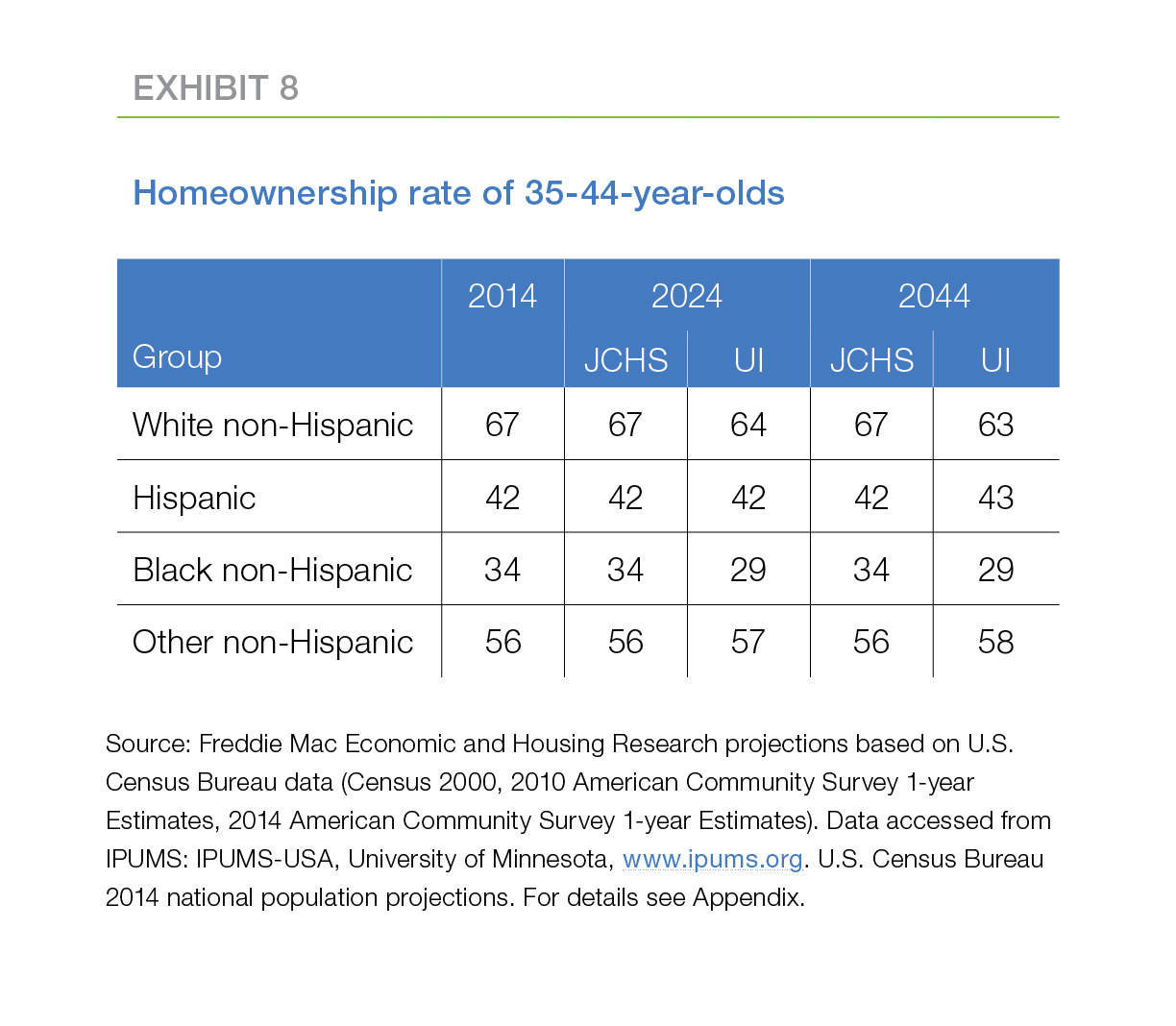 Is this future inevitable?

We believe these projections may be overly pessimistic. To begin, consider Exhibit 9 which displays two different projections of future homeownership rates. Both projections use the JCHS approach, but the projections are calculated using different starting points. The higher, solid line represents a projection based on the Census data available only through the year 20004. The lower, dashed line represents the same methodology applied to Census information through 2014. The earlier data suggested the homeownership rate in 2014 would be almost 66 percent, when, in fact, it turned out to be more than three percentage points lower. The gap between the two projections narrows a bit over time but still exceeds two percentage points as late as 2054. 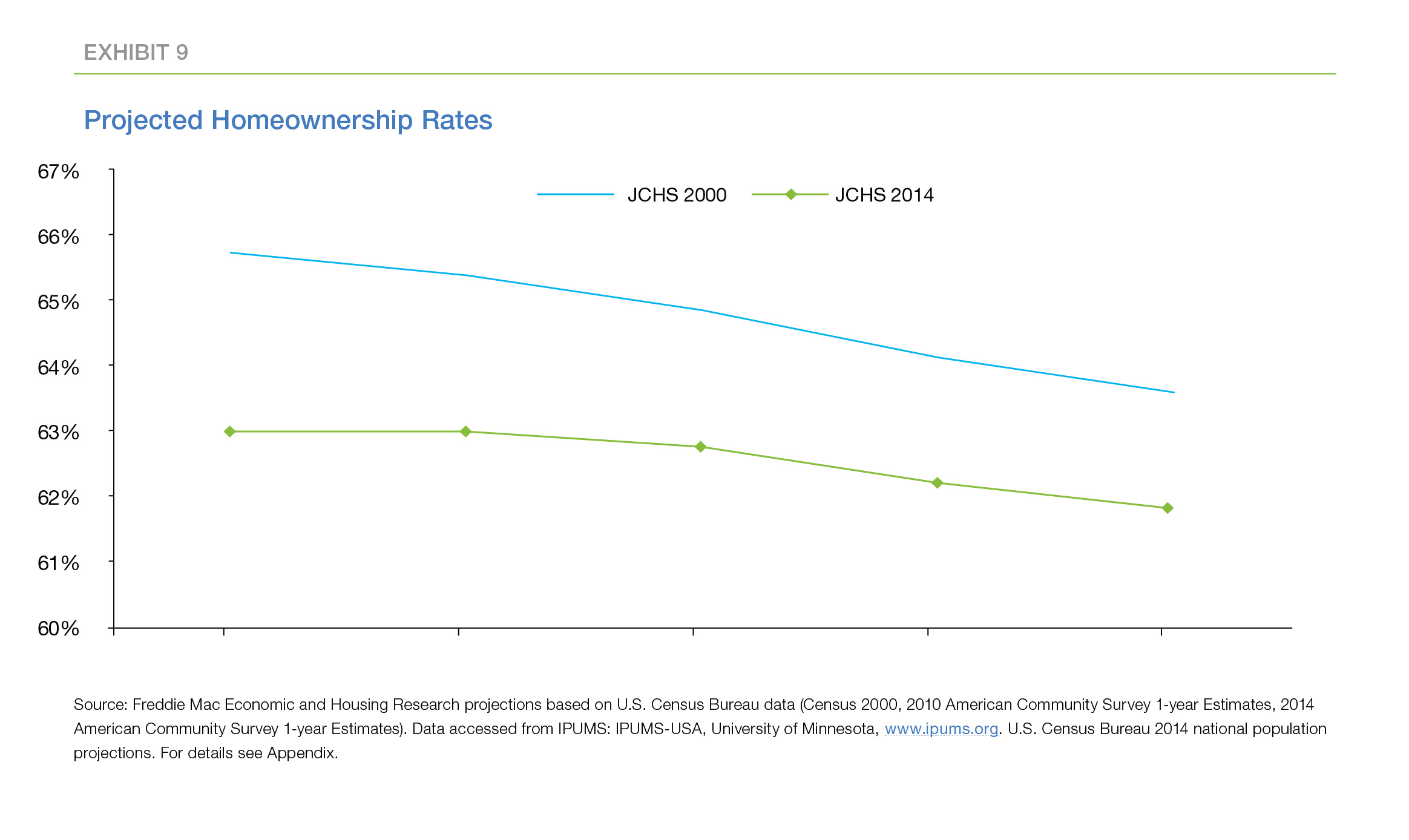 Admittedly, the years since 2000 have witnessed turbulence in the housing market of a magnitude that virtually no one foresaw. But that's the point. Both the JCHS and UI approaches project future homeownership rates by, in essence, applying some fancy arithmetic to current conditions. These approaches do not—nor do they claim to—incorporate future macroeconomic disruptions, significant policy changes, or shifts in social attitudes in their calculations. These types of influences ultimately will determine how accurate or off-target the JCHS and UI projections are.

And what types of unforeseen influences might arise? We can think of three, and we're sure there are many more we're overlooking.

To be sure, the projections of the JCHS and UI approaches provide a useful starting point for the discussion of the future of homeownership. They help us quantify "the things that May be only" if current patterns of behavior are unchanged. However, the points listed above remind us that the actual future will be determined by a combination of industry evolution, unforeseen economic shocks, societal shifts, and the difficult policy choices that our nation has yet to make.

Appendix: Data and methodology for the projections

We used data collected by the Integrated Public Use Microdata Series (IPUMS-USA)5 from the 2000 Census, 2010 American Community Survey (ACS)6 and 2014 ACS. The microdata allows us to tabulate homeownership rates by age and race/ethnicity of householder7.

We partition the entire non-institutional population into categories corresponding to the race/ethnicity of the individual and household. We construct age categories grouped in 10-year increments from 15 to 85 (i.e. 15-24 year-olds, 25-34 year-olds, … ,74-84 year-olds and 85+) and race/ethnicity categories corresponding to Hispanic, White non-Hispanic, Black non-Hispanic, and Other. We compute the headship and homeownership rate for each unique group for each of the three years (2000, 2010 and 2014).

1 However, as long as the future growth rates of each age/demographic group remained uncertain, homeownership rates could not be forecast perfectly.

2 This description oversimplifies the JCHS and UI analyses in order to highlight an essential difference between the approaches. For a detailed description of each approach, see JCHS Baseline Household Projections for the Next Decade and Beyond March 2014 and UI Headship and Homeownership: What Does the Future Hold? June 2015

3 The projections in Exhibit 7 represent our own calculations using the [data sources & Census projections]. The "JCHS approach" incorporates the assumption that the homeownership rates in each age/demographic group remain at today's levels. The "UI approach" incorporates the assumption that generational differences are permanent. Neither the Joint Center for Housing Studies nor the Urban Institute have reviewed or approved these illustrative examples. As noted above, the actual JCHS and UI approaches involve additional complexities.

6 Homeownership rates for the ACS are close to those observed in the Decennial Census.

What Drove Home Price Growth and Can it Continue?