Will the homeownership rate fall below 50 percent?

In this month's Outlook, we review recent economic developments and their impact on our projections for the remainder of 2016 and all of 2017. We then shift our focus to the future of the homeownership rate. Finally, we highlight recent trends in refinancing.

The surprisingly weak June employment report has spooked markets and put the Fed on hold. Nonetheless, other indicators suggest economic growth is poised to pick up from the anemic pace of the first quarter. Personal consumption expenditures were up 1 percent in April led by strong vehicle sales and recovering gasoline prices. This marks the fastest pace since August 2009. Retail sales were also up 1.3 percent for the month of April after falling 0.3 percent in March; yet another indication that consumers are driving the economy forward in the second quarter. Finally, crude oil prices have also stabilized somewhat, and are now at their highest level since October of last year. Given these recent data, we still expect growth rebound in the remaining quarters of 2016. Our outlook calls for gross domestic product to grow at 1.9 and 2.3 percent in 2016 and 2017, respectively.

Inflation remains persistently low, even as gasoline prices rose 8.1 percent in April. Overall, the Consumer Price Index for April continues a trend of anemic growth rising only 0.4 percent and 1.1 percent over 12 months. Other inflation measures, such as the Core PCE price index, up only 1.6 percent year-over-year, are also falling well short of the targeted 2 percent inflation mark set by the Fed. As a result, we are still expecting inflation to stay around 1.4 percent in 2016 and to move up to 1.9 percent in 2017.

Even with weak price growth, the improving economic conditions in recent months added to the speculation of a Fed rate-hike occurring as early as June. However, May's employment report halted all such speculation, once again putting into question when the Federal Reserve will lift rates. Growth in total nonfarm payroll employment was limited to 38,000 in May, the lowest since September 2010. Losses in the mining, information (due to an employee strike), and manufacturing sectors were the major causes. Downward revisions in March and April equaling 59,000 contributed to the disappointing report. The average growth in job gains for the past five months has now fallen to 150,000 per month, much less than the average pace of 229,000 for 2015.

Additionally, the decline in the unemployment rate to 4.7 percent was not due to more people working, but to fewer people actively seeking jobs. One of the few positive takeaways from the May jobs report was average hourly earnings, which rose 2.5 percent over the past year. Future revisions may soften the blow, but we believe May's report was enough to put the Fed on hold for at least another month. Nonetheless, we believe that May's report will not be enough to heavily impact our outlook and we still maintain that unemployment will average 4.9 percent in 2016 and 4.8 percent in 2017.

Domestic and international investors continued to flock to the safety of U.S. Treasury bonds keeping yields around 1.8 percent in May, unchanged from April. The 30-year fixed-rate mortgage, which closely follows the 10-year Treasury yield, fell 1 basis point in May to 3.6 percent, marking yet another low point for 2016 and the lowest monthly average since May 2013. Despite rates stalling over the past two months, we still believe they will move up in June, allowing for the 30-year fixed to reach 3.7 percent in the second quarter and averaging 3.9 percent in 2016 and 4.5 percent in 2017. For short-term rates, we are still assuming a rate hike in the third quarter.

The persistence of low rates has benefited the housing market as seen in various April releases. Housing starts rose 6.6 percent in April to a seasonally adjusted annual rate of 1.17 million units. Starts continue to trend upward since the end of the recession as builders attempt to meet increasing demand. Existing-home sales for April came in at an annual rate of 5.45 million homes, 1.7 percent above March's upwardly revised figure of 5.36 million. New home sales grew a very impressive 16.6 percent in April to a seasonally-adjusted annual rate of 619,000 units, the highest rate since January of 2008. The strong demand in April marks the start of the spring home buying season and it was amplified by historically-low borrowing costs. This surging demand for housing does imply that continuing supply constraints will create some upward pressure on house prices. Therefore, we have increased our house price appreciation forecast in 2016 by 20 basis points to 5.0 percent, and in 2017 by 40 basis points to 4.0 percent.

Will the U.S. homeownership rate fall below 50 percent?

We have been saying 2016 will be the best year for housing in a decade. This month's forecast continues on that same theme with home sales and national house prices projected to reach their highest levels since 2006. Despite a generally weak economy, we expect housing to be an engine of growth. Residential investment will directly boost growth, and higher home equity will bolster consumer confidence, which should lead to higher consumer expenditures. 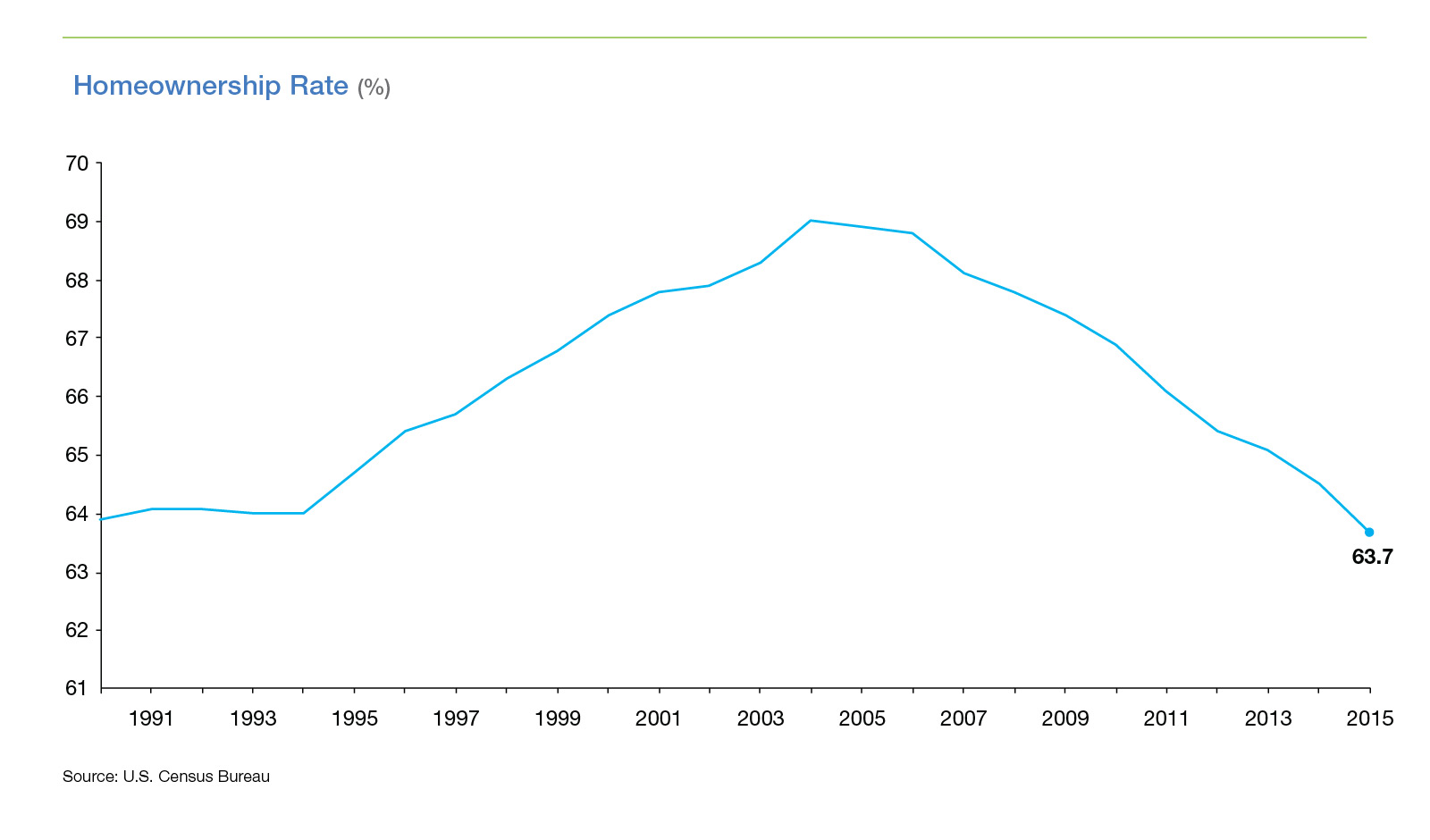 But how far? Could the homeownership rate fall below 50 percent?

The focal point of the discussion was if the homeownership rate could fall—if at all—as much as 20 percentage points. Acolin, Goodman, and Wachter believe it is plausible in a market where rents and house prices increase somewhat faster than inflation. The paper points to California as a representative of what the nation could become.

Sandy beaches and a Mediterranean climate probably aren't in the cards for Nebraska or Vermont, but rather the United States of the future is expected to have a similar demographic makeup to the one found in California today. Additionally, California has high rental costs and home prices relative to income. The high cost of home prices could result in less people opting to own a home due to the lack of monetary freedom to prepare for a larger down payment. This could even include those that may qualify for Freddie Mac's three percent down payment Home Possible product. Furthermore, they believe that if this trend continues it will preclude renters from ever becoming homeowners.

Ultimately, Acolin, Goodman, and Wachter conclude the long term outlook is the homeownership rate will continue to decrease. Some experts agreed with the qualitative outcome but differed on the severity and emphasized different drivers. Nelson (2016) believes that homeownership rates will continue to decrease, and the current trends driving down homeownership will be difficult to reverse. Similarly, Myers and Lee (2016) believe the effects of the Great Recession will echo forward for decades driving down homeownership. However, they believe a major decrease in homeownership is unlikely. Myers and Lee state that a major cataclysmic event such as a 35-year perpetual recession would be necessary for a 20 percentage point decrease.

Haurin (2016) contends that a 20 percent decrease in homeownership is unlikely. Haurin does acknowledge that homeownership may experience another one to two-point decrease by 2020, but suggests that a gradual increase should occur after 2020, countering the decline debate. He explains that a 20 percent decline would require a combination of plunging rents, surging user costs of ownership (e.g. higher house prices and/or mortgage rates), and adverse demographic changes, all of which Haurin argues are unlikely to occur. Furthermore, he contends that in about a decade, potential homeowners will have adjusted to the need for higher credit and larger down payments.

There are several factors that will drive the homeownership rate. In this section we review some of the most important drivers.

Projections for the homeownership rate are summarized in the table below:

*Based on slow California scenario

We're presently conducting our own research into the factors that will drive the homeownership rate. In future articles, we plan to weigh in with additional details on how these factors might affect homeownership and the future of the housing market.

Full details are available at the above link, but there are a couple of key trends worth mentioning:

Following the financial crisis, for most quarters between 2010 and 2013, the “cash-out” share has fallen and ranging between 15-to-20 percent. In recent quarters the share of mortgage with loan amounts that were at least five percent higher than the original mortgage balance, has been rising – marking 42 percent in the fourth quarter of last year and 40 percent in the first quarter of 2016. During the first quarter of this year an estimated $10.9 billion net dollars of home equity were converted to cash during the refinance of conventional prime-credit home mortgages, down from $11.0 billion in the fourth quarter of 2015 and substantially less than during the peak cash-out refinance volume of $84.0 billion during the second quarter of 2006.

5 See for example, our September 2015 Insight for discussion: http://www.freddiemac.com/fmac-resources/research/pdf/sep_2015_public_outlook.pdf

7 Herbert, C. E., McCue, D. T., & Sanchez-Moyano, R. (2013). Is Homeownership Still an Effective Means of Building Wealth for Low-income and Minority Households? (Was it Ever?). Homeownership Built to Last.

8 Bracha, A., & Jamison, J. C. (2012). Shifting confidence in homeownership: The great recession. BE Journal of Macroeconomics.

10 For an early example see: Pitkin, John R., and George S. Masnick. 1980.Projections of Housing Consumption in the U.S., 1980 to 2000, by a Cohort Method. Annual Housing Survey Studies, No. 9. Washington, DC: Department of Housing and Urban Development.